A column of grey smoke drifts lazily over the port. Moments later it is obscured by a milky-white nimbus that quickly balloons, turns halo-shaped and then vanishes. In its place, a dirty cloud stains a section of sky, sprouting from the earth like a giant fungus. Filmed from a boat off the coast, the video shows the devastating force of the Beirut explosion last summer that killed more than 200 people, injured thousands and left around 300,000 homeless.

Into these horrors marched a small team from Télécoms San Frontières (TSF). Arriving just two or three days after the blast, the team was on its usual mission to provide communications services for people in a disaster area. But the circumstances were anything but familiar. Lebanon's healthcare system was already buckling under the pressure of the coronavirus outbreak. Amid an economic crisis, power cuts were rife. And chemicals released during the accident remained a potential hazard. "There were lots of risks," said Rudolf Gordon-Seymour, TSF's head of international funding. 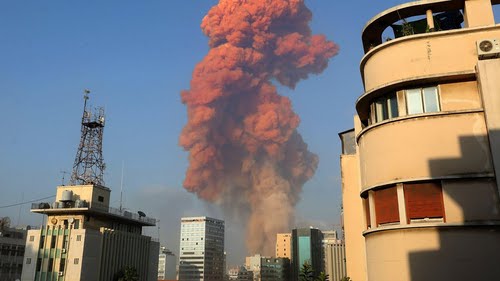 Moments after the Beirut explosion.

Established as a non-governmental organization (NGO) in 1998, TSF draws on the expertise of telecom engineers and other professionals who have often given up well-paying jobs in the private sector to work for the non-profit group. Because terrestrial infrastructure is usually damaged or unavailable in the places they go, TSF has typically relied on satellite technology for an immediate fix. Arrangements with Inmarsat and Eutelsat, two satellite operators, have ensured there are minutes and channels for emergency use.

In Beirut, TSF encountered disaster victims who had urgent needs for medical, psychological and financial support. With a relatively small number of its own people on the ground, it looked to other, local NGOs for staffing. Live Love Lebanon supplied volunteers for an emergency call center while TSF took charge of setting up the networks and applications required for a communications service. First and foremost, that meant rolling out a telephone line that was free of charge. "There are no toll-free numbers in Lebanon, which we hadn't encountered before," said Gordon-Seymour.

TSF's real innovation was the development of a fully automated system for collating all the requests that came in from disaster victims. To do that, its engineers designed a software bot that could be linked to WhatsApp, the region's most popular Internet messaging application. "Volunteers could just see the requests come in and weren't necessarily having to take phone calls direct," explained Gordon-Seymour.

It worked so well, in fact, that TSF was able to boast around 1,200 beneficiaries of the automated service in October last year, two months after the explosion. The system meant volunteers could efficiently send requests to other, relevant NGO partners. "It was a really coordinated effort," said Gordon-Seymour. With it, TSF may have a template for similar crises in future.

Besides illustrating the good work that TSF has been doing for more than 20 years, the Beirut experience proves inventiveness is not alien to the non-profit sector. If advanced technologies including 5G still have little relevance for TSF, its engineers have taken satellite systems to the very limits of performance. "We have for years been trying to do almost the impossible with the bandwidth available to us and the added latency headaches you get with satellite," said Gordon-Seymour. "We have had to spend a lot of time on the software engineering side to push as much traffic over the smallest pipe possible."

A proliferation of new low-orbit satellites could be a game changer for his organization, and Elon Musk's SpaceX is already involved in trials of forthcoming technologies, Gordon-Seymour notes with encouragement. But software automation and satellites are not the only areas in which TSF has performed magic. Off-the-shelf equipment provided by partners is routinely taken apart and customized to ensure it is "fit for purpose" in the most challenging conditions. And technicians are often forced to rely on unconventional solutions for power requirements. "Our engineering team is probably the most innovative I have ever come across," said Gordon-Seymour. "They will connect to a car battery if necessary."

Coronavirus remains a particular challenge for an organization that needs to fly its people around the world as soon as disaster strikes. In 2020, TSF managed to overcome various travel restrictions on two emergency deployments, despite the additional layer of complexity the pandemic brought. At the same time, Covid-19 has made connectivity even more critical for people in a crisis, highlighting the importance of TSF's role. Last year in Turkey, the NGO helped to set up a distance-learning platform for children at a Syrian refugee camp, after normal educational facilities were closed.

Amid all the talk of 5G, open RAN and cloud-native networks, TSF is rarely a part of the day-to-day industry conversation. But its efforts surely deserve just as much recognition as the latest breakthrough in massive MIMO or optical fiber, especially given the sacrifices its employees have often made. "They work crazy hours, their qualifications to do the job are incredible," said Gordon-Seymour about TSF's engineers. "They could leave TSF tomorrow, get paid five times as much and work half the hours, and so their hearts are in the mission of TSF."