With his roadie-for-Steppenwolf looks and tendency to lob expletives into investor calls or Twitter rants about rivals, John Legere was not your conventional telecom CEO. At T-Mobile US, the company he led for nearly eight years, Legere made a professional habit of calling BS on AT&T and Verizon, or "Dumb and Dumber," as he named them. He got away with it partly because his own BS quotient was usually low. But not always, as that infamous polemic about jobs would show.

Published on T-Mobile's website on April 4, 2019, the polemic derides opponents of T-Mobile's planned merger with Sprint, people who warned the deal would claim thousands of jobs. Critics were trying to scaremonger and mislead to preserve the status quo, wrote Legere. Nervous that regulators might see further reason to block the deal, he amplified a promise made when it was first announced a year earlier. "This merger is all about creating new, high-quality, high-paying jobs, and the New T-Mobile will be jobs-positive from Day One and every day thereafter," he vowed. 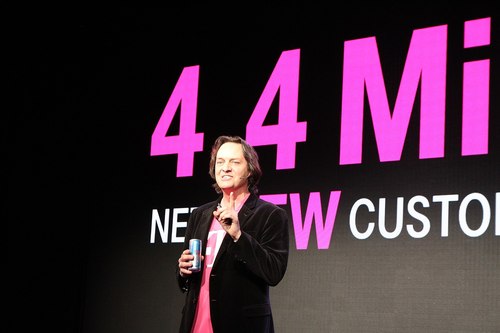 Three years on, the only parties guilty of any misleading would seem to be Legere and T-Mobile. When he wrote those lines, his own company had just reported a headcount of 52,000 employees in its annual filing with the US Securities and Exchange Commission (SEC). Sprint, at the time, employed 28,500 people for a combined workforce of 80,500. Two years later, after the deal was done, about 5,500 jobs had disappeared. Nor have any been added in the last year, the latest SEC filing shows. Jobs-positive this merger was not.

It is not as if Legere's words are equivocal. He and his employers could have restricted themselves to arguing that a bigger and better 5G network would have positive knock-on effects, creating jobs in the wider economy. That would be much harder to disprove. They could also have left out the bit about "Day One," insisting a combined and stronger business would outgrow rivals and eventually need to bulk up its workforce. They did not.

What penalty will a T-Mobile now led by Mike Sievert  more grown-up Harry Potter than rock-band crew member  pay for breaking a promise used to sway competition authorities? None, of course. Undoing the merger would be impossible after almost two years of integration, and in no one's interest. But if regulators believed any of Legere's claptrap about jobs, they were fools. Mergers are nearly always about juicing profits by cutting costs. And one of the easiest ways to do that is via layoffs.

In fact, not cutting jobs after a merger would be stupid from an investor perspective. No operator needs two core network managers or two shops in the same midsize town. Deutsche Telekom, T-Mobile's German parent, had also been upfront about the savings it aimed to realize in documents that were a mishmash of contradictions.

"Synergies" (a euphemism for cuts) of $6 billion were possible through "store consolidation," "site decommissioning" and similar antics, DT said. That was in the same April 2018 presentation where two slides earlier it insisted the merger was about "creating new jobs day one with investment to expand customer service, retail footprint and 5G buildout."

Quite feasibly, regulators did not care, or did not care enough. One view in regulatory circles was that job prospects would have been even worse if the merger were blocked. Under the control of Softbank and the Japanese conglomerate's a-few-good-bets CEO Masayoshi Son, Sprint was the very opposite of its name. Headcount fell from 30,000 employees in March 2016 to 27,000 four years later, weeks before the deal closed. History is filled with examples of misjudged government intervention to prop up ailing businesses and prevent unemployment. Typically, they just fail later and even more catastrophically.

Again, this was not the case made by T-Mobile, and it provides no excuse. Its only real defense is that opponents described a far worse scenario, predicting job losses would run to 20,000 or 30,000. But that is hardly consolation for the employees of a sector that has shrunk dramatically in recent years.

Since 2017, cuts by AT&T, Verizon and T-Mobile have claimed more than 120,000 jobs, an astonishing 23% of their combined workforce. The divestment of business units does explain a good chunk of this reduction, and yet the annual revenues generated by these companies have risen a striking $23.1 billion over this period, an increase of more than 6%. Per employee, the big four made sales of just less than $700,000 in 2017. For the big three last year, it was a flat $1 million.

Employee numbers at US telcos 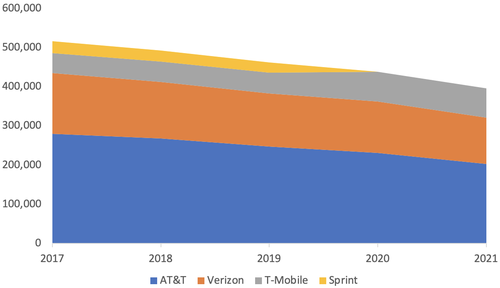 (Note: end-2017 numbers for AT&T include the Time Warner business it was due to acquire the following year)
(Source: Companies)

Those trend lines point to a troubling message for employees: Operators can generate more money than they did in the past with fewer people. No firm needs so many thousands of store assistants when customers would rather buy their phones and service plans online. AT&T has been asking those same customers to install home broadband equipment instead of paying technicians to do the job. Software is hollowing out network operation centers. Telcos compete to have the most automated systems. To be "zero touch" is to achieve telecom nirvana. Executives do not even say it with any trace of awkwardness, despite the ramifications for staff.

This has been evident now for years, providing another reason to be skeptical of T-Mobile's promises in 2019. Automation's apologists say it is nothing new and that previous rounds stoked the same concern, eventually producing new jobs no one could envisage at the time. Currently, the only imaginable opportunities lie in software. Even that is starting to write itself.

Where have jobs gone in the meantime? Into the Uber economy, perhaps, or the grey one. If many other formal sectors are also ridding themselves of staff, at least one is not. Amazon, Google and Microsoft, the giants of Big Tech, have added nearly 1.2 million employees since Legere promised to be a jobs creator, with Amazon responsible for most of them. The increase is ten times the number laid off by US mobile operators. And that, frankly, puts telecom and Big Tech into perspective.