From a broad point of view, next-generation access network activity slowed for many cable operators in 2020 as they focused on splitting nodes and adding capacity to existing network gear to keep up with the traffic surge fueled by the pandemic. However, Comcast said its work around network virtualization and the use of new AI and machine learning techniques that optimize and enhance the performance of the access network accelerated over the past year.

"We have not slowed down anything  We have not stopped and not blinked," Elad Nafshi, senior vice president of next-generation access networks, at Comcast Cable, said. "Everything I've asked for from an access network standpoint, the company has stood behind and provided investment."

Those investments, he said, bore fruit in 2020, a year in which Comcast and other cable operators and ISPs saw an unprecedented surge in network traffic driven by a pandemic that forced millions to work and school from home.

In a report issued this week, Comcast estimates that 2020 peak Internet traffic on its networks rose 32% over pre-pandemic levels, and by more than 50% in some markets in March 2020. The operator also estimates that its network experienced almost two-year's worth of traffic growth in the first four months of pandemic-related shutdowns that began in earnest roughly a year ago. 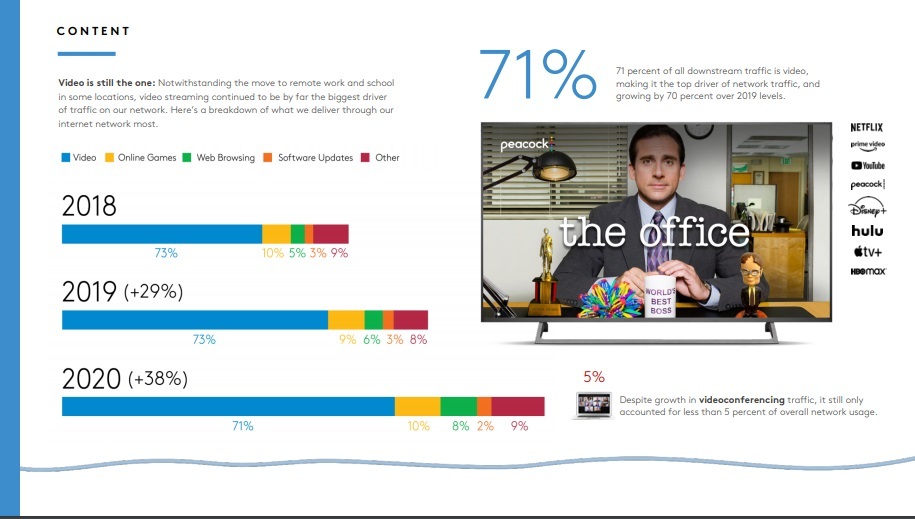 Source: Comcast 2020 Network Report
Click here for a larger version of this image.

The pandemic hit the upstream (peak upstream levels on Comcast's network increased 56% versus 2019) thanks to a boost of apps such as videoconferencing, which still only accounted for less than 5% of overall network usage for Comcast. Comcast also saw a 38% jump in downstream traffic year-over-year. Downstream traffic volumes were still 14x that of upstream traffic in 2020.

"It's been a year like no other," Nafshi said.

From an application standpoint, video streaming accounted for 71% of all downstream traffic, and was up by 70% over 2019 levels. Online gaming and software downloads were also up 10% and web browsing rose 8%.

Nafshi said new software releases for gaming consoles, such as a new issue of Call of Duty, can swing downstream needs up by about 10%. "Those are pretty wild swings when you are running a network as large as ours," he said.

Amping up AI and machine learning

The pandemic caused Comcast to fast-track the deployment of "Octave," an AI-powered system designed to improve the overall performance of the access network, including a 20% increase in upstream capacity. With Octave, Comcast feeds anonymous polling data from tens of millions of devices on its access network to an AI decision engine. This engine analyzes the information and then sends commands to the cable modem termination system to dynamically set the highest supported modulation profiles of individual modems on the network.

Splitting nodes, a physical move on the network that expands the amount of capacity available to a given service group, has been a tool of the trade during the pandemic. Comcast has also been splitting nodes in certain instances, but leaned more heavily on more flexible, software-driven techniques such as Octave to improve network performance more rapidly, and at a greater scale.

"You're not going to be able to split nodes fast enough," said Nafshi, who estimates that Comcast has about 230,000 nodes in its networks. "There needs to be something else  You don't split nodes for a Call of Duty patch."

Nafshi said the AI and ML and network virtualization techniques Comcast used to get a handle on pandemic-driven data usage centered on a "detect, deflect, mitigate" concept. Boiled down, the system is capable of detecting where the capacity needs are down to the individual home, automatically mitigating around that by setting the modulation of the model down to the lowest level allowed based on the current traffic conditions, and then dispatching a fix that brings the modem back to a higher level of modulation that delivers more bits per hertz.

"That ability to really flex the network as the needs arise with that level of real-time sophistication and real-time visibility that we've rolled out  has truly been transformational for us," Nafshi said.

Comcast currently is not providing much fresh info about activities centered on Full Duplex DOCSIS (FDX), a technique that allows upstream and downstream traffic to run in the same block of spectrum, or any of its grander plans related to "mid-split" or "high-split" upgrades that bulk up the amount of capacity dedicated to the upstream.

But it wasn't standing still, either. Comcast recently kicked off a trial in Jacksonville, Florida, that uses a high-split (raising the amount of usable upstream spectrum to 204MHz) in tandem with network virtualization technologies to deliver symmetrical speeds of 1.25 Gbit/s on the hybrid fiber/coax (HFC) network.