BT makes nearly all its money from UK consumers and businesses, so it's naturally focusing its recruitment efforts on, er, India. The aging and ailing telecom incumbent has just announced its plans to hire another 2,800 people for its newish Digital arm, where software types bash out the code BT hopes will reverse its fortunes. Just 1,000 of these roles will be filled in the market where BT generates more than 80% of its revenues, however. The bulk will be in Bengaluru and Gurugram.

Coming so soon after tens of thousands of BT workers in the UK voted to go on strike over pay, the news could seem like management's way of flipping the bird at the irksome employees whose actions threaten broadband blackouts this summer. But software engineers in Bengaluru won't be rewiring street cabinets in Blackpool. This is probably more like the software equivalent of making cars in Slovakia for eventual sale in France. India has a reputation for both software expertise and low wages, while the UK is known more for talent shortages and demanding people. 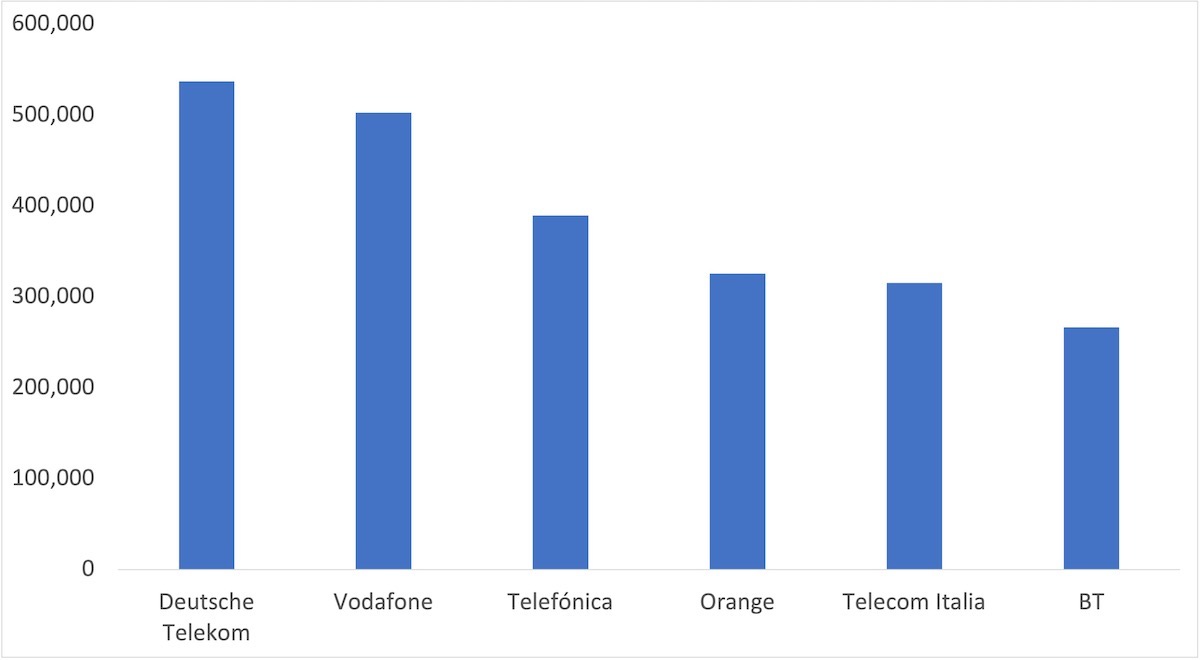 It's not the most original plan, clearly mimicking the scheme Vodafone announced last year to add another 7,000 software engineers to a team then comprising 9,000 (Vodafone recently said that the figure has risen to about 10,400 and it expects to be at 11,500 by March 2023). Much like its rival, BT thinks software investment and all that goes with it (cloud, artificial intelligence, machine learning, etc.) offers the best hope for revival after a six-and-a-half-year period in which its share price has dropped 60%. The planned recruitment will boost the size of BT Digital to 6,300 people by 2024.

What's currently unclear (BT dodged this question and others when emailed by Light Reading) is whether the overall headcount is set to go up or down. At the end of March, BT Group employed 98,370 people altogether, according to its financial reports, making it (on paper) one of the most bloated and inefficient telcos in Europe. It generates half as much in sales per employee as Vodafone (just £211,904, or US$252,080, last year) and less than any other major European incumbent, Telecom Italia included.

Yes, the workforce has shrunk from an apparent all-time high of 106,742 employees in 2018. Back then  under previous, more expensively groomed leadership  BT announced it would cut 13,000 jobs, mainly in back-office roles and mid-level management. Years after privatization, there still seemed to be a surplus of civil-servant types strolling around with clipboards and arranging unnecessary meetings. But the reduction since then is just 8,372 jobs.

Has the program been halted? Are cuts that were supposed to be done by 2021 still happening? Or did BT neglect to say that the net figure would be much lower than 13,000 because of recruitment elsewhere?

Challenged on this topic, BT said: "We've delivered gross annualized cost savings of £1.5 billion [$1.8 billion] over the past two years and have extended our cost savings target of £2 billion [$2.4 billion] by end FY24 to £2.5 billion [$3 billion] by end FY25." BT's profit before tax did rise 9% in its last fiscal year, despite a 2% drop in sales, although its adjusted earnings (before interest, tax, depreciation and amortization) were up only 2%.

Without other cuts, though, BT's headcount would hit 101,170, and software programmers are not cheap, even in India. Like Vodafone, BT thinks it can slash costs by phasing out subcontracted labor it would no longer need with a bigger software team. But unlike Vodafone, which is pumping up its software muscle through a mixture of recruitment and retraining, BT does not seemingly plan to fill any of the 2,800 Digital vacancies through redeployment of existing staff.

The plan at least shows that globalization still lives in some battered, post-Brexit form. "This is an opportunity for us to reinforce the importance of India to BT today, and how we are going to build on the base there and capitalize on the incredible resources available in that market," said BT when asked if Indian software types were cheaper and better than UK ones. Skills shortages exist in both the UK and India, BT insists, and its dual-country approach can minimize the risk.

India certainly looks more important to BT than BT does to India. Whether it continues to look important could depend on India's friendliness toward Russia because, in today's warring world, you don't want your code written in the wrong place.