BT's headcount has been stubbornly resistant to any trimming ever since Gavin Patterson, the expensively coiffured former boss, embarked in mid-2018 on a cost-saving plan to cut 13,000 jobs.

The British operator had exactly 105,787 full-time workers at the end of March 2018, according to its statements. Two years later, despite ups and downs in different divisions, there were 105,344.

Fast forward six months and BT is nearly 3,600 employees lighter after a frenzy of cuts under Philip Jansen, Patterson's successor in the top job.

At the end of September, some 101,752 people in full-time work remained on the payroll. Staff numbers are down 3.5% in just half a year.

The update comes six months after BT promised "no job losses related to the coronavirus crisis for the foreseeable future."

In a press release entitled "BT  standing by the country; standing by our people," the company made a show of solidarity with the common man.

Pay increases were promised for the proles but frozen for the managers. Jansen said he would donate his salary to the health service and charities "for at least the next six months."

BT CEO Philip Jansen does a poor job of concealing his toy car from view during this morning's results call.

Of course, BT will argue that cuts were not linked to COVID-19 and planned before the outbreak. That cannot hide the fact that its most aggressive round of layoffs in years has coincided with the pandemic and a slump in form.

Six-month revenues dropped 8%, to about £10.6 billion (US$13.7 billion), compared with the year-earlier half. That was "primarily due to the impact of COVID-19," said BT.

Reaching this destination is expected to cost about £1.3 billion ($1.7 billion) over the five-year period. BT reported operating costs of £19.6 billion ($25.4 billion) last year, which implies a 10% savings target.

It has retired eight of 25 legacy broadband products and expects to have ditched most of them by the end of the year. It has standardized and automated processes, cut spending with some suppliers and "rephased" marketing activity. COVID-19 conveniently brought an end to most business travel.

A closer look at employee numbers shows that net reductions happened at every unit.

Global, the long-suffering IT services part of the group, took the heaviest blow, losing 1,863 full-time workers or more than 11% of the total.

A surprise, perhaps, was that jobs disappeared at the consumer business and within Openreach, the infrastructure unit. Both had previously been on a recruitment drive while other units were cutting back, explaining why overall headcount remained high.

The good news is that BT's profitability is now on the up. Its margin for earnings (before interest, tax, depreciation and amortization) reached 35.6% in the second quarter, from 34% exactly one year earlier.

Shareholders upset by dividend cuts earlier in the year will applaud efforts to reduce costs by shedding staff and automating processes.

Yet a comparison with other big European operators is unflattering. Even if BT managed to generate the same revenues this year as in 2019, it would make annual sales of just $290,000 per employee with its current workforce.

Last year, the equivalent figure at Vodafone Group, which operates networks across Europe and in some lower-cost markets, was $552,000. At Germany's Deutsche Telekom, it was $447,000, while France's Orange made $337,000. Telecom Italia, perhaps unfairly perceived as an efficiency laggard, generated $382,000. 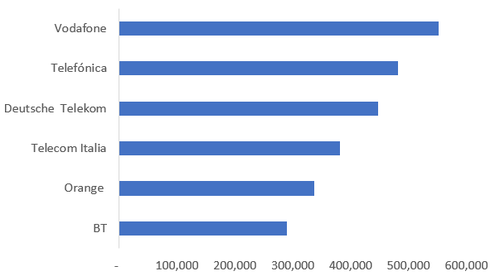 To be at roughly the same level as Orange, BT would need to generate 2019 revenues with a workforce of about 87,000 full-time employees  nearly 15,000 fewer than it had in September.

There is certainly no indication that BT is using other European service providers as an efficiency benchmark. The question is whether shrewd investors have an eye on their metrics and are raising questions about it with Jansen.

BT needs to be careful. In previous years, it was criticized for outsourcing customer care to lower-cost markets. Feedback has improved since jobs were returned to the UK, although automation might now be a threat to these roles.

Openreach, meanwhile, has bulked up staff-wise to support the rollout of fiber-optic networks. That is currently proceeding fast, but any future slippage might affect competitiveness: infrastructure rivalry in the UK is growing.