For companies in the business of connecting people, AT&T, Verizon and T-Mobile often don't seem terribly interested in the details of actually doing that. At times, being a customer of either one of these three giants can be more frustrating than it should be, given all the money they extract for basic service.

The most recent example of this disinterest is the collapse of the Cross Carrier Messaging Initiative (CCMI) joint venture the companies announced in 2019. The goal of the effort was laudable: launching Rich Communications Services (RCS) messaging services. Such services are handy because they allow message senders to see whether their recipients actually received the message, among other functions.

But apparently, it was too hard to pull off. "The owners of the Cross Carrier Messaging Initiative decided to end the joint venture effort," Verizon told me. Verizon's withdrawal may have come as a surprise to the other carriers and their vendor; prior to Verizon's statement, those companies generally told me that "everything is fine, there's nothing to see here." (After this article was published, Verizon's Ronan Dunne clarified to me that another, unnamed carrier was the first to pull out of the CCMI.)

There are plenty of reasons why the CCMI failed that have nothing to do with AT&T, T-Mobile and Verizon. Nonetheless, their inability to update a core part of their customers' experience  text messaging  does not reflect well on them.

The demise of the CCMI is not an isolated incident. Take robocalls for example. I think I can speak for phone users everywhere when I say that they are annoying. They can also cause major problems for Americans who might not be able to quickly identify them, such as the elderly. Yet operators like Verizon and T-Mobile only last month managed to complete the implementation of STIR/SHAKEN anti-robocall protocols across all major carriers. That's roughly six years after the FCC's chairman called on the operators to start blocking robocalls "now." (Though, to be fair, the full STIR/SHAKEN protocols weren't ready to go until last year.)

And just this week, the FCC asked carriers to report on the status of their robocall efforts, including how they're offering call-blocking tools to consumers. This is because it's not clear how operators are implementing the technology, even to the nation's telecom regulators.

But voice calling and text messaging are legacy technologies. When it comes to flashy new technologies like 5G, operators ought to be completely up to speed, right?

Well, let's take T-Mobile, widely regarded as the operator to beat in 5G. In 2019, T-Mobile boasted that "5G speed will be up to 10x faster, compared to LTE." But when it first launched its 5G network on its lowband 600MHz spectrum, speeds were only 20% faster than its LTE network. Then, after T-Mobile closed its acquisition of Sprint's 2.5GHz midband spectrum, it quickly began offering 5G speeds up to 1Gbit/s. The operator even debuted a new 5G lexicon for its offerings: "5G Ultra Capacity" refers to its speedy 2.5GHz network, while "Extended Range 5G" refers to its slower 600MHz network.

So it would stand to reason that customers might want to see which flavor of T-Mobile 5G they can access, right? A quick check of T-Mobile's coverage map reveals none of these details. The operator only offers a generic "5G" coverage layer that does not provide details about whether it's 600MHz or 2.5GHz. One is slightly faster than LTE while the other provides average speeds of 300Mbit/s. Prospective T-Mobile customers are left in the dark.

Pick any color, as long as it's magenta 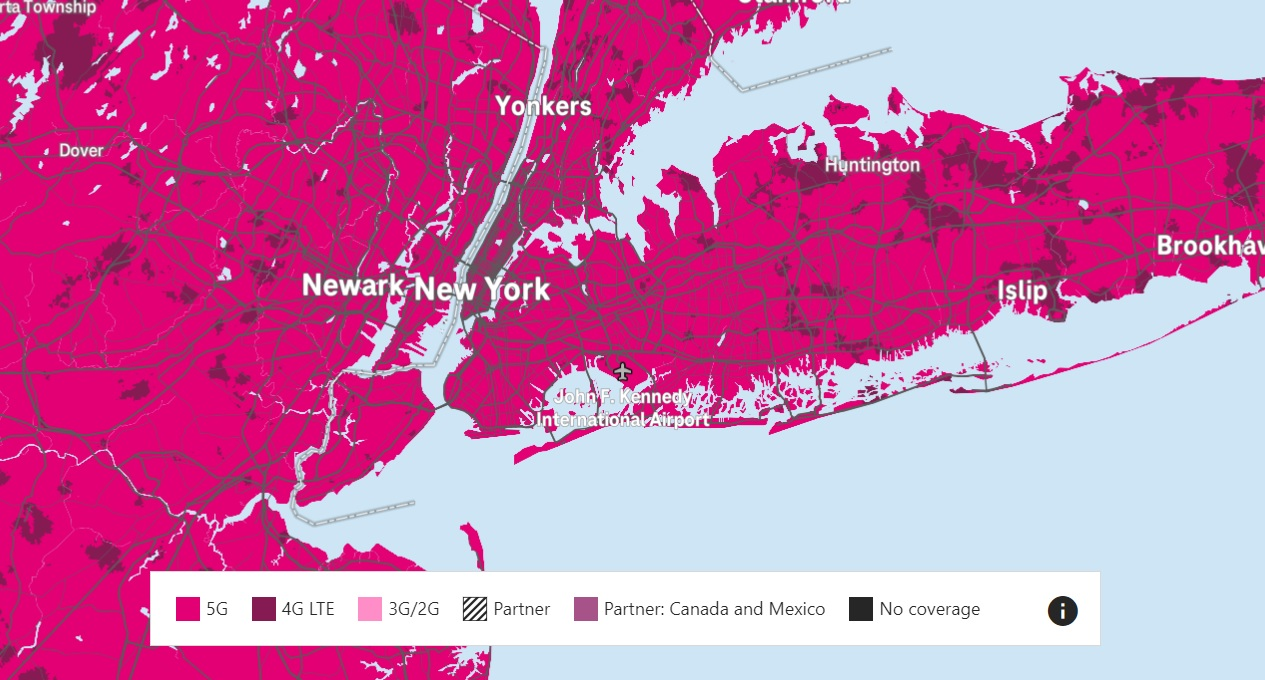 Click here for a larger version of this useless map. Source: T-Mobile

And this is from the operator that conducted an extensive advertising campaign in 2019 against Verizon called "verHIDEzon" that criticized Verizon for its lack of detailed 5G coverage maps.

But T-Mobile isn't the only operator seemingly content to hide behind 5G obfuscation. AT&T has debuted no fewer than three different 5G brands  5G+, 5Ge and 5G  yet it does not offer any details to prospective customers about how it might charge for those offerings. The operator's pricing plans mention only "5G" and do not specify whether that means 5G+, 5Ge or 5G, or all three.

In 5G, Verizon is reserving its faster "Ultra Wideband" technology only for its expensive unlimited plans. Customers on its cheapest Start Unlimited plan can either pay $10 extra for 5G specifically, or they can spend that same $10 to upgrade to a more expensive unlimited plan that offers 5G as well as other goodies, such as more mobile hotspot data. Why the two different upgrade options? "We always like to give customers choices," explained a Verizon spokesperson.

But what that really means is that customers are simply left to fend for themselves. They're left to pick from among a dizzying number of pricing options, all promising "unlimited" data, but all limiting that data in various ways. Customers are left to figure out why messages from iPhones to Android phones won't show delivery receipts. They're left to discover why they're still receiving robocalls, and what they might need to do to block them. They're left to uncover what kind of 5G they can get and whether it's any different from 4G.

AT&T, Verizon and T-Mobile continue to be very interested in outdoing one another in their 5G pricing schemes and big, new network claims, but when it comes to pleasing customers, the tired telco legacy lives on.