AT&T has cemented its reputation as the telecom world's most enthusiastic cutter of jobs.

Roll the clock back to late 2017 and the giant US firm  including the Time Warner business it had agreed to buy  employed around 280,000 people.

In the space of just four years, the number has dropped by an astonishing 77,400, roughly equivalent to the entire workforce of T-Mobile US, AT&T's most aggressive rival. More than 28,000 of those jobs disappeared in the last year alone, according to the earnings report that came out this week.

The company's explanation for thousands of recent cuts is the divestment of video assets that no longer hold strategic value for the core business.

Between July and September, when it sloughed off 12,000 employees, AT&T parked its DirecTV unit in a separate legal entity, part owned by TPG, a private equity firm.

Another 12,240 jobs vanished in the final quarter of 2021 as AT&T sold Vrio  another TV unit serving Latin America and the Caribbean  to investment company Grupo Werthein.

AT&T resists use of the word "cuts" to describe this shrinkage, which transfers staff out of the main business without necessarily scrapping roles.

But the net effect has been to slash employee numbers at AT&T to even lower levels, and the overall reduction since 2017 includes many thousands of layoffs. Jobs have been culled in units including retail and field operations as John Stankey, AT&T's boss, continues his ruthless pursuit of $6 billion in cost savings.

The man who succeeded Randall Stephenson as CEO in mid-2020 is now more than halfway to that $6 billion target, and confident he will cross the two-thirds mark by the end of this year.

His mission has been aided partly by the growing consumer appetite for online shopping amid the COVID-19 pandemic. By October last year, AT&T had realized about $500 million in savings from what Stankey described as "the rationalization of our retail store footprint."

At the same time, telecom operators have been able to automate processes and dispense with manual labor as their networks become cloudier and more software-based.

AT&T, notably, already clams to have "virtualized" about three quarters of its network functions. It has also struck a game-changing deal with Microsoft Azure to run its entire 5G core network from the public cloud.

"Microsoft will be responsible for hosting all of AT&T's network cloud development and deployment," said Will Townsend, an analyst with Moor Insights and Strategy, in a Forbes article last year. The software giant will also "integrate AT&T personnel," he wrote. 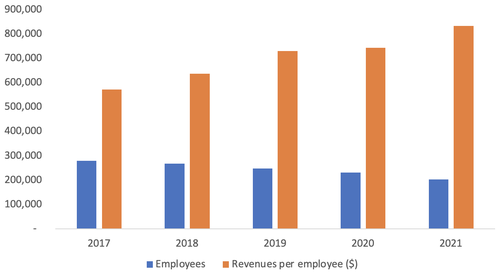 AT&T's streamlining of field operations had brought about $1 billion in savings by the time Stankey provided his October update.

Costs have fallen as the company has relied on customers rather than technicians to install equipment, a move that was probably easier to sell with a serious virus in circulation. Smart IT systems that can anticipate and deal with problems have reduced the need for truck rolls.

In the meantime, some of the company's older technology platforms are due for retirement. AT&T plans to close its entire 3G network next month and incurred about $130 million in so-called "shutdown costs" last quarter.

Those expenses are likely to peak in the current three-month period at about $250 million, executives reckon. But AT&T's mobile business also registered a $300 million year-on-year increase in earnings (before income, tax, depreciation and amortization) last quarter, thanks partly to efficiency measures.

The industry has not reached the point where networks can build and operate themselves, but the outlook for employees is not rosy.

AT&T's headcount will probably witness another big drop when the operator finally divests WarnerMedia, the rebranded Time Warner business it bought for $85 billion in one of the sector's worst deals of all time. Stankey expects to complete the merger of that unit with Discovery, a TV business, between April and June.

Staff there must feel something like kids in foster care, tossed around between different families. Even if most of them cling onto their jobs, other AT&T heads seem bound to roll with so much of the cost-savings program still unfinished.

Although money has so far been "reinvested into operations supporting our growth" (Stankey's words on this week's earnings call), AT&T is also guiding for profitability improvements starting late this year.

One metric has already risen sharply. Back in 2017, AT&T made about $575,000 per employee in annual revenues. After the recent fourth-quarter update, it now generates more than $830,000.

Total company sales have changed little in the past few years, despite all AT&T's shapeshifting efforts to become a media business and marketing hype about 5G. But its rapidly shrinking workforce has made AT&T look more productive than ever.