A network operator's view of 6G

BIG 5G EVENT, DENVER  Executives from some of the top operators in the US have mostly avoided talking publicly about 6G.

"I really don't know what the hell 6G is," Verizon's Kyle Malady told Light Reading late last year. "We just put 5G in. And I think there's a lot of development still to come on that one."

"Why do we need 6G?" asked Karri Kuoppamaki, VP of technology development and strategy for T-Mobile US, in comments made late last year. "I believe 5G has a long and bright future ahead of it."

However, much has changed in the intervening months. Operator executives and regulatory officials around the world have been increasingly discussing 6G mobile technology and how they might implement it.

In the US, the Next G Alliance is now driving a comprehensive approach to 6G that covers not only the technology but also the regulatory, academic and social impact. The organization, backed by the Alliance for Telecommunications Industry Solutions (ATIS), counts members ranging from AT&T to Apple to Verizon.

Trapped in a 5G investment

However, many of those big companies are still betting heavily on 5G, both now and for the future. For example, Verizon plans to spend roughly $10 billion over the next few years to add C-band midband spectrum to its 5G network  and it undoubtedly hopes to recoup that investment by selling speedy 5G services. Apple, for its part, just started selling its first 5G device a year ago.

As a result, companies like Verizon may be somewhat unwilling to speak at length about the technological generation after 5G, particularly considering it probably won't be widely commercialized until 2030.

And that's what makes Mike Irizarry of UScellular so noteworthy. He's in the process of rolling out 5G across the regional US operator's network, but has become an outspoken proponent of 6G. This week, he served as the keynote speaker for ATIS' Next G Alliance 6G conference here at the Big 5G Event.

"6G will be about connecting pretty much anything you can imagine to the Internet," Irizarry, UScellular's CTO, said during his virtual keynote appearance Tuesday. "It's really an exciting time to look forward to." 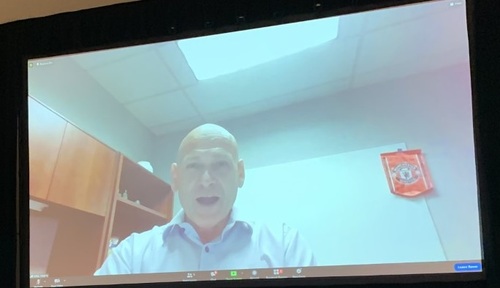 Irizarry explained that the pandemic has heightened the importance of "digitalization." He said that 6G would support all kinds of new services, including those designed to cross the digital divide as well as those designed to create "digital twins" of real-world environments.

"It's just at a whole new level," he said of 6G technology, explaining that it could support real-time holographic 3D imaging and other high-tech, sci-fi-type services.

Interestingly, Irizarry said that today's 5G technologies cannot support the "full potential" of wireless services in industries ranging from healthcare to manufacturing. For example, he said full-blown, Level 5 autonomous driving, or other applications such as remote surgery, are not possible on current 5G networks. "5G can't do that," he said.

The difference between 5G and 6G, Irizarry explained, is the application of artificial intelligence (AI) and machine learning (ML) technologies. Such technologies will allow 6G operators to create seamless experiences across all types of networks, including networks running in licensed and unlicensed spectrum bands, as well as systems utilizing satellites and High-Altitude Platforms (HAPs) like drones and blimps. He said AI and ML would be essential for operators looking to manage communications across lowband, midband, millimeter wave (mmWave) and terahertz spectrum bands.

"All those technologies need to work together seamlessly," Irizarry said, noting that Wi-Fi is still not fully integrated into 5G. "The level of complexity [in 6G] is just significantly higher than what we've seen with other technologies."

"If I had to say what the killer app is [for 6G], it would be intelligence," he added, noting that insights into network operations would be critical for operators as well as enterprise customers like hospitals.

The American flavor of 6G

But he added: "We all need to come together to make sure there is a global standard."

Irizarry also said that it's important for the US to maintain a leadership position in the development of 6G, just as it has in previous generations of wireless technology. That, he said, is partly why ATIS developed the Next G Alliance, so that academics, regulatory officials and industry executives could all work together on the technology.

"If we don't get moving, we're going to fall behind" in terms of 6G, he said.

"I feel it's important for us to have that role," he said of a leading US position in 6G. "That's important to me as an American citizen."