Vodafone bosses boost their pay as jobs are culled

The notion that corporate fat cats are growing more obese while the rank and file suffer is one companies were eager to squash even before this pandemic. After the publication of its latest annual report this week, Vodafone will struggle.

It shows the UK-based operator has now cut more than one in five jobs across Italy, Spain and its domestic market in the last four years, with headcount in those countries down more than a tenth in the last fiscal year alone.

In the meantime, rewards for the head honchos have grown even more extravagant. CEO Nick Read collected about £3.7 million ($4.6 million) in total remuneration for the year that ended in March 2020, while CFO Margherita Della Valle pocketed about £1.8 million ($2.3 million).

Both executives recently said they would give up one quarter of their salaries over the next three months and donate this to charitable causes. Unfortunately, this public display of solidarity with the ordinary person is undermined by the revelation that Read's pay packet grew 25% last year, while Della Valle's was up 56%.

Read did take a 9% reduction in the salary Vodafone sets for the CEO, the operator points out. His salary increased only because for about four months of the previous fiscal year he was still CFO. Della Valle, similarly, spent part of that year in a less senior role with a lower salary.

What's more, Vodafone's remuneration committee has not awarded a salary increase to the CEO for some time. A spokesperson for the operator says: "The committee has been reducing the potential payouts over a number of years and our new remuneration policy for 2020 and the next three years reduces remuneration further."

Executive rewards at Vodafone, it is fair to say, are certainly not in the same category as the egregious payouts awarded to some US telco bosses slashing jobs, such as the heads of telco giants AT&T and Verizon.

Nevertheless, the increase in remuneration  promotions notwithstanding  came as a cull of the Vodafone workforce continued in key markets.

During the 2016 fiscal year, Vodafone employed 111,556 people on average across its various international operations. By 2020, the number was down to just 95,219, according to the latest financial statements. 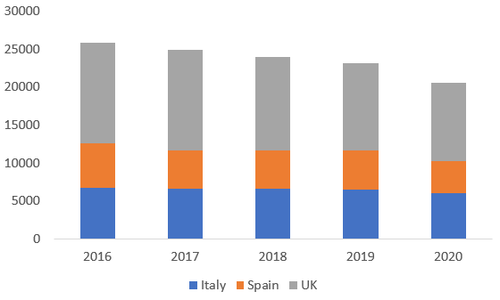 In fairness, thousands of jobs have disappeared from Vodafone's total because of divestment activity. Last year, that included the discontinuation of Vodafone's India business, following its merger with Idea Cellular, wiping exactly 4,554 employees off the books of Vodafone Group. Something similar had previously happened when Vodafone merged its Dutch business with that of Liberty Global.

At the same time, Vodafone scooped up a good number of people with last year's takeover of several Liberty Global assets in Europe, including the cable company's large German subsidiary. While it is unclear exactly how many staff were transferred, filings with the US Securities and Exchange Commission show that Liberty Global shed about 6,400 jobs between 2018 and 2019, finishing last year with 20,200 in total.

That takeover probably explains the growth in European staff numbers last year. Germany acquired another 1,785 employees, bringing its total to 15,199. Ignoring the major markets of Italy, Spain and the UK, Vodafone's other European businesses gained 2,233, employing 14,646 on average during the last fiscal year.

But adding those increases together leaves nearly 2,400 Liberty Global employees unaccounted for. While the deal was not consummated until July 2019, some of those workers could be casualties of the efficiency drive that accompanies any merger activity.

Of course, the real carnage occurred in Italy, Spain and the UK, where enthusiasm for online shopping, a chatbot called TOBi and the automation of some technical jobs queued up to savage Vodafone staff.

The outlook is bleak. Reporting its financial results in May, Vodafone said it was targeting another 1 billion ($1.12 billion) in savings over the next three years, having slashed operating costs by 800 million ($894 million) in the last two. In Europe, this implies a cost reduction of 20% over this five-year period, with customer care and distribution in line for the biggest chops.

For all the charitable donations by Read and Della Valle, the pandemic is actually a glorious opportunity for them to add to the unemployment figures. Too scared of coronavirus to interact with shop assistants, consumers now require little encouragement to buy online. TOBi is, potentially, a long-term solution to the problem of costly, overcrowded and coronavirus-ridden customer care centers.

As for the equally grubby network operating centers (NOCs), the prognosis was delivered at a London press briefing in late 2019. "We have been focusing heavily on moving to zero-touch NOCs, which means automating what we have in the NOCs," said Scott Petty, Vodafone UK's chief technology officer.

The operator has already cut staff numbers in the NOCs from about 1,500 to the "low-single-digit hundreds," Petty revealed. "Five to seven years from now, there will be a very small number of people that run the NOC infrastructure."

And yet Vodafone's share price has hardly seen the revival under Read that would justify a huge pay increase last year. When he took over the job in October 2018, it was £147.82 on the London Stock Exchange. At the start of this year, when coronavirus was just a Chinese problem that most people had never heard of, it was £149.30.

In the preceding two years, a period in which Read served as CFO, its value declined by a third. Setbacks in India and underperformance in major European markets were among the problems that weighed on the UK firm.

Vodafone has prior form, awarding Vittorio Colao, Read's predecessor, a £1.7 million ($1.9 million) increase in overall compensation for his final full year as boss, to £8 million ($10 million), amid his bludgeoning of the company's stock. By that measure, Read comes cheap.

The conversation about executive rewards amid downsizing is unlikely to fade during this pandemic, with the worst extremes in the US. John Stankey, the chief operating officer and future CEO of AT&T, collected nearly $22.5 million in compensation last year, about $6 million more than in 2018. Over that same period, about 20,400 jobs were cut, nearly 8% of the total.

Companies may have a hard time justifying this sort of treatment for the top brass in future. Job cuts in the aftermath of a pandemic, and the deep recession it inevitably causes, risk turning company bosses into the greedy villains of the moment.

UPDATE: This article has been amended since first publication to provide additional international context and include feedback and comments from Vodafone about remuneration for Read and Della Valle.