Verizon's Visible brand announced Thursday that it would use eSIM technology to allow prospective customers to test out its service for two weeks for free.

The company said that potential customers with eSIM-compatible phones like the iPhone 13 can visit visible.com/free-trial to sign up for the offer. They'll receive a new phone number that they can use for the trial. Participants will be able to keep their existing number active during the trial. At the end of the trial, they can choose to switch to Visible by subscribing with either their new number or their existing number.

"We've heard from a lot of potential consumers that Visible seems too good to be true. So we're asking consumers to put us to the test," the company said in a statement. "Now, users can see how Visible's service performs head-to-head with their current carrier. The move also indicates our ongoing commitment to eSIM."

Visible has been supporting eSIM technology for more than a year for customer activations. Visible confirmed to Light Reading that more than 20% of its customer gross net additions already use eSIM technology, and that the company plans to increase that figure to 100% "over time." 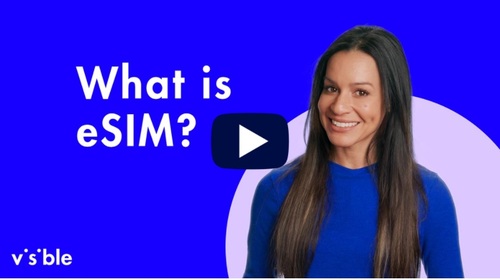 Visible offers a detailed explanation of eSIM on its website.
(Source: Visible)

"As a digital-only carrier, we are leaning into technology that makes it easier to switch, and something that digital natives will adopt quickly  and that's eSIM," the company wrote in response to questions from Light Reading. "For us, the free trial is the next evolution of eSIM."

A new strategy from Verizon

The offering from Visible represents an important step forward in the eSIM market because Verizon is Visible's parent company. Roughly five years ago, Verizon's management team decided to enter the prepaid, bring-your-own-device market with a new stealth brand that didn't carry the legacy trappings of Verizon's big red logo. Indeed, company officials were so keen to highlight the differences between Visible and Verizon that they based Visible in Denver, far away from Verizon's headquarters in Basking Ridge, New Jersey.

In launching its new brand, Verizon's management also decided to use cutting-edge, cloud-based networking technologies. The result, according to company officials, is a "digital-native," app-based company that does not have any physical retail operation and is squarely targeted at the millennial and Gen Z crowd.

According to Verizon's new consumer chief, Manon Brouillette, Visible will sit alongside Verizon's other new prepaid brands like TracFone and Straight Talk.

Thus, Visible's new eSIM offer essentially represents a further dip of the toe in the water by Verizon into eSIM technology. And that's noteworthy considering the Department of Justice around 2017 launched an investigation into Verizon and other US carriers for potentially blocking the use of eSIM technology in the US market.

According to the DoJ's investigation, AT&T and Verizon moved within the GSMA trade association to block the implementation of eSIM in the US market "to benefit the incumbent operator members by reducing their competitive pressures." The DoJ wrapped up its investigation in 2019 following new rules within the GSMA designed to prevent operators from blocking technologies like eSIM.

Verizon's Visible isn't the only company now testing out new eSIM services. US Mobile, an MVNO that rides on top of the networks of T-Mobile and Verizon, recently announced the commercial availability of eSIM technology for its service. And T-Mobile last year launched a similar "test drive" iOS application using eSIM that allows customers to use its network for free for 30 days. A T-Mobile representative earlier this year described the offering as a "pilot program" and provided no further details. T-Mobile's app though is still available in the Apple App Store, and was updated roughly two months ago "with bug fixes and performance improvements."