Since 2012, the workforce across seven telecom incumbents in Western Europe has shrunk by 15%, or nearly 105,000 jobs, as companies have sold assets, outsourced operations and taken advantage of automation and other efficiency-boosting measures.

The figures also show the recent pace of reductions picked up last year after a slowdown in 2018. That year, staff numbers were down about 6,400 across the seven companies. In 2019, nearly 18,500 jobs disappeared. 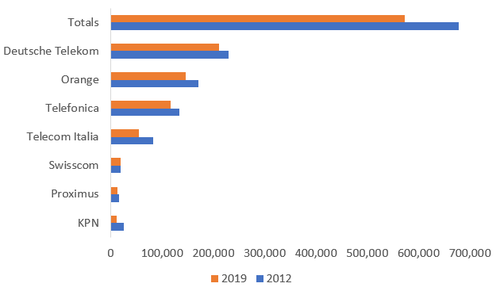 While thousands of people employed by these operators work in the Americas, Africa and the Middle East, the axe last year fell mainly on staff in Europe, the data indicates. Telecom Italia, the latest company to report numbers when it published earnings this week, cut 2,739 jobs in Italy, about 6% of the domestic total.

In Spain, Telefónica finished 2019 with 22,869 employees, nearly 10% fewer than a year earlier. Deutsche Telekom slashed more than 5,600 jobs at its Germany and Europe operating segments, more than 5% of their total.

After this week's update by Telecom Italia, the UK's BT and Vodafone, both of which report to an end-March fiscal year, are the only major Western European companies with a telco background that have yet to publish annual figures. Their ongoing push for cost savings means both are likely to report a fall in staff numbers.

Although divestment activity and outsourcing largely explain previous rounds of job cuts, the latest data could point to the recent impact of automation in the telecom sector. Operators including Deutsche Telekom, Telecom Italia and Telefónica are investing in software systems that can operate networks with far less human involvement than previously required. They have also pumped funds into artificial intelligence for their customer-facing departments, including "chatbots" that can be used instead of employees to handle customer queries.

In the UK, Vodafone has blamed hundreds of recent layoffs on the automation of its network operations centers (NOCs), warning of further cuts in future. "Five to seven years from now, there will be a very small number of people who run the NOC infrastructure," said Scott Petty, Vodafone UK's chief technology officer, during a press briefing in late 2019. "The way we run networks is fundamentally changing."

Telenor, the Norwegian incumbent, is also hacking into headcount as it automates IT and back-office systems. Earlier this month, it announced plans to slash 15% of jobs by 2022, having already cut staff numbers heavily in the last few years.

Operators see automation and other headcount-reducing measures as a way to protect or boost profitability while they struggle to increase sales.

For investors, the good news is that many companies have been able to slash jobs without an upset to their sales performance, supporting the view that technology and related changes are making some roles unnecessary. 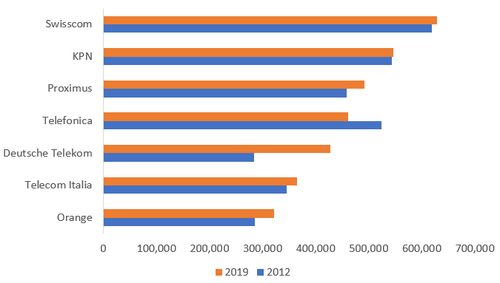 Last year, six of the European operators generated more in sales per individual employee than they did in 2012, although some companies have seen a far more substantial increase in this efficiency measure than others. The most successful is Deutsche Telekom, which has been fueled by market-share gains and a revenue surge in the US.

All operators managed an increase in revenues per employee between 2018 and 2019 bar Telecom Italia, which has been losing Italian mobile customers to Iliad, an aggressive French company that launched a low-cost Italian service in May 2018.

With the growing use of automation, investors are likely to pay even greater attention in future to revenues per employee as a measure of a company's performance and productivity. Firms inside and outside the telecom sector are increasingly being assessed alongside Internet companies that already run highly automated operations. 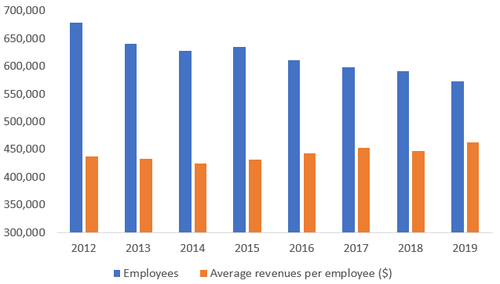 Google made per-employee revenues of nearly $1.4 million last year, while Facebook managed $1.6 million. Swisscom, the most efficient European operator on the basis of this metric, currently generates about $629,000 in annual sales per employee (using today's exchange rate).

Major telecom operators in the US market have outperformed their European counterparts after slashing tens of thousands of jobs in the last couple of years. AT&T, which made per-employee revenues of $731,000 last year, has cut about 32,000 jobs since 2017, while Verizon  with sales per employee of about $977,000  has axed about 20,400 roles.