Few operators have had the same penchant for cost cutting as Norway's Telenor, which has nearly halved its workforce in the last five years by selling off parts of its business and emptying others of people.

The effort goes on. Operating costs, ignoring takeover activity, fell 12% year-on-year in the recently finished second quarter, as jobs were culled in Malaysia, Pakistan, Norway and Thailand. As coronavirus chewed into sales, profits received a welcome boost from the latest "efficiency" measures.

For perhaps the first time, figures just out show the full-quarter effect of COVID-19 on a major European service provider with international operations. With flights grounded and prepaid customers in Asia spending less, sales in the second quarter took a 4.2% hit, on a like-for-like basis, when compared with the same period of 2019.

That decline was obscured in the reported numbers by Telenor's takeover of DNA, a Finnish operator, in August last year. With that move, revenues grew 15%, to about 30.9 billion Norwegian kroner (US$3.3 billion). Both propelled and restrained by various factors  including currency movements (positive), proceeds from divestments (positive), depreciation costs (negative) and a fine for market abuse (negative)  net profit soared 55%, to about NOK4.4 billion ($470 million).

Importantly, though, Telenor's margin for earnings before interest, tax, depreciation and amortization (EBITDA) rose 1.7 percentage points, to 46.4%, and must now rank as one of the highest among Tier 1 carriers in Europe. Back in the same period of 2015, when Telenor was a very different-looking entity, the equivalent figure was just 35%. An increase of more than 11 percentage points in five years shows where the management focus has been. 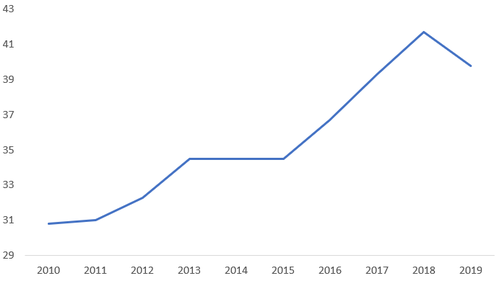 In a worrying development for remaining employees, coronavirus is now sharpening that focus on cutbacks. Plans for the automation of manual tasks have been "accelerated," said Sigve Brekke, Telenor's CEO, in his statement about the latest numbers. Sales activities are being shifted online, he said. All this comes even though telecom has clearly not been hurt as badly by coronavirus as other sectors. With profits up, Telenor risks criticism it is using the pandemic to justify a more aggressive program of cuts than it would otherwise attempt.

The latest plans were outlined in March, shortly after coronavirus had prompted the cancellation of this year's Mobile World Congress. During an investor presentation, Telenor revealed that about 15% of jobs would disappear by 2022. Unless there is a recruitment drive in digital or growth areas, this means the Norwegian operator could be left with just 17,000 employees.

Headcount has already fallen dramatically at the company in the last few years. In 2015, when it still had a large Indian operation and various subsidiaries in central and eastern Europe, Telenor employed about 38,000 people worldwide. Last year, after it had sold assets and taken its first steps on the path to what Brekke calls "zero touch operations," just 20,044 were left.

The shrinkage and Indian exit have given a massive boost to revenues per employee, partly explaining the similar surge in Telenor's EBITDA margin. In 2015, Telenor made roughly $350,000 for each international employee. Last year, it generated nearly $590,000, an increase of nearly 69%. No other major operator tracked on this measure by Light Reading has reported such a huge gain in percentage terms. If Telenor can maintain revenues at the 2019 level while delivering on its cost-saving plan, its revenues per employee would be $720,000 (at today's exchange rate) in 2022.

Revenues this year, however, are expected to fall at a "low single digit" rate. Telenor will undoubtedly hope for an improvement in 2021, when everyone hopes the coronavirus pandemic will end. In the meantime, though, it is cutting not only operating costs but also capital expenditure. Last year, Telenor spent 16% of revenues on capex. This year it plans to invest just 13%. So far this year, it has spent about NOK7 billion ($750 million) across all operations, 14% less than it managed in 2019.

The worry for investors is that cuts hurt the long-term business outlook. Among other things, Telenor is currently building out its Norwegian 5G network, and shifting from China's Huawei to Sweden's Ericsson as it does so. Despite its capex decline, operators and government authorities in the UK  where Huawei was this week banned from selling 5G network products beyond 2020  reckon this type of switch will lead to additional costs. Telenor executives have insisted they are not sacrificing any future opportunities with the latest moves, however.

Those could set a troubling precedent for other service providers to follow. Profit-seeking investors would rather see gadgets sold online than in costly premises. They would naturally prefer a network operations center that runs itself, instead of one managed by salaried employees. In a world of social distancing and hygiene-obsessed regulators, the case for the worker has become a lot harder to defend.