Job cuts at AT&T and Verizon soared to their highest level in at least seven years in 2019, when the two US phone giants reduced their combined workforce by nearly 30,000 roles, or more than 7% of the total in 2018, according to publicly available data analyzed by Light Reading.

Quarterly figures published by the operators show that AT&T slashed 20,420 jobs, almost 8% of the total, while Verizon cut 9,500 roles, nearly 7% of its overall workforce at the end of 2018.

The information on jobs became available several weeks ago when both operators released earnings reports for 2019. Still, it now shows the US companies are pursuing an even more aggressive program of headcount reduction than their European counterparts, which published their own figures more recently.

Germany's Deutsche Telekom last week revealed that about 5,000 jobs at the organization were cut last year, roughly 2% of its end-2018 workforce. Headcount at Spain's Telefónica fell by 4,500, just less than 4% of its 2018 total.

The cuts are happening amid concern about the impact of automation and new digital technologies on staff numbers. In the UK, Vodafone recently attributed hundreds of layoffs to the automation of its network operations centers (NOCs) and warned of further cuts in future. "Five to seven years from now, there will be a very small number of people who run the NOC infrastructure," said Scott Petty, Vodafone UK's chief technology officer. "The way we run networks is fundamentally changing." 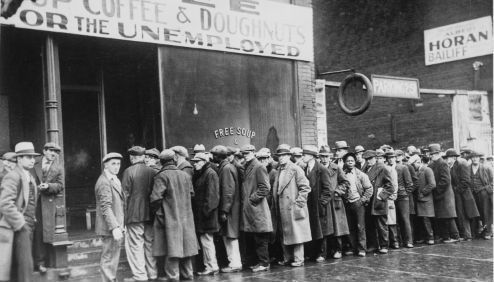 Not a live webcam outside of AT&T.

In the meantime, customers are increasingly opting to buy smartphones and other services online, giving operators less reason to invest in physical stores and the employees who run them. Automated voice platforms, including "chatbots" based on artificial intelligence, are beginning to replace staff in some customer service departments.

Cuts at AT&T follow the operator's $85 billion takeover of media giant Time Warner in 2018. Across the two organizations, the combined workforce would have been roughly 280,000 employees at the end of 2017, according to filings with the Securities and Exchange Commission. Since then, it has fallen to just 247,800, meaning about 12% of jobs have disappeared.

Asked which departments were affected and whether automation was mainly responsible, an AT&T spokesperson said by email: "Like any business, we must align our workforce with the needs of our customers and the business. To the extent possible, we manage staff adjustments through retirements and voluntary departures."

"It's important to note that many of our union-represented employees have a job offer guarantee that ensures they'll be offered another job with the company if their current position is eliminated," added the spokesperson. "We're hiring where we're seeing increased customer demand for products and services and we're currently hiring for more than 4,500 jobs across the US."

Shareholder pressure
AT&T has come under shareholder pressure to improve its performance. Despite a 22% increase in its stock price since this time last year, it has been losing market share to aggressive rival T-Mobile US, which could become an even stronger force if it completes a merger with Sprint, the other member of the "big four." Hopes for that deal are riding high after the merger recently cleared some legislative hurdles.

Cuts at Verizon are not surprising after the operator warned in December 2018 that around 10,400 employees would depart in 2019 under a voluntary separation program. Last year's layoffs, however, follow the elimination of nearly 11,000 jobs in 2018 and around 5,500 in 2017 as the company has restructured its business units and sold infrastructure assets. More than a quarter of jobs at Verizon have disappeared since 2012, according to historical data compiled by Light Reading.

The company did not respond when approached by Light Reading for a comment on the latest round of redundancies.

Revenues per employee in 2019 ($, at today's exchange rates) 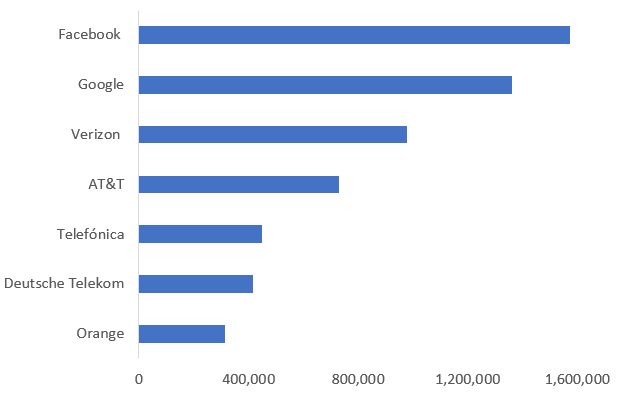 In January, AT&T's program received a sharp rebuke from Communications Workers of America (CWA), a trade union group, which reckons nearly 39,000 jobs have vanished since the US Tax Cuts and Jobs Act went into effect in 2018. The CWA adjusted its figures to exclude acquisitions made by AT&T.

"AT&T has continued to cater to the demands of controversial vulture hedge fund Elliott Management, which purchased a small stake in AT&T in September 2019," said the CWA. "Elliott is pushing AT&T to extract profits from the company by eliminating jobs, outsourcing work and divesting critical assets."

The program of layoffs at AT&T and Verizon has buoyed efficiency, with per-employee revenues growing at a sharper rate than headline sales in the last few years. Although both operators lag the highly automated web giants on this metric, they each generate far more in sales per employee than any of the big European operators. 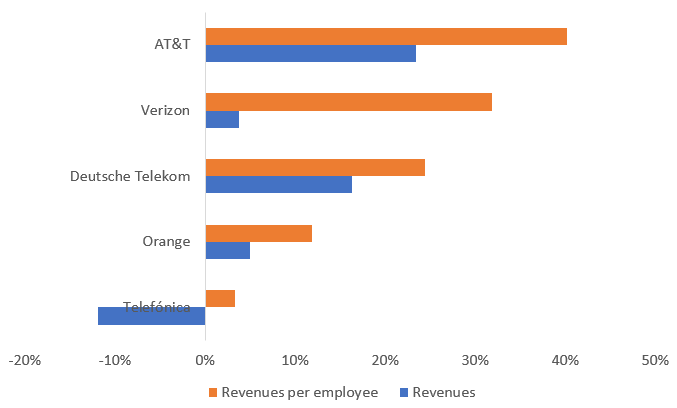 While service providers are struggling to boost revenues, the headcount reductions at AT&T and Verizon have not been triggered by any recent decline in sales. Verizon made $131.9 billion in revenues last year, comparable to its performance back in 2015, while AT&T's sales grew from $146.8 billion then to $181.2 billion in 2019, thanks partly to merger activity.

Both operators, however, are under pressure to increase their investments in the rollout of new 5G networks. Policymakers are concerned the US could fall behind China in 5G, losing an economic advantage if the technology turns out to be as important as proponents claim. Yet many industry experts doubt 5G represents a major growth opportunity for telcos, noting their earlier failure to boost revenues when upgrading to new generations of mobile technology.

Besides adding to the pressure on AT&T and Verizon, a merger between T-Mobile and Sprint is a further worry for telecom workers in the US, simply because takeover activity usually results in layoffs as duplicate roles are scrapped. Timotheus Höttges, the CEO of T-Mobile's German owner Deutsche Telekom, has previously insisted the combined company will employ more people than the two operators would if they remained separate, but CWA reckons 30,000 jobs are now at risk.

Employees worried about layoffs may have one reason to feel optimistic: A combined company in 2018 would have looked even more efficient than AT&T and Verizon on the basis of staff numbers, generating more than $1 million in per-employee revenues.

iainmorris 2/27/2020 | 2:08:44 PM
Clarification The story has been tweaked to point out that CWA numbers have been adjusted to exlcude acquisitions made by AT&T. Previously, it said the impact of takeover activity on the workforce had been ignored.
Reply | Post Message | MESSAGES LIST | START A BOARD
EDUCATIONAL RESOURCES