FlixonTV, an OTT-TV service that has been partnered up with embattled video services distributor Omniverse One World Television, has -- at the very least -- quietly changed its name.

Elements of the FlixonTV site are still live at last check, but when one clicks on links within those pages, the user is directed to another site that is operating an OTT-TV service under another brand: Omni Go. 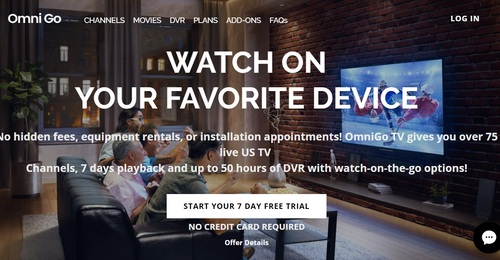 Visitors to the FlixonTV site are now directed to a service called "Omni Go," referenced as a trademark of Omniverse One World Television.

It's not clear yet if that change represents more than a branding adjustment.

The Omni Go website site notes that OmniGo.tv is a trademark of Omniverse One World Television Inc., the company being sued by several major US studios; the studios claim that Omniverse's distribution of pay-TV streaming services violates copyright laws.

Omniverse has strongly argued otherwise, holding that it's on the level, citing a deal with a private cable operator called HovSat Inc. In an earlier interview, Omniverse CEO Jason DeMeo said Hovsat has a 100-year deal with DirecTV that goes back several years. According to court documents, an entity called OmniSat is a joint venture between HovSat and Omniverse.

Omniverse and Flixon have not revealed all of the elements of their business relationship, but an industry source familiar with the companies believes that Flixon has a "master reseller" agreement with Omniverse and could be serving as a go-between with other, separately-branded OTT-TV services that are somehow connected to Omniverse.

Emailed questions about Omni Go to two different addresses for the site's media contact have bounced. Omniverse CEO DeMeo has not returned a call seeking more details about Omni Go. A customer representative contacted me (through a chat window) while I was visiting the Omni Go site. After I identified myself as an editor with Light Reading and requested updated contact info for the media representative, I did ask if there was a connection between Flixon and Omni Go, and the person answered that Omni Go "has taken Flixon over." 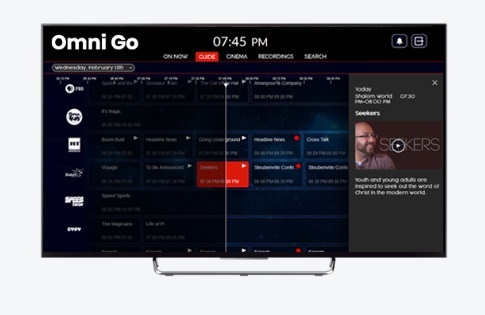 OmniGo.tv and Flixon Media Inc. both list similar postal addresses in Rehoboth Beach, Del. The address (19266 Coastal Hwy Unit 4) is evidently a location for a Parcel Plus outfit in the area.

Omni Go has also set up a Twitter handle , a Facebook page, and a YouTube channel (though no videos have been posted there at last check). The Linked In page on the Omni Go page still takes the user to a page for Flixon Media.

Omni Go's site also markets some add-on features and upgrades, including an "enhanced" cloud DVR with 50 hours of storage for an extra $4.99 per month, and two multi-screen options: three screens for $4.99 per month more, and five screens for $7.99 per month. The baseline Omni Go service allows for only one stream per account.

In another twist, Omni Go TV doesnt require a credit card for the free trial. Similar to an approach undertaken by another OTT-TV service, Philo, consumers can provide a US-based cell phone number to receive a verification code that can be used for the seven-day trial. The trial does not include access to the cloud DVR, replay TV service or access to the full Omni Go movie library.

On the device front, Omni Go supports iOS and Android and three TV-connected device platforms (via casting, not through a native, onboard app): Roku, Apple TV and Amazon Fire TV. It says support for PlayStation and Xbox consoles are coming soon.

We'll provide more updates soon. Next week, we'll have more detail on how Omniverse appears to be mounting its legal defense.

In the meantime, catch up on the Omniverse saga:

Jeff Baumgartner 5/9/2019 | 11:17:05 AM
Flixon-Omniverse Deal Has Ended Flixon announced this week that the partnership it entered into with Omniverse in 2017 has come to an end, confirming that the Flixon TV service is no longer available under the Flixon brand and all of those customers are now serviced by OmniGo.tv, a service directly operated by Omniverse One World Television.

Flixon said it's now "re-inventing" its offering to focus on international programming and that a new web site will be launched in the coming weeks.

You can read the full announcement here.  JB

Jeff Baumgartner 4/17/2019 | 10:06:36 AM
Re: Flixon's 'white label' OTT/'master distributor' angle and a Flixon 'media pack' slide deck offers a bit more detail about its arrangement with Omniverse. It says Flixon is a "partnership with Omniverse One World Television" that "allows distribution partners to offer a service to customers who want to watch what they want, wherever they are on the schedule they choose."

Jeff Baumgartner 4/15/2019 | 3:26:18 PM
Flixon's 'white label' OTT/'master distributor' angle I did come across some info posted by Flixon that would fit the notion that there's a master reseller deal involved.

In some materials, they tout a "white label OTT" solution that, they claim, can be deployed in 2-4 weeks with a pay-as-you-grow capex model – which seems to also fit in with the commission-based model that Omniverse has discussed.

From the materials: "You can now use your identity to our channel packages as you market your content and could customize our product with your brand logo, and identity-enabling customers to associate the service with you."

Elsewhere, Flixon describes itself as a "master distributor for a large selection of prime U.S. channels available through the United States through B2B distribution and direct to consumer," but doesn't mention there any relationship with Omniverse/Hovsat. JB
Reply | Post Message | MESSAGES LIST | START A BOARD

Jeff Baumgartner 4/12/2019 | 7:41:26 PM
Why the rebrand? One thought is it's to make it clearer on who owns those customers. As Jason DeMeo said to me earlier, the joint venture (omniverse/hovsat) own the subs while these other partners are more akin to prepaid service resellers that work on a commission-based model.  However, it seems as though Flixon plays a bigger role here. JB
Reply | Post Message | MESSAGES LIST | START A BOARD
EDUCATIONAL RESOURCES
sponsor supplied content
Türk Telekom delivers digital services with a responsive container foundation
5 ways to innovate for 5G and edge: Transform your network with a certified partner system
Building an edge computing strategy
How Red Hat and Verizon are building the hybrid edge together
Evolving CDNs to keep pace with capacity, quality, and efficiency demands
Preparing for the future of cable
Cable next-gen broadband technology: Network virtualization
How cable operators are modernizing for edge computing
Educational Resources Archive
More Blogs from The Bauminator
Kimberly Maki lends SCTE a helping hand