The 6G mess is getting out of hand

Journalists and analysts turn Nostradamus at this time of year, concocting predictions that have usually been forgotten by the time Mobile World Congress (MWC) spins around in February or March. Over the next few weeks, readers of the telecom trade press can expect to see a lot more about such familiar topics as 5G evolution (yawn), private networks (sigh), the metaverse (seriously?), open RAN (why?) and the public cloud (yikes).

And then there's 6G. The mobile standard that succeeds the one currently being deployed certainly won't appear in 2023. Based on the industry's usual upgrade cycle of roughly 10 years, most soothsayers don't think 6G will be a commercial reality until 2030, or thereabouts. But it's become an increasingly vigorous workout for the telco exec's mandibular muscles at cocktail parties (such as the Light Reading one in New York this week, pictured below), and the chatter about 6G will take up even more conversation time next year. Much of it will not be very positive.

If it is not already broken, the whole Gs cycle looks dangerously close to it. Regular improvements to network technology  termed "Releases" by the 3GPP, an international umbrella group of regional standards bodies  are not very marketable, even if they hold attractions for telcos. Occurring less frequently, but coinciding with an extra-special Release, a G is more an Olympics-style technological event, a rare opportunity to make a lot of noise and drum up industry and government support. 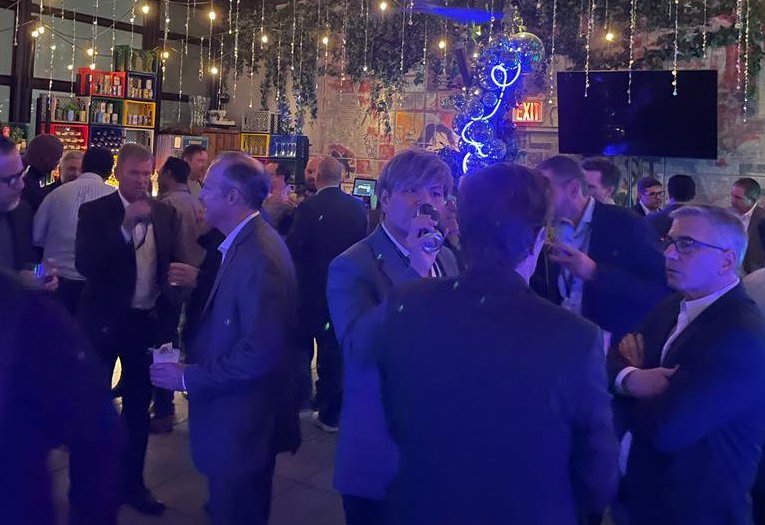 Yet marketers overpromised on 5G, which has been given a bad rap by the mainstream media because, in its present form, it looks no different from 4G. Without it, networks and in-use spectrum bands would eventually become overloaded and your average smartphone-thumbing tweenie might not be able to stream TikTok videos in high definition on the number 77 bus to Wandsworth. But telling someone they could be denied a product or service they currently enjoy is not much of a consumer pitch. (Buy more expensive wheels or never drive again?)

Some telco execs, too, are evidently tired of flinging money at equipment that doesn't bring additional customers or boost revenues. Basestations need changing every now and then like a pair of jeans as they start to wear out, but fewer operators want a whole new wardrobe of expensive clothes when the dance is slowing down. Maria Cuevas, BT's networks research director, recently used the "if" word when talking about 6G. If it does happen, she does not want it to be a "massive step change" or "full replacement cycle."

From the wacky to the prosaic

People involved in the Gs must play Nostradamus themselves, predicting what society's telecom needs and interests will be not in the next few months but several years from now. Increasingly, it looks like an outdated, bonkers approach to invention in such a fast-changing, technology-obsessed world. It hardly smacks of the DevOps philosophy (quick response and adaptation) that telcos say they admire.

Ideas about 6G range from the wacky to the prosaic. The former includes visions of brain-computer interfaces (BCI), whose most extreme example in science fiction was Clint Eastwood piloting a fighter plane with the power of thought in the 1982 movie Firefox. Ericsson and the University of Surrey have notions of providing connectivity for the senses of taste, touch and smell.

Whether far-fetched or realistic, much of this strays outside the boundaries of telecom. The industry struggles to imagine how networks can be improved other than by speeding them up, adding capacity, cutting latency, boosting energy efficiency and making them more autonomous  all of which is happening, to some degree, in 5G.

A popular view is that the even Gs fare better than the odd ones, correcting the mistakes of their predecessors. While hardly anyone even remembers 1G, the mobile voice hit of 2G is still widely used today. With 4G, the industry finally got mobile data right after years of 3G fumbling. But this sequence was already broken with the move to 5G, which is really just 4G with an extra shot of caffeine.

It probably goes without saying that 6G will incorporate more virtualization and openness than 5G, allowing operators to run their radio systems in the cloud and build true multivendor networks. Exciting as all this may be to a telco technology department, it is nearly unexplainable to your TikTok-addicted tweenie, let alone an elderly technophobe still trying to figure out what the Internet is. Operationally important? Possibly. A game-changer? Most certainly not.

Perhaps the biggest problem of all is the technological bust-up between China and the US. It has already seen Huawei and ZTE banished from several countries, Ericsson and Nokia put on a starvation diet in China, and China cut off from semiconductors and chipmaking tools. None of that is very conducive to the international collaboration that produces global standards. While some have played down the risk of fragmentation at the standards level, Ericsson CEO Börje Ekholm takes it very seriously indeed  and he runs the biggest 5G vendor outside China.

There has been some barmy commentary on the subject in the mainstream press. Writing in the Financial Times last month, Elisabeth Braw, a fellow at the American Enterprise Institute, said: "If western countries don't collaborate  they face a very real risk of having to accept Huawei's 6G." Unless China's army rocks up on foreign shores and imposes 6G on the backward natives at gunpoint, nobody has to accept anything from China.

Braw also seems oblivious to Huawei's malaise, arguing it now "has far better technological capabilities than it did when 5G was under development." Others would disagree. Several waves of US sanctions mean that "even at home, Huawei is now very uncompetitive, which has led to a significant decline in market share," wrote Richard Windsor of Radio Free Mobile in October (referring mainly to smartphones, where there are lots of Chinese alternatives, rather than networks, where there aren't).

In all likelihood, fragmentation won't involve the Chinese foisting their 6G standard on a colonized Europe. But it would mean settling for smaller economies of scale, and it would intensify an East-West technology war that Ekholm fears the West could lose. "Despite strong 5G investment in the US, it's less clear whether a western ecosystem will keep up with the vast R&D spend in Asia  particularly China  that's already happening," he told Light Reading last year.

If they did fall behind China technologically, the countries buying the West's less capable 6G might also fall behind economically. Selling products and services to countries that feel no loyalty toward either China or the US would be harder. Parts of Africa and Latin America would be major battlegrounds. But before any of that, the industry should probably work out if 6G is worth bothering with at all.