Network-testing company Keysight Technologies plans to begin testing communications in the terahertz spectrum bands. Such bands are viewed as a possible location for early 6G communications.

"Keysight will design, develop, test and demonstrate 6G electronic test and measurement technologies at our indoor facilities in Santa Rosa, California; Santa Clara, California; and Everett, Washington," the company wrote in a request to the FCC to conduct the tests. The company said the tests would occur in the spectrum bands between 275GHz and 330GHz.

"These frequencies  long considered to lie at the outermost horizons of usable radio spectrum  are becoming increasingly well-suited for the development and deployment of new active communications services and applications," Keysight explained. 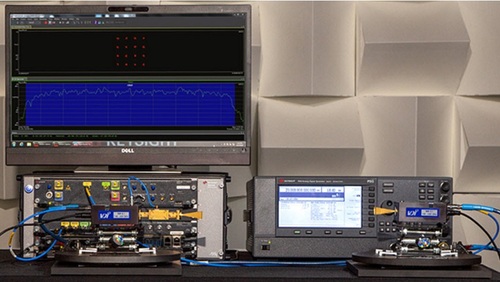 Keysight said it plans to test its products that support transmissions up to 330GHz.
(Source: Keysight)

The FCC voted in 2019 to open up spectrum above 95GHz for such tests. At the time, the agency cited the potential of "unprecedented opportunities for new experimental and unlicensed use" that would "help ensure that the United States stays at the forefront of wireless innovation."

To be clear, this isn't the first time Keysight has signaled its interest in 6G. In 2019, the company joined the 6G Flagship Program  supported by the Academy of Finland and led by the University of Oulu, Finland  to explore communications "beyond 5G."

"The next generation of wireless communications ... is expected to leverage spectrum above millimeter waves called terahertz waves, from 300GHz to 3THz," the company wrote at the time. "These frequencies form an important component in delivering data rates of up to one terabit per second and ultra-low latencies."

And in 2020, Keysight was among a number of major wireless companies that joined the Next G Alliance, an association fronted by ATIS that is working to push the development of 6G technologies in North America.

Keysight isn't the only company selling network-testing equipment focused on 6G. For example, Rohde & Schwarz kicked off a 6G marketing campaign  complete with its own #ThinkSix hashtag  in 2020.