"It's way too early to talk about 6G," said Fredrik Jejdling, the head of Ericsson's networks business, in February. Rival equipment vendor ZTE would disagree. Today, it disclosed details of a 6G partnership with China Unicom, one of the country's big three national operators. Service speeds of 20 Gbit/s are envisaged.

It's not the first time China and Chinese organizations have paraded their 6G colors. In February last year, Eric Xu, one of the rotating bosses at Huawei, told reporters that 6G was preoccupying his mind. "I anticipate that by 2028 or 2029 or 2030, we are going to see 6G as extensively discussed as we are seeing 5G today," he said. Later that year, Unicom set up a research group focused on Terahertz communications, one of the core technologies for 6G. In its 2019 annual report, Huawei said it had kicked off research into 6G, including "air interface technologies, new network architectures, and key enabling technologies."

Now ZTE has waded in. Its just-signed cooperation agreement with Unicom will explore three-dimensional connectivity, Terahertz communication and the integration of communications and sensing technology, it says. The development of new standards is one of the companies' goals.

None of this 6G grandstanding will improve relations with the US, whose campaign against Chinese vendors is driven partly by fear of China's 5G dominance. Recently published data shows that China Mobile and China Telecom, Unicom's two rivals, already lay claim to more than 65 million 5G customers just months after the technology was launched. This year, Chinese operators plan to erect about half a million 5G basestations. On these measures, the US simply cannot compete against a resource-rich country of about 1.4 billion people. When it comes to the development of new and potentially game-changing mobile applications, this hands China a major advantage. 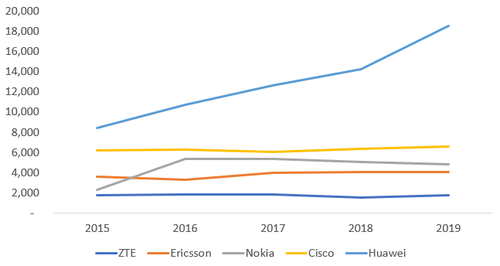 Equally worrying for US hawks is the lack of any big 5G equipment makers in the US, other than semiconductor firms. Ericsson and Nokia, the suppliers responsible for most of the US market's 5G infrastructure, are European companies that have not been able to keep pace with Huawei in research and development spending. Cisco, the only US vendor with a serious claim to be a 5G infrastructure player, also lags.

As critics point out, Huawei has a much broader range of interests than either Ericsson or Nokia, including a handset business that accounts for more than half its annual sales. Nevertheless, as it has increased R&D expenditure it has become far more prominent in the standards community than it ever was in the pre-5G era, contributing many of the patents that underpin the most advanced mobile technologies. Chinese vendors may be locked out of the US market. Excluding Chinese intellectual property is not so easy.

Any attempt at that would probably spell the fragmentation of the international standards community, a prospect that alarms its defenders and the companies, including Huawei, that have profited from globalization. "If further fragmentation were to take place, the whole industry would pay a terrible price," said Guo Ping, another of Huawei's rotating bosses, earlier this week, blaming the disappearance of US equipment vendors on the absence of a unified standard in the days of 3G. "The lesson here is that unified standards are vitally important to industry development."

But Chinese support for global standards might only hasten their demise while China's R&D heavyweights continue to portray themselves as 6G pioneers. Bifurcation would inevitably drive up 6G costs, hinder innovation and concentrate risks in particular regions. It could point the way to a US telecom sector entirely free of Chinese influence. Amid concern about the 5G lag, the question about this future scenario is whether it would leave the US even further behind China in 6G.