6G will not be a new radio standard, say BT and Vodafone

Nobody really knows what 6G will be, or even if the generational approach will still be in use eight years from now, when it would be expected to arrive. The most far-fetched ideas involve brain-computer interfaces, allowing people to control machines by thought. The most humdrum envisage more energy-efficient basestations and open interfaces. But two prominent telco executives think they already know what it will not be  and that's a new air interface.

Andrea Dona, the chief network officer of Vodafone UK, and Howard Watson, the chief technology officer of BT, are increasingly confident 6G will use the same orthogonal frequency division multiplexing (OFDM) technology on which 5G is based. It is a significant development simply because much of the research for previous generations was focused on the air interface. 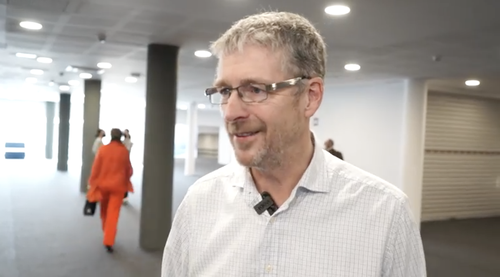 "6G is not going to have a new connectivity layer," said Dona at a press conference this week. "It's not going to because there is nothing coming out of universities in terms of new access methodology. It is still going to be OFDM technologies, the same technologies I studied 20 or 30 years ago at the University of Padua."

His remarks came days after Watson delivered the same message at the recent Mobile World Congress (MWC) tradeshow in Barcelona. "I love the fact it's the same radio standard," he told Light Reading. "So far it's looking like that's the same."

If they are right, the International Telecommunications Union (ITU) arguably faces an even bigger challenge than usual. Before the end of the year, the United Nations body is expected to outline its vision for 6G, setting the parameters that international standards groups will subsequently follow, according to Adrian Scrase, the chief technology officer of the European Telecommunications Standards Institute.

When it published its 5G vision in 2015, the ITU devoted much of its attention to radio, as shown by the basic press release it issued at the time. "The next step is to establish detailed technical performance requirements for the radio systems to support 5G, taking into account the needs of a wide portfolio of future scenarios and use cases, and then to specify the evaluation criteria for assessment of candidate radio interface technologies to join the IMT-2020 family," it said. IMT-2020, essentially, is the ITU's codeword for 5G.

But if this part remains the same in 6G, telecom authorities will need to come up with something that warrants industry and government attention. And here, there are literally dozens of competing ideas  many of which look tangential to telecom.

Dona thinks 6G will have to consider future needs more seriously than 5G ever did. "You have to shift away from a technology-based solution to a more service-based solution and that is the foundation of 6G," he said. "You are getting to a point of plateau in terms of connectivity, and you need to look at the services that a combination of various technologies can deliver." Networks will be much more software-based than today's, he reckons.

Yet despite his confidence that the air interface will not change, Watson hopes 6G will aid the introduction of higher spectrum bands and the rollout of additional sites. "I think what brings 6G to life is millimeter wave and high-scale densification," he said. "We don't have the workloads for that now in terms of consumer or enterprise demand, but by the end of the decade we'll be there."

Research is already underway into the use of much higher-frequency Terahertz spectrum, where the drawback is the short distance that a mobile signal would travel. "If we can get that to work, then access to large amounts of spectrum is probably not going to be too much of a problem," said Scrase. "How we harness it and make efficient use of it may be more challenging. We are only talking a few tens of meters of propagation, but for many of these applications we are only looking at that sort of distance and certainly not wide-area networks."

For AT&T, there seems to be greater interest in improving the uplink capability of mobile communications through a system known as distributed MIMO. "If I can get to the point where the device can talk to many radios at the same time, then that gives a distinct benefit on the uplink, and this is where we are focused now on proving some of those capabilities," said Gordon Mansfield, AT&T's vice president of converged access and device technology, during an interview at MWC. Faster uplink speeds, of course, could be critical in a world of extended-reality applications.

But not everyone may be ready to accept OFDM as part of 6G without question. Cohere Technologies, a software startup with a technology that could boost network capacity, is now pushing a modulation scheme called orthogonal time frequency and space (OTFS) as a potential 6G candidate.

"We spent a good bit of time creating a solution that included this new waveform," said Ray Dolan, Cohere's CEO, at MWC. 6G or even late-stage 5G could include "a suite of standard airlinks," he told Light Reading. The future of mobile is still up in the air.