With $2.7B in proceeds, CBRS auction showing 'unusual' activity

Activity in the FCC's ongoing auction of 3.5GHz CBRS spectrum licenses isn't playing out quite like the agency's other recent auctions.

"It is unusual at this stage of an auction to have such a large difference in aggregate bidding, which reflects the demand from the bidders, and gross proceeds, which represents the amount of supply that is available to meet the bidders' demands," noted Ari Meltzer and Rick Engelman with Wiley Rein, a law firm that is heavily involved in telecom matters.

In a statement distributed to the media, the lawyers wrote that, as of round 31, aggregate bidding in the auction reached $3.898 billion, 51% more than the auction's gross proceeds of $2.576 billion.

Figures by Wiley Rein show that the FCC's CBRS spectrum auction  dubbed Auction 105  is tracking differently than past FCC spectrum auctions.
Click here for a larger version of this image.
(Source: Wiley Rein)

"While excess demand is falling in the CBRS auction, it is doing so at a slower pace than in recent prior auctions," explained the Wall Street analysts at New Street Research in a note to investors this weekend. "With excess demand lingering, particularly in large urban areas (where prices are at $0.35/MHz/POP), it seems likely aggregate bids will move higher."

The FCC's CBRS auction reached round 32 in bidding Monday morning, with $2.738 billion in gross proceeds. There were 278 counties where bidding demand exceeded supply  a figure that some analysts noted has been falling recently.

"This excess demand has been trending downward, with a 32% drop on Friday and a 40% drop on Thursday," wrote the Wall Street analysts at Raymond James in a note to investors this weekend. "The aggregate bidding doesn't yet mirror that downward trend primarily because much of the excess demand is in large and expensive counties." 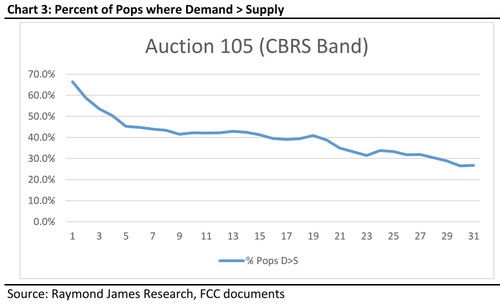 The analysts at Raymond James noted that the locations where demand exceeds supply are declining. "Pops" stands for "points of presence," and is roughly similar to the measurement of population in a particular location. Click here for a larger version of this image.
(Source: Raymond James)

Continued the Raymond James analysts: "While some of the most populated counties, such as Cook (Chicago), Harris (Houston), and Miami-Dade have reached equilibrium (i.e., demand is equal to, or less than, supply), other large locations like Los Angeles, San Diego, and New York still have demand in the mid- to high-teens (vs. a supply of just seven licenses per market). We will continue to monitor Auction 105 (current average price of $0.126 per MHz/POP) as it has not yet entered the auction tail phase."

Others, however, believe the auction is entering its end game.

"The CBRS auction is rapidly entering its third and final stage," wrote analyst Frank Rayal on LinkedIn. "Over the past week, many large markets have settled (Chicago, Phoenix, Houston, Miami). On the other hand, Southern California is emerging as the most desirable area with the highest dollar value. Should the same pace continue, the auction could wrap up next week with a total raised between $3B-$4B."

Indeed, much about the CBRS auction has defied predictions. For example, estimates on the total amount of money it would raise ranged from just $1.3 billion to fully $10 billion.

As in past auctions, the FCC is not identifying CBRS bidders during the auction, instead only releasing information on which locations are receiving bids, and how much they're bidding. The agency will keep bidding open until there are no more bids, a process that could take weeks or even months.