Until 2020, the worst-ever year for Mobile World Congress was 2009, when visitor numbers fell to 47,000, from 55,000 the year before, as the telecom industry dealt with the impact of the 2008 financial crash. This year they sank from 109,000 to zero after the GSM Association (GSMA) finally pulled the plug on its 2020 jamboree. The move followed an exodus of exhibitors and other attendees apparently spooked by coronavirus and the risks it posed.

A widespread assumption is that MWC will recover and that this time next year, when the disease has been largely forgotten, visitors will return en masse to Barcelona for the annual mobile industry pilgrimage and its overpriced hotel rooms and tapas. But there's a well-known phrase about assumptions...

At this stage, few people will be thinking about another cancellation in 2021, and yet coronavirus continues to spread and claim lives. While some recent news reports suggest the infection rate is slowing, the World Health Organization has warned that a vaccine may be 18 months away. Some medical experts fear that COVID-19  as it is now officially known  could further mutate, complicating the vaccine-development efforts. 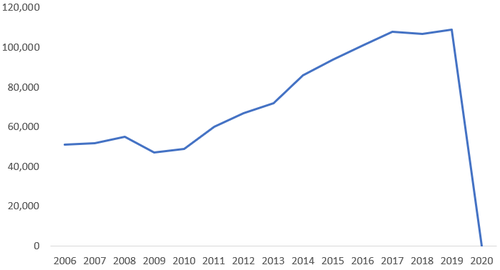 Unless a pandemic ensues, one possibility is that executive fear diminishes, and companies decide coronavirus is no riskier than influenza (which, as many have pointed out, is still a threat to life in 2020). But if the virus remains any kind of problem, organizations would still be dealing with a disease that is relatively new and unknown  unlike the centuries-old flu. Risk aversion is currently on the rise: Shortly after MWC was canceled, IBM pulled out of the RSA Conference in San Francisco (February 24-28), even though less than a fifth of attendees and exhibitors travel to it from outside the US.

It's still relatively early days in the virus's lifecycle, though, so how that will play out is a major unknown.

But the thousands of companies that invest in a presence at MWC (the show was due to have more than 2,800 exhibitors this year) will certainly be asking one key question: Is it worth it? (More on this later...)

Less than a week has passed since the show was called off and the companies that had spent large sums of money and time planning for MWC 2020 are now scrambling to pick up the pieces, rewrite their marketing plans and even think about what to do next February.

Not the only concern
Unfortunately for the GSMA, there are other factors that will affect this strategizing. Protests about the impact of international travel on climate change are growing louder, and telecom executives are feeling pressure to show they are part of the solution while at the same time appearing to be more virtuous. Noting that 25% of carbon emissions are from transportation, Ericsson is a standout example. "We are creating smart factories but also having R&D and production close to customers to reduce transportation and the impact on the climate," said Stella Medlicott, the Swedish vendor's chief marketing officer, during a press event in London last week. It's worth noting that large companies do not make such decisions just out of the goodness of their hearts.

Moreover, while Ericsson appears to be all about reducing its impact on the environment, it's planning on communicating the marketing messages it had planned for Barcelona in a series of roadshows  it will take its marketing to customers, instead of welcoming them to its MWC village. It seems doubtful this will be a carbon-neutral experience.

Nokia, which withdrew from MWC hours before the event was scrapped, is planning something similar. And although some exhibitors are talking up the "virtual meeting" as an MWC alternative, others that can afford the money, people and time will follow the same route as the Nordic giants.

But that's the near term: What happens next?

But there's a reason it enjoys a reputation as an event where deals are done and plans are conceived  anecdotal evidence from multiple companies suggests MWC is vital for building and cementing business relationships, meeting new contacts and setting up order books for the rest of the year. Because that all happens in less than a week at a single location, it is economical in terms of time, effort and expense.

Now, though, companies will be monitoring their business performance in a year without that concentration of meetings and economic opportunities, and comparing it with their financial projections for 2020, their multiple KPIs and the impact of previous MWC events.

The widespread assumption is that more money, time and effort will be eaten up post-cancellation. Despite that, business is likely to suffer in some way. Yet this view could also be challenged: While it's impossible to say what might have happened in Barcelona in late February if the show had gone ahead, a lack of business impact could prompt questions about the need to invest so much in what has long been the biggest single meeting point for the mobile industry each year.

MWC pain points
"We can't afford not to be there" is a common refrain among exhibitors: FOMO (fear of missing out) is a major MWC factor.

But having a presence at MWC is a tough call for many, and especially the small and medium-sized companies that have articulated unhappiness with the high fees the GSMA charges for floor space, meeting rooms, stand checks, ancillary services and more. (Will there be a pricing review for MWC 2021 perhaps? The GSMA will certainly face demands that prices should be cut.)

Now the show has been canceled, the value of that sizable annual investment will be scrutinized even more. With a precedent for cancellation established, the industry's reliance on MWC will be queried.

Which brings us back to the question: Is MWC worth it? Has its real and perceived value been eroded by this year's cancellation? Can companies find a way to cut their dependence on the show without affecting their business potential?

It's certainly worth it for the event's organizer: The Barcelona show is the biggest in an events portfolio run by tax-exempt subsidiary GSMA Ltd. that, in 2017, generated revenues of more than $216 million, according to documents filed with the IRS.

MWC participants will never forget the show's cancellation and the ensuing fallout. And whatever happens, next year's MWC could turn out to be the most critical one ever.