Wisper, a WISP, finds something better than 5G

"I don't believe 5G is necessarily the right tool for WISPs," said Nathan Stooke, the CEO of Wisper, one of the thousands of wireless Internet service providers (WISPs) around the US. "It just gets very, very expensive."

But Stooke believes he has found the right tool for Wisper's fixed wireless efforts: equipment from Tarana Wireless.

And no, Stooke said Tarana is not paying him directly to be a spokesperson for the company, nor is it paying Wisper to install its equipment. "We're putting this [information] out because I firmly believe in it," Stooke said.

In search of solutions

According to Stooke, Wisper traces a long and winding journey to Tarana. Stooke founded the company in 2003, in the very, very early days of fixed wireless. He said he discovered the technology while attempting to help his neighbors get online, and in the subsequent years slowly built a multimillion-dollar business covering parts of six states and 20,000 total customers.

Over the course of that buildout, Stooke said Wisper has worked with a number of equipment suppliers, including Motorola, Ubiquiti and Cambium Networks. He said Wisper has also dabbled in using 4G LTE technology for its fixed wireless Internet offerings that today stretch across fully 1,000 transmission sites. "We've tried everything," he said.

But it was the FCC's CAF II program in 2018 that pushed Stooke to look for alternatives to slower, proprietary offerings and expensive LTE fixed wireless equipment. "That's when I came across Tarana," he said, explaining that Wisper will receive a total of $220 million over the next several years from the FCC's CAF II program, which is designed to help fund the construction of Internet services in rural areas.

Using 40MHz of spectrum in the 3.5GHz CBRS spectrum band, Stooke said Wisper has been able to provide more than 100 Mbit/s speeds to large numbers of customers across miles of territory. And though that's not necessarily groundbreaking, Stooke said Tarana's "secret sauce" involves preventing interference in its transmissions. By doing so, Tarana's equipment allows Wisper to provide services to a much larger number of customers, across a much larger area, and at a much lower cost, than it could with other products from other providers, including those offering 4G LTE and 5G equipment.

That interference protection "allows them to solve the other problems we have," Stooke said, explaining that the technology also addresses issues related to network capacity, customers on the outskirts of Wisper's coverage area, and connections affected by foliage or weather. "It's really neat how solving the one problem of interference actually solved a lot of other problems," he said. 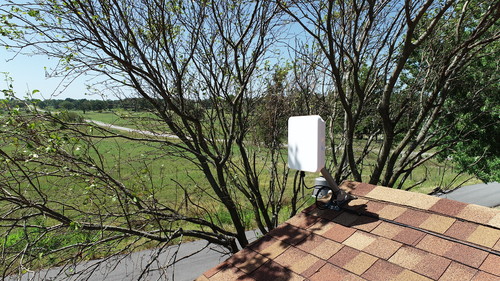 Stooke said Wisper has so far deployed Tarana's equipment across 40 of its transmission sites and is planning to use the company's technology exclusively in the future. He said Wisper now expects to meet its CAF II buildout obligations "in large part because of what Tarana brings to the table."

Wisper isn't Tarana's only fan. The company announced $50 million in financing earlier this year, and operators ranging from GeoLinks to ATN International are among the fixed wireless providers testing its technology.

Tarana was one of a number of companies in the early 2010s hoping to sell wireless backhaul technology for small cells. As the small cell opportunity dried up, Tarana turned its sights to fixed wireless  a related market that can also make use of fixed, high-speed wireless connections.

Stooke's comments on the economics of using 5G for fixed wireless Internet services are noteworthy considering Verizon and T-Mobile are both embarking on major expansions of their respective 5G-powered fixed wireless Internet offerings. However, both companies have said that the economics of their respective efforts are unique because they're already offering profitable mobile services, and plan to use that same equipment to offer newer fixed wireless services in areas where they expect to have excess network capacity.