What the iPhone's super cycle means for 5G operators

There are growing indications that Apple's iPhone  now featuring 5G  is enjoying a super cycle that could extend into next year. And that's undoubtedly music to the ears of network operators hoping to leverage 5G to rake in new customers and more revenues.

After all, the purchase of a new phone is often a catalyst for some kind of change in service, whether that's an upgrade to a more expensive plan or a switch to a new operator.

According to the analysts at Counterpoint Research, sales of Apple's new iPhone 12 are tracking almost exactly to the sales of its previous iPhone 6, a device the firm said helped Apple achieve its first super cycle at the cusp of the transition to 4G. A super cycle is a period of elevated sales, and for Apple such cycles often represent a year of iPhone sales that don't taper off like they normally do. 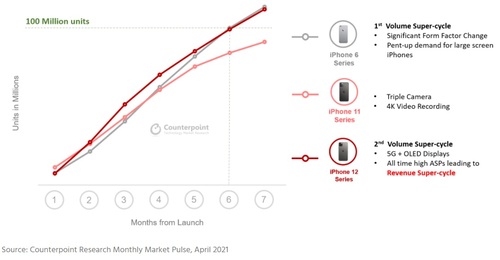 Apple's iPhone sales have remained strong through 2021. Click here for a larger version of this image.
(Source: Counterpoint Research)

"In the case of the iPhone 6 series, the strong pent-up demand for larger-screen iPhones drove the sales, while for the iPhone 12 series, the addition of 5G capability and a full OLED screen attracted customers," Counterpoint wrote in a release. "With the ASP [average selling price] for Apple phones being at an all-time high, the iPhone 12 series' volume super cycle will also lead to a revenue super-cycle breaking its own record every year."

Further, the good times for Apple may continue through next year. According to a report from Bloomberg, Apple is asking its suppliers to increase production of its next-generation iPhones by 20%. The company is widely expected to release a new iPhone in the fall.

News of rising iPhone sales is probably cause for celebration among carrier executives. For example, Verizon's Ronan Dunne speculated last year that an iPhone super cycle would be a "catalyst" for a 5G adoption cycle.

And that certainly seems to be playing a role in the US wireless industry, based on the rise in overall customer additions among US network operators during the first few months of 2021.

Super cycles are important to wireless network operators like AT&T and Verizon because they can help the operators gain more customers and more revenues. For example, when customers buy a new phone, they often re-evaluate their service plans. And that's an ideal opportunity for operators to push their newest, most expensive unlimited data plans. Indeed, both AT&T and T-Mobile recently removed usage caps from their most expensive unlimited data plans to encourage more customers to subscribe to those plans. Those top-tier plans are often the ones that generate the most profits for operators.

For example, Verizon's goal is to get 50% of its customers to subscribe to its most expensive, "premium" unlimited plans by 2023, up from 21% today. The operator is doing so in part by keeping the speedy version of its 5G network exclusive to its expensive plans.

But new phone purchases can also be an opportunity for customers to switch to a new operator. And new data from the financial analysts at Cowen certainly seems to indicate that's now on the table for a growing number of US mobile customers.

"The number of postpaid respondents planning on switching their provider reached record levels (since 1Q14), with 18.7% planning to switch from their current provider, up from 14.4% last survey and 13.7% in 2Q20," the analysts wrote in a recent note to investors, citing their quarterly survey of around 1,100 mobile customers at the beginning of June.

That pent-up demand for a new service provider is likely why Verizon, AT&T and other operators are launching increasingly aggressive free phone promotions. They're either worried about losing their existing customers or anticipating gaining new ones. Further, those promotions likely are helping to juice Apple's sale of iPhones in the US.

Ultimately, Apple's reported success in selling iPhones will put more 5G-capable phones into customers' hands. And that, in turn, will increase the number of customers who might pay extra for the types of high-speed 5G data plans that T-Mobile, AT&T and Verizon are all selling.