Vodafone's towers aren't worth as much as it thought

Carved out and dressed up as an infrastructure asset, Vodafone's towers could be worth as much as 20 times their annual earnings, reckoned CEO Nick Read back in July 2019. That would have given the portfolio of about 61,700 towers a value of roughly 18 billion (US$21.4 billion) at the time. No wonder a sale of shares looked so enticing.

Since then Vodafone has plonked its masts into a separate business called Vantage Towers. After transferring thousands of UK towers into the new venture, it can now boast 82,000 across Europe, making it one of the region's biggest towercos. And yet the price range announced this morning for an imminent initial public offering (IPO) values the business at between 11.4 billion ($13.6 billion) and 14.7 billion ($17.5 billion). Even at the upper end, this is quite a bit less than Read first imagined.

Part of that is because basic earnings have turned out to be not quite as juicy as Read's original estimate of 900 million annually ($1.1 billion). The pro forma number for last year is roughly 742 million ($883 million), including UK and Italian assets. Multiplying that by 20 produces a valuation only slightly above the IPO range. 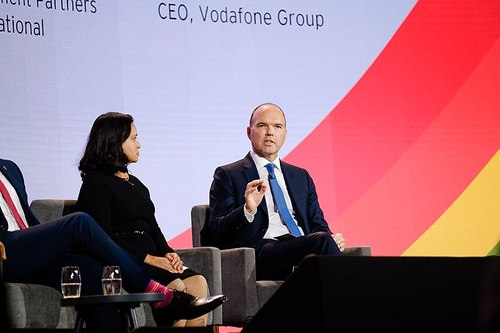 Vodafone's Nick Read is one of the original towermaniacs.

The lower-than-expected valuation is not a total shock. Read could hardly have foreseen a global pandemic that has killed parts of the travel industry, crippled retailers and restaurateurs and created the worst debt crisis in decades. Investor concern about a future rise in interest rates is reportedly on the rise. That could hammer valuations, just as it increases the pressure on debt-loaded operators to reduce leverage.

Vodafone, it needs remembering, is up there with some of Europe's worst balance-sheet offenders. At the end of September, when it last provided an update, it had about 44 billion ($52 billion) in net debt on its books. That is about three times what it makes each year in basic earnings. It is also roughly 4 billion ($4.8 billion) more than Vodafone is currently worth on the London Stock Exchange, based on today's exchange rates.

Overall interest payments of 451 million ($536 million) wiped 38% off Vodafone's operating cash flow in the six months to September and have weighed on profitability. A future rise in payments would be a concern for any company that is not growing, and Vodafone's annual sales have dropped from nearly 50 billion ($58.3 billion) in 2015 to about 45 billion ($53.5 billion) in 2019. It explains why towers are up for sale.

The attraction for investors is that towers have seemed a safe long-term bet. Demand for mobile connectivity is soaring (even if service revenues are not), putting a premium on the infrastructure needed for mobile network equipment. Towercos, the owners of this infrastructure, are in an enviable position as landlords renting out space to the likes of Vodafone and Deutsche Telekom. Historically, they have been subject to far less regulation and competition than service providers. Nor do they face the same existential threat posed by the Internet giants.

This probably has more to do with broader concerns about the economy than anything towers-specific. Nonetheless, not everyone is persuaded the sums changing hands for towers can be justified. An acquisition spree by Cellnex led to a debt spike in 2020, when net debt rose to 6.5 billion ($7.7 billion) in December from 3.9 billion ($4.6 billion) a year earlier. Cellnex reckons it can deleverage quickly, but that amount is currently about 5.5 times as much as basic earnings. Profits have grown mainly thanks to acquisitions.

And here's the thing: When all the towers are bought or built, the only way for Cellnex and other towercos to boost sales is by squeezing their tenants harder. Service providers know it, too. That is why most of Europe's incumbents are in no hurry to cede control of their towers, and why towers might not be as safe a bet as previously thought.