Learning new skills is hard enough in middle age for an individual, let alone a global corporation. But that has not deterred Vodafone. For the 40 years of its existence, the UK-headquartered company has mostly built networks and sold the connectivity services they support. Suddenly, it looks crazy about software. Over the next few years, it plans to add another 7,000 software engineers to the 9,000 it employs already. At its current size, this would mean nearly 17% of staff work on software.

"Techco" is the word Vodafone has bandied around to describe this metamorphosis. The desire to be more than just a plodding, utility provider of "dumb pipes" is nothing new in telecom. For years, operators have sought recognition alongside more attractive Internet players. Most initiatives have been ill-conceived, lacking in detail and doomed from the outset. The Vodafone plan is, at the very least, more clearly articulated.

The software fixation is not unique or original. Like other industries  and more than many  the telecom sector is being overrun by software. Even in the plumbing of the network, value has shifted from boxes to code  so much that talk of "commodity hardware" is routine. The stock of US software giants has soared as Vodafone's has fallen. Google's share price has risen nine-fold in the last decade. Vodafone's is down 28%. 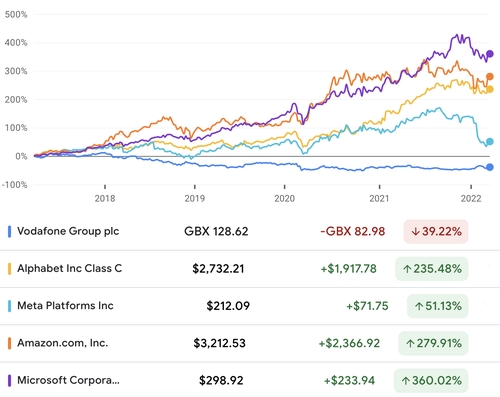 There are several goals for its software reinvention. Most fundamentally, Vodafone wants to ensure it is not beholden to third parties for critical software and technical expertise. Today, Vodafone buys most products for a given mobile site from the same supplier. With future interfaces, it expects to use a multiplicity, meaning various components will need stitching together. It would rather take on the effort than trade heavy reliance on an Ericsson for dependency on a systems integrator like Accenture.

This and related ambitions are unlikely to excite many investors. More eye-catching to the Vodafone outsider is a "desire to create new revenue streams" from software, in the words of Andrea Dona, Vodafone UK's chief networks officer. Besides developing software that it can sell, Vodafone could "expose" some of its network functionalities externally through so-called application programming interfaces (APIs). "We have a very well-defined roadmap of APIs we are working with business colleagues to start exposing," said Dona.

Revenues would accrue not from the actual API but rather from the Vodafone services a developer would need, according to James Crawshaw, a principal analyst with Omdia (a Light Reading sister company). "The API is free but by reading the documentation and getting the application to talk to their systems using that API, you would use their services," he said. "Once you start using their network, they can charge you on a gigabyte basis."

Vodafone would essentially be doing the same thing Amazon did years ago when it first established AWS, the public cloud business whose revenues grew $19.8 billion last year, to more than $62 billion. "Jeff Bezos [Amazon's founder] said if you develop a capability internally you need to expose it as an API so that another part of the business can take advantage of it," said Crawshaw. "Then they realized they could make them available to third parties and that was the origin of AWS."

But interest in monetizing APIs is not confined to Vodafone. It extends to operators including AT&T and BT as well as kit maker Ericsson, which has justified a planned $6 billion takeover of Vonage on the API-related opportunity. Ericsson seems drawn to the success of Twilio, a kind of API broker between developers and telcos. Using Twilio's APIs, a developer can design an application for multiple operator systems instead of writing one app per telco. Through Vonage's own API business, Ericsson hopes it can replicate that model for the 5G core, giving developers the means to write 5G core apps for an entire community of networks.

This alone casts doubt on the size of the opportunity for Vodafone, which could be entering an extremely competitive market. Asked during a press conference last week about Ericsson's move, Dona said: "If they have the capability with Vonage and can expose some of their inherent 5G core functionality, then why not?" Ericsson is a prospective partner, he told analysts and reporters. "The days of the walled garden are gone. If you try to protect it, your slice of the cake is very small."

An even bigger danger is that a costly software recruitment drive happens without a hoped-for improvement in sales. Whether it hires new faces or retrains old ones, Vodafone may need to spend heavily to lure and keep software talent. A CNBC report in 2019 estimated that a starting salary for software engineers in Silicon Valley was about $150,000. Including pension and other costs, Vodafone Group last year paid out about $59,000 per worker internationally. Its wage bill might have to rise sharply.

One option would be to continue cutting the size of the overall workforce through automation, a move software should make easier. Headcount at the business dropped from more than 111,000 in 2016 to about 96,500 last year, although the sale of assets was largely responsible. Vodafone, moreover, has previously denied it aims to have a much smaller workforce in future.

Executives admit there is a big challenge ahead. "Anyone who says it is a walk in the park is not being truthful," said Dona. The issue is not just about cost, either. To lure graduates who would normally think of joining either a startup or a Google, Vodafone probably needs a less stodgy image and a better working environment for software experts. It is trying to abandon the age-old habit of promoting talented people into managerial positions and losing their hands-on expertise. A new career path is being designed to offer an alternative form of advancement, said Ahmed El Sayed, Vodafone's head of software engineering for Europe.

Considering the earlier failures in the sector, Vodafone is understandably wary of attaching a revenue target to its plan. "It is difficult to say," responded Dona when asked the question. Investors, though, were unmoved when Vodafone first announced details of the software initiative in October last year. Its share price showed almost no change that day or week.

But meaningful revenue growth is probably impossible without cultural transformation first. "A lot of this is about changing the impression of these companies to make them more attractive to software developers," said Crawshaw. At a BT presentation he recently attended, the operator made a big deal about software innovation led by recent university graduates, including a hospital workflow system developed for the UK's National Health Service. For anyone in software, the future looks bountiful.