"They're great at pointing out flaws, for sure," Mecum said after being presented with two bits of T-Mobile event swag: a flyer comparing that carriers midband coverage on Maui to Verizons lowband 5G here, accompanied by a magnifying glass with a "verwhyzon$ Ultra Wideband Finder" label. "That's their focus, good for them."

But, he countered, just you wait.

"We're going to have 175 million people covered with 60 MHz of lowband C-band [spectrum] by the end of this year," he said (a goal Verizon laid out in March). "And that number ratchets up to 200 million by the first quarter of 2023."

He added that at Qualcomms event, the fastest connectivity is coming from the millimeter-wave (mmWave) network Verizon set up at Grand Wailea for the occasion. "The maximum that people are getting here at the conference is a gigabit on their network," he said of T-Mobiles midband 5G. "We're getting four gigabit," he said and held up a phone showing a previous Speedtest result of 4.03 Gbit/s down and 214 Mbit/s up on Verizon's mmWave network. 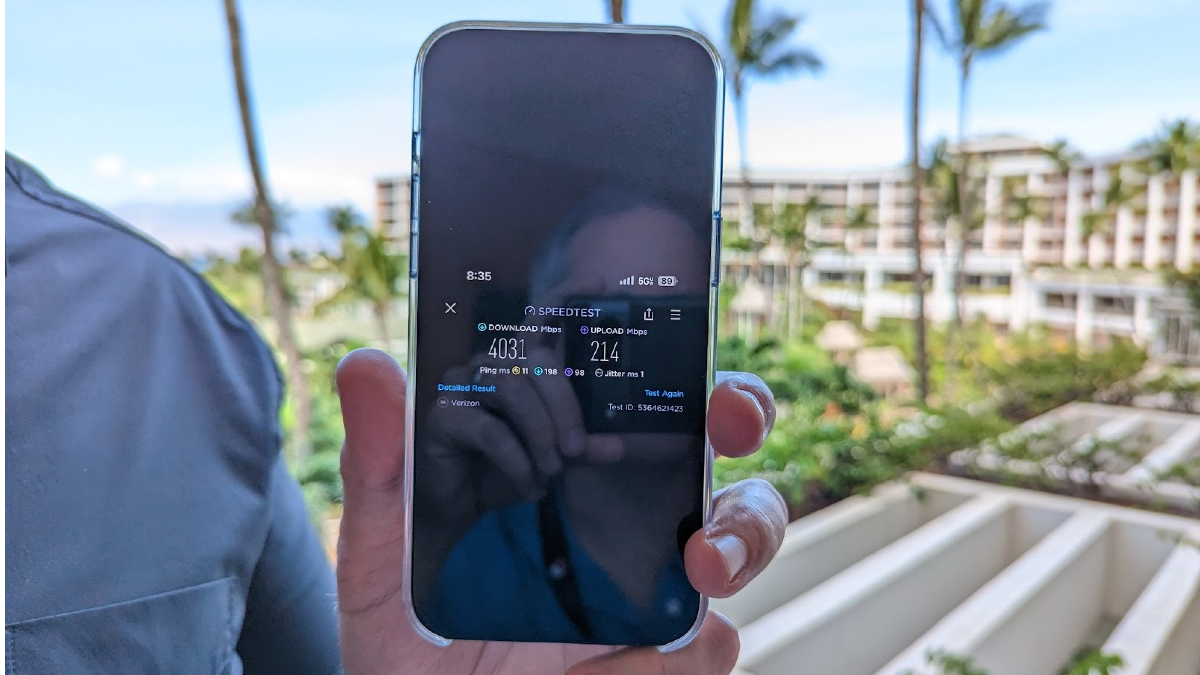 Oh say can you C-band

But outside the grounds of that lavish Waldorf-Astoria resort, Verizon only offers lowband 5G that it sells as "Nationwide 5G," not the mmWave and C-band coverage it markets as "Ultra Wideband 5G." From a look at its coverage map, thats the case throughout Hawaii, even in downtown Honolulu – and, per a March 2020 vote by the Federal Communications Commission, C-band will never come to the islands because they rely too heavily on satellite-hosted telecom services. Thus, C-band spectrum isn't available to any carrier there.

In the rest of the US, however, the C-band spectrum on which Verizon spent $45.5 billion in January of 2021 has already boosted Verizons performance, with an October report from Opensignal finding that the carriers average 5G download speed had climbed from 70.3 Mbit/s in March to 81.4 Mbit/s.

Another C-band hiccup: Complaints from airlines that C-band might interfere with the radar altimeters on planes. That late-breaking controversy forced Verizon and AT&T to pause deploying C-band near many airports.

"It's still ongoing for sure, and we're not allowed to deploy in some airport areas because the FAA is still coming up to speed on how they need to manage their filtering on their devices," Mecum said.

He placed the blame squarely on the Federal Aviation Administration and airlines for using under-performing receivers. The FCC is now moving to address that situation by updating guidelines around receivers. But the airline industry is now asking for some permanent changes to C-band deployments around airports.

"C-band is not harmful to airplanes," Mecum said. "The airplanes need to have better receivers."

C-band at the core, mmWave as a complement

As for the future of mmWave, Mecum emphasized that it would serve as a "complement," using that word at least five times. He acknowledged its range limits – "you can't overcome the laws of physics" – and said C-band relieved Verizon of the need to make mmWave a wider-area fix.

Some mmWave advocates have suggested that deploying cheap, low-power smart repeaters can fill out mmWave coverage, but Mecum did not sound sold on that technology as its next big thing for mmWave.

"We've evaluated it, and there's places and neighborhoods where we're considering doing that for sure," he said, then added "Verizon isn't a single-solution corporation."

Instead, Mecum talked up how mmWave can play a powerful role in high-traffic environments: "environments where there's mass calling – in a stadium or a convention or airports – places where people forget to download their show before they want to watch it on an airplane."

Mecum said mmWaves low latency could open up more possibilities in sports and gaming, citing the carriers work at the Formula 1 Crypto.com Miami Grand Prix in May.

"As a fan, you could watch your driver come by, and if you wanted to see what the driver saw," you could bring that up on your device, he said. "Why? Because we had millimeter wave, and we could serve that capacity to the 100,000 people watching that freaking race."

Verizons fixed-wireless access business has been a standout success for the carrier, which reported an additional 342,000 FWA subscribers in its Q3 earnings, bringing it to 1.06 million total. That service now reaches 30 million households across 900 cities.

Many of those customers have come from cable providers that previously had a broadband monopoly at their homes; Comcast, in turn, has evidently felt threatened enough to run Twitter ads saying Verizon 5G Home speeds "vary throughout the day."

"People just want choice!" Mecum said. "It's a growth vector for us, for sure, and Comcast knows that."

However, Verizon is taking its time with technologies like standalone (SA) 5G and voice over new radio (VoNR). Mecum said Verizon won't launch such offerings until it's dead certain that they wont come at the cost of reliability.

In other words, call quality will have to trump buzzword compliance.

"People will leave you in a hot second if you start messing with their voice," he said. So VoNR will have to wait: "We'll launch it when it's ready."

In the meantime, Verizon may have to accept continued, if more technically-minded trash-talking from T-Mobile.