Verizon will likely launch 5G in Baltimore next

Verizon appears to have constructed an extensive 5G network running in its millimeter-wave (mmWave) spectrum in Baltimore, and could commercially turn the network on in the coming weeks.

Startup Aurora Insight said it discovered the unannounced network while monitoring wireless transmissions in Baltimore. The company operates mobile sensors that can geolocate transmitters in a specific area, which the company said allows it to be able to map out spectrum usage, serviceable coverage and network performance. 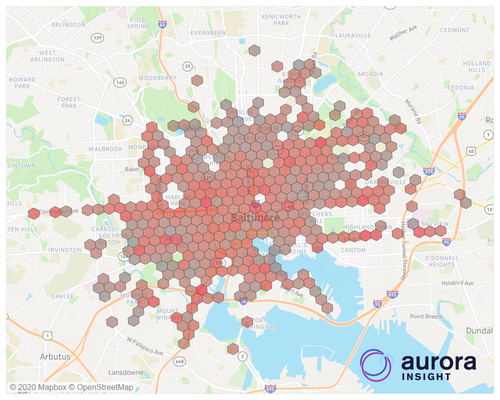 Verizon did not respond directly to questions about whether it will launch 5G service in Baltimore. "It's no mystery that we're aggressively building 5G. We've said we will have 60-plus cities live with our 5G Ultra Wideband service by the end of this year," a Verizon representative told Light Reading.

Verizon offers its mmWave 5G service in roughly 35 cities today, and earlier this year promised to expand that figure to 60 by the end of 2020. The operator has generally launched commercial service in one or two cities at a time  for example, the operator announced it switched on its 5G Home service in parts of Detroit earlier this month.

Thus, it's reasonable to expect Verizon to announce service in Baltimore sometime soon.

Verizon's mmWave 5G service offers blazing-fast speeds. But it is typically restricted to downtown areas because 5G signals in mmWave spectrum can't travel more than a few thousand feet under the best conditions.

However, Verizon is moving toward launching nationwide 5G on its lowband spectrum via Dynamic Spectrum Sharing (DSS) technology. Indeed, the operator recently tested DSS in Texas and Minnesota. But Verizon officials have warned that DSS won't support the kinds of super-fast 5G speeds that mmWave connections can.