Verizon shows off C-band speeds amid battle with airlines

Verizon offered some analysts and media a peak at its planned 5G deployment in C-band spectrum  early test results showed speeds up to 1 Gbit/s  but the carrier's efforts were overshadowed by increasingly heated rhetoric from airline executives.

According to Reuters, United Airlines CEO Scott Kirby this week said Verizon's rollout of 5G in C-band spectrum would represent a "catastrophic failure" of government regulations. He also suggested 5G operations in C-and spectrum could ultimately delay, divert or cancel about 4% of daily flights across the US, affecting thousands of passengers.

Verizon officials, meanwhile, maintained a positive attitude on the topic this week during their C-band media event in Los Angeles. "I could not be happier with the combination we have of low-, mid- and C-band spectrum," Verizon's Adam Koeppe told reporters who attended Verizon's event, according to Tom's Guide.

Cursory tests of a Verizon C-band network in downtown LA by Tom's Guide and Cnet showed connection speeds up to 1 Gbit/s across relatively wide areas and inside buildings. However, the operator's network in the city is not yet available commercially and therefore flush with excess capacity, and Verizon provided the outlets with Samsung phones for the limited testing.

Nonetheless, it's clear that Verizon is building out its C-band spectrum in markets across the country. For example, according to a new report from research and consulting firm Signals Research Group, Verizon already operates dozens of C-band transmission sites in Las Vegas. The operator has said it hopes to cover up to 100 million people with C-band connections by March.

But Verizon's C-band deployment plans, and those from AT&T, have been called into question by some in the airline industry. A large number of airline officials argue that 5G operations in newly released C-band spectrum will interfere with some aircraft radio altimeters. Indeed, United Airlines' Kirby suggested the company would not be able to use radio altimeters at around 40 of the largest airports in the country. And that, he said, would imperil landings in bad weather, cloud cover or heavy smog where visual landings are not possible.

"It is a certainty. This is not a debate," he said. 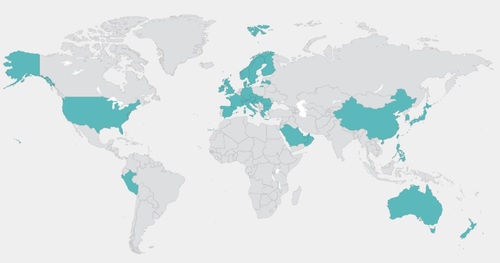 CTIA argues that roughly 40 countries around the world have approved 5G in C-band spectrum with no impacts to the aviation industry.
(Source: CTIA)

Officials in the wireless industry believe it is a debate. "5G networks using a set of radio waves called 'C-band spectrum' operate safely and without causing harmful interference to aviation equipment," wireless industry trade group CTIA wrote on an advocacy website for the issue.

"If United is looking for someone to blame for their cancelled flights," WIA CEO Jonathan Adelstein told Inside Towers, "they'll have to look elsewhere than the wireless industry. The ability of 5G to operate safely in the C-band is already confirmed by real-world experience around the globe. If wireless was a legitimate reason, he'd already be cancelling all United flights to Europe where they use the same frequencies."

Even so, Verizon and AT&T have agreed to C-band deployment delays and modifications due to airline industry fears.

The real problem, according to some wireless technology experts, is government mismanagement, particularly by the Federal Aviation Administration (FAA). "The FAA knew 5G was coming and should have been working on altimeter upgrades at least 2, if not more than 5, years ago. But the FAA, like several other agencies, feels that it has veto power over national spectrum issues to protect its regulated companies from unwanted burdens," said Michael Marcus in comments to Forbes. Marcus is a former FCC official who is now an adjunct professor of electrical and computer engineering at Northeastern University.

Marcus added that the NTIA "has not been able to uphold its statutory responsibilities ... which is to lead federal spectrum efforts."