Verizon said it will launch 5G services on its midband C-band spectrum licenses sometime this month, covering roughly 100 million people in 1,700-plus cities around the nation. That's earlier than the operator's previous promises to launch C-band services in March.

Verizon's announcement comes just hours after President Biden voiced support for an agreement between the wireless industry and the airline industry for a two-week C-band launch delay. That delay is intended to provide engineers time to test the effects of commercial 5G operations in C-band spectrum on aircraft radio altimeters.

In its announcement, Verizon also said its 5G customers can expect "typical download speeds" of 90-170 Mbit/s and "peaks" over 1 Gbit/s "in certain areas." The company said typical upload speeds will range from 15 Mbit/s to 30 Mbit/s with peaks of over 100 Mbit/s.

PCMag reported those speeds would also be available through other Verizon brands like Visible and Verizon MVNO partners like US Mobile. Devices including new iPhones and Samsung phones can access C-band spectrum.

Verizon also said customers on its most expensive unlimited data plan will now no longer be subject to data-usage limits. Verizon is joining both T-Mobile and AT&T in removing caps from its high-speed data allotments. T-Mobile kicked off the trend in February last year when it unveiled its Magenta Max data plan, which does not include any usage-based data limits, at least for data that is consumed on its customers' phones. AT&T joined T-Mobile with a similar offering in July.

Now, as part of its C-band launch, Verizon too has removed the high-speed data allotments on its "5G Get More" unlimited data plan. Previously, the company warned customers on that plan that "in times of congestion, your smartphone and mobile hotspot data may be temporarily slower than other traffic" after consuming 50 GB during a month. Now it is promising "unlimited premium data" as well as 50 GB per month of hotspot data.

Verizon's last bit of C-band news involves the company's fixed wireless access offering, 5G Home. The company said customers on its 5G Get More unlimited data plan can get 50% off its fixed wireless Internet service. The company also said that it now will offer two fixed wireless Internet service plans: 5G Home and 5G Home Plus. The first costs $50 per month and includes a two-year price guarantee, while the second, Plus plan costs $70 per month and includes a three-year price guarantee and cloud storage services.

Early last year, Verizon agreed to spend roughly $50 billion on C-band spectrum licenses as part of an FCC auction. The operator subsequently said it would spend an additional $10 billion over three years to construct a network that would make use of that spectrum. Verizon's C-band launch has been clouded by concerns in the aviation sector that 5G operations in C-band spectrum might interfere with aircraft radio altimeters. However, President Biden suggested those issues would be addressed this month.

As part of its efforts to promote the pending launch of its C-band network, Verizon released a short video featuring actors Elizabeth Banks (from "The Hunger Games"), Terry Crews (from "Brooklyn Nine-Nine") and Ming-Na Wen (from "The Book of Boba Fett"). The video seeks to highlight the types of games and services that Verizon's speedy new C-band network might support. 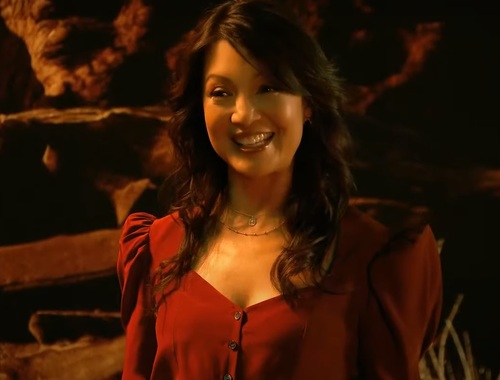 Ming-Na Wen is one of the high-profile actors featured in Verizon's C-band promotional video.
(Source: Verizon)