A wide range of analysts and industry observers anticipate that Verizon will spend heavily on 3.5GHz CBRS licenses during the FCC's spectrum auction next month.

"I expect Verizon to participate because they could use some midband spectrum," said analyst Peter Rysavy of Rysavy Research.

And how much spectrum will Verizon purchase? "A lot," estimated analyst Roger Entner of Recon Analytics. Indeed, as Light Reading reported roughly a year ago, Verizon has been adding CBRS transmitters to its cell sites for months.

"They have already deployed thousands of antennas that support 3.5GHz and now will light up that spectrum as an added capacity layer," explained analyst Chris Nicoll with ACG Research.

"I expect Verizon to be an active bidder ... It will try to get as much as it can," predicted analyst Kyung Mun of research firm Mobile Experts, noting that FCC rules prohibit any one CBRS auction bidder from buying more than 40MHz in any one location. "As for how much it would be spending for licenses, that would depend on markets, of course."

Meaning, Verizon might need to dole out big bucks for a license that covers New York City, considering a range of other companies like Charter Communications or T-Mobile might also want that license. But a license covering a small town  Socorro, New Mexico, for example  probably won't generate as much interest.

Hurting for more midband spectrum
The appeal of the 3.5GHz CBRS band to Verizon is directly tied to its spectrum position relative to its rivals. Verizon is the largest wireless network operator in the US in terms of the size of its customer base, but it's dead last in terms of midband and lowband spectrum ownership. 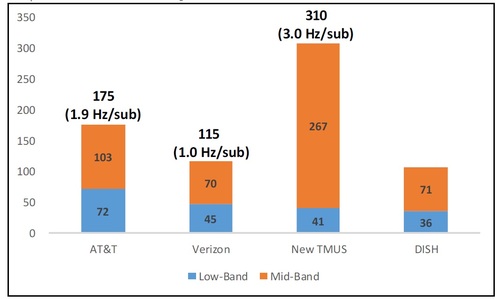 Thus, the only real question is just how big Verizon might go. "It's going to be interesting," said Jennifer McCarthy, the VP of legal for Federated Wireless, one of a handful of companies managing the Spectrum Access Systems (SASs) that regulate usage of the CBRS band. Verizon said last year it is working with SAS vendors Google and Federated Wireless on its initial CBRS deployments.

"Maybe that's a decision they make in the middle of the auction?" she added.

A unique auction
The FCC's CBRS auction, scheduled to start July 23, represents a first-in-the-world implementation of real-time spectrum sharing between commercial and government users. Specifically, thanks to a network of monitoring stations along the US East and West Coasts, the US Navy can use the CBRS band any time it wants to by kicking everyone else off the band  but if it's not using the band, everyone else gets to use it. And in the vast interior portion of the country, the full 150MHz of the band is available for mostly unfettered commercial uses.

The full CBRS band was opened up last year for unlicensed uses, dubbed GAA (General Authorized Access). Verizon could potentially use the CBRS band as an unlicensed GAA user; in fact, it already makes use of the 5GHz unlicensed band with License Assisted Access (LAA) technology for additional network capacity. However, the FCC's CBRS auction next month will set aside half the band, roughly 70MHz, for licensed uses (dubbed Priority Access Licenses, or PAL). Licensed CBRS spectrum users will not have to share their spectrum with any other commercial user  thus, if Verizon buys the maximum of 40MHz of CBRS PAL spectrum in New York City at auction, it will not have to share that spectrum with Charter Communications or any other GAA user.

And, due to the SAS running in the CBRS band, if Verizon doesn't use the 40MHz license it purchases for NYC, that spectrum can revert back to GAA users. This represents a dramatically different approach to standard spectrum licensing practices around the world, which until now have been an all-or-nothing game between licensed and unlicensed usage.

Coverage caveats in the 3.5GHz band
Although CBRS spectrum is certainly useful, it's not the same as the 600MHz band or the C-band. "CBRS will not be a 'be all end all' solution for national carriers," wrote the Cowen analysts. "For example, the spectrum is not ideal for base-layer nationwide 5G 'coverage' spectrum."

This is partly due to the power output restrictions on the band, which limit the range that signals can travel down to a mile or two in urban areas. As a result, there's some debate about whether CBRS networks will mainly be indoors or whether they will head outside.

"CBRS, I think, is primarily going to be mostly an in-building phenomena, but we are having some conversations with not only traditional wireless providers, but also cable companies about macro installations," said Jeffrey Stoops of tower company SBA Communications during a recent quarterly conference call with investors, according to a Seeking Alpha transcript of his remarks.

Others see it differently. For example, Federated Wireless said the majority of its CBRS deployments are outside. The company's opinion here is worth noting considering its SAS accounts for fully 60% of all live CBRS transmitters today.

Other vendors are also boasting of outdoor deployments. Cambium Networks said an unnamed "tier 1 oil and gas company" selected its equipment for a CBRS installation across North American oil fields.

Nonetheless, the power output issue is such that the Wall Street analysts at Cowen estimate that the 70MHz up for grabs in the CBRS auction will generate total proceeds of just $3 billion to $4 billion. The upcoming C-band auction, on the other hand, is expected to generate $43 billion in total proceeds thanks to the massive amount of spectrum up for grabs in that auction (280MHz) coupled with its favorable power levels.

The CBRS auction could raise up to $4 billion in total bids. Click here for a larger version of this image.
(Source: Cowen)

Partly due to these caveats, many expect CBRS users to range from wireless Internet service providers to enterprises to hotels to campus network operators. Operations in the band could include anything from IoT applications to employee communications.

CBRS competition
Whether indoor or outdoor, plenty of companies, universities and others are interested in the CBRS band. Roughly 350 entities have registered their intention to bid in the FCC's July CBRS auction, far more than in most FCC auctions.

Cable companies like Comcast and Charter are seen as keenly interested in the CBRS band as a way to bolster their burgeoning mobile efforts. "They could use it in targeted areas to reduce the amount of mobile traffic their mobile customers send to the wholesale provider, hence reducing the wholesale cost of providing mobile service," wrote the analysts at Evercore. "Given the county-by-county licenses, cable operators have the opportunity to purchase just spectrum in their coverage areas, or even subsets of their coverage areas."

But the analysts added that few "dark horse" bidders showed up to bid in the auction, such as Google, Amazon or UPS. "That could mean they aren't interested, or that they're comfortable relying on the unlicensed GAA portion of the band, and don't see a need to pursue purchasing PALs," the analysts wrote.

Momentum in the CBRS ecosystem
One other unique element affecting the CBRS auction is the impressive amount of momentum around the band.

And even though the band opened up for commercial use just last year, there are already 25,000 registered Citizens Broadband Radio Service Devices (CBSDs) working in the band across the country today.

C-band for the holidays
If the CBRS band is Verizon's summertime snack, the C-band ought to be its holiday feast.

"Of course, it [Verizon], along with peers, will keep its cash powder dry for the C-band auction in December," said Mobile Experts' Kyung. "Since its balance sheet is in better shape than AT&T for example, I expect Verizon to be aggressive in both auctions this year."

The C-band auction, scheduled to start in December, is currently structured so that 100MHz of the band will be released by December 2021, with the remaining 180MHz to be released by December 2023. And part of the reason Verizon executives might be salivating at the prospect of a C-band auction so publicly is that the FCC decided not to put any firm limits on the amount of C-band spectrum any one operator can buy.