That delay, they explained, would give federal regulators more time to figure out whether 5G operations in C-band spectrum might affect aircraft radio altimeters.

But in a letter issued Sunday (January 2), Verizon and AT&T said they will not delay their launch, currently scheduled for Wednesday (January 5).

"Agreeing to your proposal would not only be an unprecedented and unwarranted circumvention of the due process and checks and balances carefully crafted in the structure of our democracy, but an irresponsible abdication of the operating control required to deploy world-class and globally competitive communications networks that are every bit as essential to our country's economic vitality, public safety and national interests as the airline industry," AT&T CEO John Stankey and Verizon CEO Hans Vestberg responded in the letter, which was published by The Wall Street Journal.

Instead, the two companies issued a counterproposal: An increase in the size of the "exclusion zones" they'll operate around airports. AT&T and Verizon promised that, for the next six months, they'll avoid 5G operations in C-band spectrum near major US airports using the same technical parameters that are already being used in France.

"US aircraft currently fly in and out of France every day with thousands of US passengers and with the full approval of the FAA [Federal Aviation Administration]. As a result, France provides a real-world example of an operating environment where 5G and aviation safety already coexist," Vestberg and Stankey wrote. "The laws of physics are the same in the United States and France. If US airlines are permitted to operate flights every day in France, then the same operating conditions should allow them to do so in the United States." 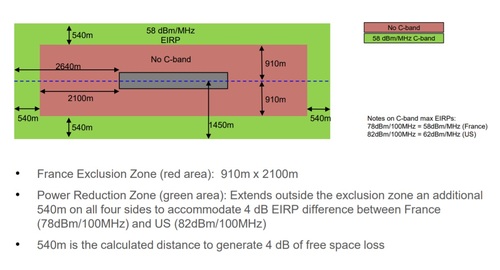 Verizon and AT&T said they would impose the same "exclusion zones" around airports in the US that are already used in France.
Click here for a larger version of this image.
(Source: AT&T and Verizon)

According to the WSJ, the FAA is reviewing the wireless companies' latest proposal. "US aviation safety standards will guide our next actions," the agency said.

However, some airline representatives expressed exasperation about the 11th-hour negotiations between the airline industry and the wireless industry. According to Reuters, Sara Nelson, president of the Association of Flight Attendants-CWA (AFA) union that represents 50,000 workers at 17 airlines, said: "What do they think ... we're raising these issues over the holidays for kicks?"

It's worth noting that thousands of flights have been canceled in recent days due to issues surrounding COVID-19.

But the CEOs of AT&T and Verizon argued that the airline industry has already had plenty of time to figure out whether 5G operations in C-band spectrum might interfere with aircraft radio altimeters, which are used for landings in low-visibility conditions.

"The auction of the C-band spectrum was the culmination of years of study by the Federal Communications Commission, which is the expert agency of the US government on spectrum," they argued. "Inexplicably, the FAA and the aviation industry apparently did nothing following the February 2020 order [by the FCC for a C-band auction] or even after the C-band auction closed in January 2021. In fact, it was not until November 2, 2021 that the FAA even issued a notice to begin collecting data about altimeters from the aviation industry."

How exactly the issue will be resolved remains to be seen.