The Wall Street analysts at Deutsche Bank Research believe that US wireless network operators are set to significantly increase spending on their networks in the coming years.

Specifically, the analysts wrote in a recent note to investors that they expect wireless carriers  including T-Mobile, Verizon and Dish Network  to collectively spend $35 billion on capital expenditures (capex) in 2021, a figure they said will rise by 6% to $37 billion by 2022. 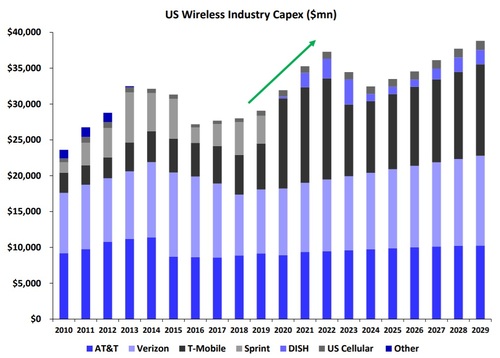 "The last time industry capex grew this fast was in 2013, amidst broader LTE rollouts," the analysts wrote.

The analysts attributed their expectations to spending by two companies: T-Mobile and Dish Network. T-Mobile has loudly discussed its plans to spend up to $60 billion over the next five years on the construction of a nationwide 5G network using, in part, Sprint's 2.5GHz spectrum. Dish, meanwhile, has said it plans to enter the wireless industry first as a T-Mobile MVNO and, later, as a 5G network operator via a $10 billion network buildout program.

The Deutsche Bank Research analysts said that other factors could add further momentum to operators' capex. For example, they said that Verizon and AT&T could purchase 3.5GHz CBRS spectrum or C-band spectrum, and increase their spending to construct networks using that spectrum. Or the US government could allocate more money for 5G networks in urban or rural areas. However, they noted such developments are not currently a part of their forecasts.

An increase in network spending by the big American wireless network operators would likely come as welcome news to cell tower companies like SBA Communications and American Tower, as well as wireless network equipment vendors like Nokia and Ericsson.

A global viewpoint
The US predictions from Deutsche Bank largely dovetail with global forecasts by Dell'Oro Group, an analyst firm widely cited by wireless network equipment vendors. The firm recently projected that worldwide telecom capex would grow at a 1% compound annual growth rate between 2019 and 2022.

Of course, a growing portion of that spending is aimed at 5G. Dell'Oro noted that the overall market for radio access network (RAN) equipment  which includes everything from 2G to 5G  has advanced during six of the last seven quarters, and that it would continue to grow in the coming years.

However, Dell'Oro analyst Stefan Pongratz this week noted that the firm's global RAN forecast could be affected by continued sanctions against China's Huawei (the world's largest wireless equipment supplier), as well as the widening economic effects of the COVID-19 pandemic.

"Even though 1Q20 RAN market conditions were for the most part positive as healthy end-user fundamentals and positive 5G momentum outweighed downward risks associated with the COVID-19 pandemic, we do need to keep in mind the historical relationship between GDP [gross domestic product] and RAN," Pongratz wrote, noting that the firm's pandemic assumptions remain fairly unchanged.

"Given the coupling between RAN and GDP growth when there are significant changes to the GDP growth rates, our assessment holds that a responsible forecast should consider some increased downward risks to factor in the higher likelihood that operators respond with capex reduction measures."

Whether a pandemic-related recession will affect US operators' capex remains to be seen.