US earns participation medal in the race to 5G

If there is a global race to 5G  as President Trump continues to proclaim  then the only award that the US can firmly claim is a participation medal.

Meaning, there's plenty of noise around 5G in the US, but so far there are no clear indications that the country is anywhere near the winner's podium.

Of course, races are defined by the details of the course and the rules governing the competition, and in the much-ballyhooed race to 5G, both are clear as mud.

Either sluggish or spotty
The most obvious way to measure the race to 5G is through network download speeds and coverage areas. And in this respect, each of the big US carriers gets to claim a victory.

For example, AT&T won Global Wireless Solutions' (GWS) "best network" award for overall performance. Meanwhile, Verizon Wireless had Ookla's fastest second quarter network speed of 870 Mbit/s. And T-Mobile offers 5G to the widest number of US customers, according to new PCMag findings, with 54% of customers able to grab its signal.

But top-line numbers can be deceiving. PCMag's Sascha Segan wrote that 5G in the US is a mixed bag. "AT&T 5G right now appears to be essentially worthless. T-Mobile 5G can be a big boost over 4G, but its speeds are only what we'd expect from a good 4G network  it isn't a new experience. Verizon's 5G is often mind-blowing, but very difficult to find," he wrote.

And how do US operators stack up against their international neighbors? Not well, Segan found. "It's worth mentioning that neither AT&T's nor T-Mobile's 5G networks are faster than the Bell and Telus 4G networks in Canada. Bell and Telus were able to outpace our 5G technologies without a lick of 5G."

Indeed, in terms of how the US as a country stacks up in the global 5G race, OpenSignal reports that it's either dead last or in the middle of the pack, depending on how you want to tabulate things. 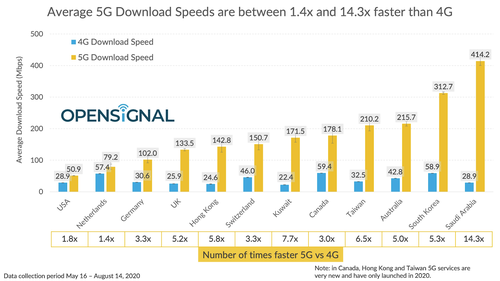 OpenSignal found that, overall, the difference between 4G and 5G in the US is marginal at best. Click here for a larger version of this image.
(Source: OpenSignal) 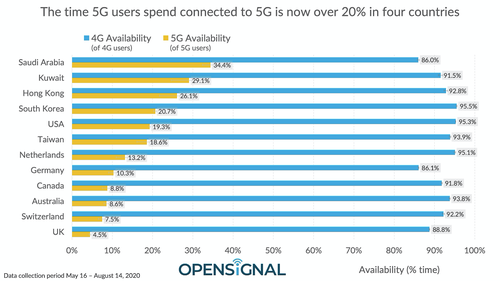 Largely thanks to lowband 5G services from AT&T and T-Mobile, the US ranks in the middle of the pack when it comes to 5G coverage. Click here for a larger version of this image.
(Source: OpenSignal)

US officials, however, continue to point out that things ought to improve quickly. The C-band auction  which is to release valuable midband spectrum later this year  should significantly improve the situation. That conclusion certainly is borne out in countries like South Korea and Saudi Arabia that moved quickly to release midband spectrum for 5G, as Tutela Technologies noted in a report.

Moreover, the FCC is working to release another 100MHz chunk of midband spectrum for 5G following an agreement between The White House and the Department of Defense.

The geopolitics of the race
Although speed testers and Excel pilots are able to spill plenty of ink on the rollout of 5G in countries around the world, there are really only two direct competitors on the global geopolitical stage: the US and China.

And the results from that race are much more difficult to quantify.

American officials are pushing forward with funding for open RAN technology in the hopes that it will entice more vendors into the industry  vendors that are not named Huawei. They're also working to rally countries like Israel and India to their side.

And on the public-relations front, the US government recently set up a "clean networks" initiative that is now forcing global operators to seek out an American seal of approval.

But the Chinese aren't standing still. As reported by The Wall Street Journal, China launched its new "Global Initiative on Data Security" that calls on allies to handle data security in a "comprehensive, objective and evidence-based manner."

And though the new Chinese initiative doesn't mention the US State Department's "clean networks" program specifically, Chinese Foreign Minister Wang Yi said that "a certain country keeps making groundless accusations against others in the name of 'clean' network and used security as a pretext to prey on enterprises of other countries who have a competitive edge."

He added: "Such blatant acts of bullying must be opposed and rejected."

This funding positions CBN to join China Mobile, China Telecom and China Unicom in providing 5G services in the country. The US, meanwhile, just this year reduced the number of its own 5G competitors from four to three following the merger of T-Mobile and Sprint. (Whether Dish Network replaces Sprint as a fourth nationwide provider in the US remains to be seen.)

5G nationalism
The jockeying between the US and China is clearly having an effect on the development of 5G specifically and other next-generation technologies in general in other countries around the world.

Specifically, some are beginning to circle the wagons over the increasingly tangible fear that 5G and other high-tech issues will become international bargaining chips, technologically bifurcating the global market.

For example, Japan's Rakuten is touting its efforts to develop a domestic 5G platform with vendor NEC that can be exported internationally.

And India's Jio Platforms is investing in the creation of its own domestic 5G ecosystem, complete with equipment and service suppliers.

Even Finland is publicly shoring up its position against the rapacious Trump administration. As reported by Bloomberg, the Finish government's equity-asset manager Solidium recently raised its ownership in Finnish equipment supplier Nokia to around 5% in an explicit block against the Trump administration's stated interest in acquiring a 5G hardware vendor.

Solidium's stock purchases "act as a counter balance" to the US and "show [US Attorney General] William Barr and his European colleagues that the situation is under control," Solidium CEO Antti Makinen said, according to Bloomberg.

He continued: "From a European perspective, it's important that Europe has 5G technology. But Europe isn't an entity who could buy shares ... For the Finnish state, it boils down to this: It's one of the most  if not the most  important company in Finland and keeping it Finnish has value to us."

Thus, it's clear that the US is participating in a race of some kind in 5G. But whether everyone is running toward the same finish line is apparently a matter of some debate.