Fitting their general stance to mobile subscriber acquisition strategies, US cable operators largely avoided the launch of super-aggressive Black Friday promotions, according to an analysis from MoffettNathanson.

The small exception was Comcast, which launched its Xfinity Mobile service in the spring of 2017 and ended Q3 2021 with about 3.66 million mobile lines.

Comcast, "appeared to join the fray" with a Black Friday promotion to switchers with an ad declaring to offer "Up to $1,000 off!," Craig Moffett, analyst with MoffettNathanson, explained in a report that sized up the relative aggressiveness of this year's Black Friday promos from the nation's major incumbent mobile service operators – AT&T, Verizon and T-Mobile. 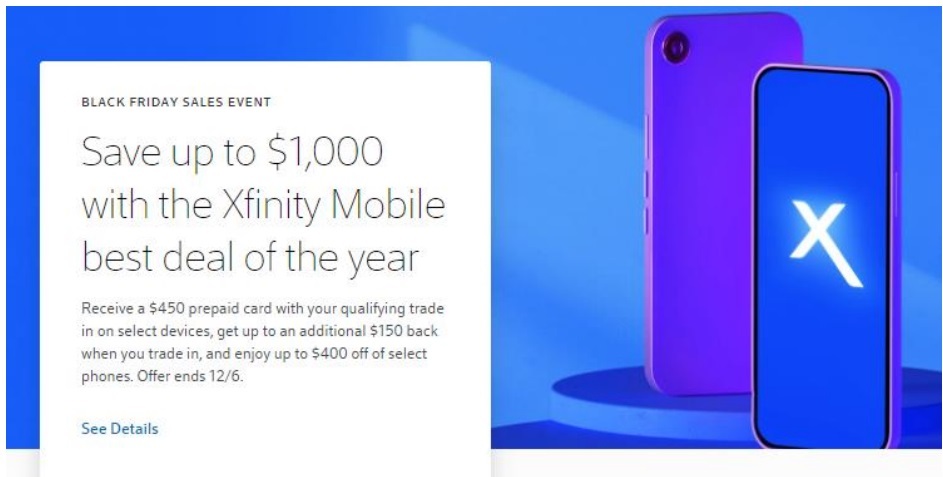 "Comcast announced a seemingly aggressive promotion, but the fine print reveals that it is far less aggressive than meets the eye," and does not appear to be super-threatening to the incumbents, Moffett explained. He noted that the promo's details show that Comcast's most valuable offer is only available for the iPhone SE 64GB model.

The components of Comcast's $1,000 promo consist of a pre-paid card (up to $450) with an eligible trade-in and purchase of an eligible phone from Xfinity Mobile, up to $399 off an eligible iPhone SE 64GB with new line port-in from another carrier and a 24-month EIP (equipment installation plan) agreement, and up to $150 for an eligible phone trade-in that is in working condition (accepted by Assurant).

Comcast's Black Friday action notwithstanding, US cable operators, including Charter Communications and Altice USA, have largely avoided the kind of promotional activity seen by the mobile incumbents, opting instead to focus on bring-you-own-device customers, Moffett noted.

So far, that stance has not prevented US cable operators from attracting mobile customers using a bundling strategy led by their respective home broadband services.

Charter, which introduced its own set of family plans to its mobile mix last month, added 244,000 mobile lines in Q3 2021, for a grand total of 3.18 million. Altice USA added just 1,000 mobile lines in Q3, but is in the process of revamping product packaging and pricing for its recently rebranded Optimum Mobile offering.

"We continue to believe that Comcast and Charter will eventually have to start subsidizing phones. But this isn't it, yet," Moffett wrote.

However, consumers probably should not hold their breath for any major promotional activity. Chris Winfrey, the former Charter CFO who was recently upped to COO, said back in January that the operator would likely avoid heavy smartphone subsidies to accelerate growth. But he did leave the door open a smidge.

"We think there's so much in the mobile and broadband combined offer that there's not a need to go subsidize the handsets," Winfrey said. "Does that mean over time that could evolve? It could, given the value we create through that customer relationship, but it's not a focus for us. We don't think that in and of itself is a great business model."