TIM struggles as countrymen refuse to lend it their ears

Telecom Italia (TIM) could do with a Ciceronian lesson in using oratory to win followers.

Back in 2017, the Italian telecom champ provided a mobile service to more than 23.3 million people. Since then, numerous friends, Romans and countrymen have not been lending it their ears, as a famous Italian once almost said.

Some four million customers have either switched sides or reverted to comms by carrier pigeon.

This was clearly not in the strategic plan when TIM splurged 2.4 billion (US$2.8 billion) on 5G licenses in 2018, and it has been thwarting other attempts at recovery.

To recap, these include slashing headcount by a fifth, or 13,500 jobs, since 2015; selling assets, including a chunk of the Italian fixed-line business; parking mobile towers in a joint venture with Vodafone; and becoming a vassal of Google in the cloud.

The company's headline message about its just-published results for this year's second quarter is that growth is no longer in hiding.

But the year-on-year sales improvement of 1%, nudging revenues up to about 3.8 billion ($4.5 billion), was entirely down to the fast-growing but relatively small Brazilian unit. 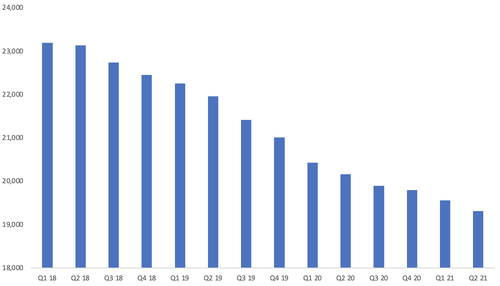 Nor do other group metrics convey the image of a telco in excellent health. Basic earnings fell nearly 6%, to 1.6 billion ($1.9 billion), largely because of staff and restructuring costs (layoffs carry an initial price).

There were a few pinpricks of light in the murk. Net debt, a heavy burden for many of Europe's operators, has fallen by nearly 1.3 billion ($1.5 billion) since the end of last year, to roughly 22 billion ($26 billion).

After leases, it equals about 2.7 times what TIM makes in basic earnings each year  not great, but not as bad as the ratio would have been had debts stayed the same.

It had already pocketed 1.6 billion ($1.9 billion) from the sale of shares in Inwit, the towers joint venture it runs with Vodafone. But chipping away at net debt will grow harder as TIM runs low on assets to sell.

A possible next candidate for partial divestment is Noovle, the cloud business it operates in partnership with Google. Investors would probably be attracted to a unit performing better than TIM's main business.

Meanwhile, TIM is losing control. After all its tower moves, it can no longer take decisions about the hat stands for its mobile equipment without consulting Vodafone.

What if their strategies diverge in future? Its ownership of the Italian fixed-line business has been weakened, too, even if TIM still holds a majority stake for now.

The sick man of Europe

Investors should be willing to accept these divestments only if they are accompanied by a performance improvement. Lopping off body parts is futile if the gangrene continues to spread.

Yet some of TIM's most critical businesses still look sick. The worst, by far, is Italian mobile.

Problems started in 2018 with the invasion of Italy by Iliad, a French company that had secured a license and assets when regulators waved through a merger between Three and Wind, two other Italian operators.

Wounded by Iliad's cut-price offers, TIM has never quite staunched the bleeding. After customer defections in the April-to-June period, like-for-like mobile service revenues dropped 7.1%, to 783 million ($924 million), compared with the year-earlier quarter.

The shock is that sales have dropped despite the rollout in some major urban markets of 5G, a hyped mobile technology on which TIM has already spent billions.

Even in a competitive market, companies should be able to grow their revenues if a new service is genuinely exciting. The erosion of TIM's suggests few customers are interested or prepared to spend more for a 5G upgrade.

TIM may have to hope for a warmer reception in the business sector, where operators desperately want 5G to unlock new service opportunities.

Service revenues were also down at the much larger fixed-line business, dropping 2.3%, to around 2.2 billion ($2.6 billion), compared with the year-earlier quarter.

For growth, TIM seems to be counting on new ventures such as Noovle. That made about 500 million ($590 million) in revenues last year and CEO Luigi Gubitosi reckons this amount can be doubled by 2024.

But an extra 500 million is only 3% of last year's sales. TV tie-ups with DAZN and other online video companies might fuel adoption of higher-speed broadband packages and persuade customers to spend more. The downside is the investment needed in full-fiber lines.

TIM's domestic unit flung nearly 1.5 billion ($1.8 billion) at capital expenditure in the first six months of the year, a third more than it spent in the same part of 2020.

And TIM now reckons between 3 billion ($3.5 billion) and 3.1 billion ($3.7 billion) will be needed annually for Italy alone.

Shareholders seem to like the sound of these projects, sending TIM's share price up 1.7% during early-afternoon trading in Milan. But TIM's collapse in value has been epic over the last 20 years.

Recent months have brought fresh disappointment. In May, reports surfaced that Italy's government will not accept a hoped-for merger between FiberCop and Open Fiber  a state-backed broadband operator  that leaves Telecom Italia with the controlling stake it desires.

There has been no substantive update on that subject since then. But the viability or not of this single network plan has massive implications for TIM's well-being.

In the absence of a thriving 5G business, it needs all the fixed-line fortune it can get.