Those pestiferous men and their 5G machines

The claim that 5G spreads coronavirus is, as this website has repeatedly argued, as birdbrained as the belief that alien autopsies are routinely performed near a salt flat in Nevada and hushed up under a decades-old government conspiracy. It's considerably more dangerous, though. About as dangerous as the suggestion that shooting up with Dettol can rid you of COVID-19.

In The Walking Dead, a long-running TV show about a zombie apocalypse, other people eventually become a much bigger threat than the infection that bred the zombies, which are so weak and slow-moving that even a one-legged octogenarian could out-hop them. A similar thing is happening with coronavirus. As the current occupant of the White House prescribes an intravenous dose of disinfectant as a cure, thugs in the UK are targeting network technicians and their supposedly pestilential masts. 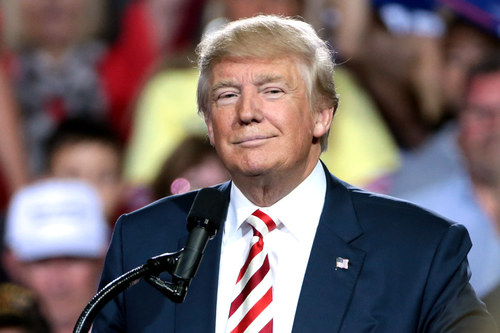 Ignore anything the man pictured above says about coronavirus cures.

One technician who spoke with the BBC was told he would be stabbed or shot if he carried on putting up "death towers." Another, installing communications equipment for hospitals, had his truck keyed by one of the 5G-opposing vigilantes. Turns out he wasn't even installing 5G equipment, but why let such minor details get in the way of some good old-fashioned criminality?

Society now risks alienating the workers on whom it depends. Supermarket staff have been spat on by angry shoppers fighting over toilet roll. Subjected to similar abuses, nurses have also been shouted at and called "disease spreaders" on their way to save lives. Engineers responsible for critical communications are seemingly the latest victims. It's like asking a man to fight your war and then pissing in his canteen.

Funnily enough, recruiting scientists to explain why 5G does not cause coronavirus has not halted the mast attacks, which have now spread from Europe to the US. This campaign against misinformation always looked futile and pointless. Conspiracy theorists would not be conspiracy theorists if they listened to reason, and the view that JFK died at the hands of sinister government or criminal forces would have disappeared in the 1960s.

Trying scientifically to construct an argument, technical types have also stumbled. How do you reason with someone who can't even tell the difference between biology and physics? In the absence of anything meaningful to say, comms experts have reached for pre-packaged arguments designed to show why 5G is not carcinogenic. With zero link established between cancer and COVID-19, that shoves a colossal non sequitur into what was already a daft debate.

Yet daft debates are becoming de rigueur. Today, doctors in the US will have to waste precious time explaining why a shot of disinfectant, administered by hypodermic syringe, is not advisable. Iranian medical experts faced a similar dilemma after word spread that glugging pure alcohol would cure COVID-19. Despite their efforts, hundreds of Iranians have continued to die as a result of alcohol poisoning, and thousands have been hospitalized.

Like the virus, the madness about plague-ridden 5G equipment could spread faster than authorities can deal with it. In the UK, the Communication Workers Union has reportedly taken up the issue. If technicians fearing violence refuse to work on 5G projects, the rollout of the new technology could stall. There is already concern that COVID-19 will hinder 5G deployment in Europe, as spectrum auctions are postponed and investments are delayed. No one could have imagined that a conspiracy theory would be a risk.

Worse than all this, perhaps, is the danger to communications services more generally. Most people don't use 5G, and UK operators have not yet deployed much 5G equipment. By contrast, nearly everyone has a 4G phone, and these devices have become critical tools for key workers and others during the economic lockdown. Vandals who blame 5G for COVID-19 probably can't tell if they're attacking a 5G site or a 4G one, and towers may often support both technologies. If the industry remains intent on reasoning with these miscreants, perhaps it should start by educating them on the difference.