The wireless bubble could start to deflate next year

The US wireless industry has been on a roll during the past year or so.

Specifically, the number of new postpaid customers accumulated by the nation's top wireless network operators has been far above historical norms. According to analyst Roger Entner with Recon Analytics, the US population generally increases by about 2 million people a year. However, during 2020, the nation's big wireless network operators collectively recorded almost 5 million new wireless customers.

During 2021, he predicts that number ought to reach almost 10 million new customers.

Other firms have reported similar increases in the rate of new customer additions among AT&T, Verizon and T-Mobile. For example, the financial analysts at Morgan Stanley noted this summer that the US wireless industry collected a total of more than 7 million new postpaid phone customers during the past 12 months  a result they said "defies predictions."

The financial analysts at MoffettNathanson have acknowledged the situation in a number of reports. Recently they called it a "remarkable pace" and warned that some executives in the industry believe the overall rate of new customer growth in the US is "too high." 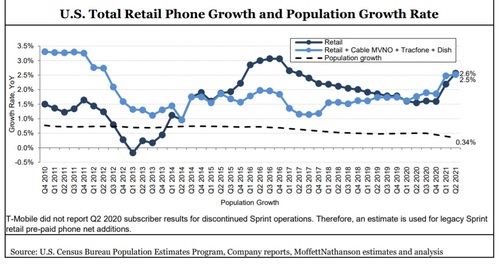 In a recent note to investors, the analysts at MoffettNathanson point to a noteworthy increase in the number of new wireless customers among the nation's big wireless network operators during 2021. Click here for a larger version of this image.
(Source: MoffettNathanson)

Looking for a reason

Industry executives have offered a variety of factors driving the gains. Some have said it's mainly due to the migration of prepaid customers onto postpaid plans, while others suggest it's due to an increase in government subsidies for telecom services. Still others argue it's because younger and younger children are getting phones, but some think it's mostly due to business users signing up for two lines of service (one personal, one professional).

What's noteworthy, though, is that Wall Street investors don't seem very pleased by the results. Shares of Verizon, T-Mobile and AT&T have all fallen over the course of 2021.

Shares in the big wireless network operators have been declining this year. Click here for a larger version of this image.
(Source: Yahoo Finance)

The situation has caused some consternation among financial analysts. "T-Mobile's treatment by the market has us scratching our heads," wrote the analysts at Sanford C. Bernstein & Co. in a recent note to investors. They argued that investors should use the declines to invest in T-Mobile's stock.

Recon Analytics' Entner attributed the share price contractions to "a lot of uncertainty." He explained that the arrival of 5G technology, alongside new management teams at most of the nation's operators, have investors spooked. "I think their worldview has been shaking," he said.

Entner argued that part of the concern among investors is that the industry's outsized growth isn't sustainable. "Something has to give," he said.

And when that happens, "there will be winners and losers," Entner said. "There will be a lot of blood on the floor."

When the music's over

"We're not expecting that level of activity to continue into 2022 and beyond," acknowledged AT&T chief Jeff McElfresh during a recent investor event. He specifically pointed to an "inflated level of postpaid growth," and he said AT&T's guidance for next year "doesn't count on the industry being outsized in terms of postpaid growth."

Entner has previously described the US wireless market's growth rate as a "bubble," but he suggested it won't necessarily pop during 2022. "I wouldn't say it's popping. I would say it's slowly deflating," he explained.

Entner argued that the sector's prepaid-to-postpaid migration will slow, government subsidies will cool, and sales of phones to children will ease in the coming years. After all, "you can't give newborns a handset."

What's noteworthy, though, is that Wall Street isn't pleased with the warnings coming from AT&T and others. Indeed, after McElfresh said that AT&T expects customer growth to slow, AT&T's shares fell by almost 5%. According to MarketWatch, McElfresh's comments "reinforced market fears" about overall industry trends, according to at least one analyst.

"It's a no-win situation," Entner pointed out. He said that shares in AT&T, Verizon and T-Mobile began falling earlier this year as they raked in new customers, and have fallen further amid warnings that such growth might slow.

"It's Wall Street and the investors not fully understanding what's going on," Entner argued. And he pinned the blame on the operators themselves for not clearly telling a compelling 5G investment story.

Accelerate Your 5G Network Launch with Confidence
Download the White Paper: Why Visibility is Needed to Innovate in Your Wireless Network
Get the eBook: 5G Signals New Challenges with Network Monitoring and Performance
Get the white paper: 5G Ready Now!
5G Smart City End-Through-End Visibility - Download the Infographic
More Blogs from DanoVision
The 5G debacle in the C-band isn't over yet

International flights have resumed after a day of 5G-related cancellations. But worries over C-band interference continue, and the situation could ultimately cost years and billions of dollars.

'There's a term for what the FAA and the aviation industry is doing: blackmail. It is a criminal offense,' wrote research firm Strand Consult of the troubled launch of 5G in C-band spectrum.

Trump's State Department launched a 'Clean Networks' initiative that rallied US allies against Huawei. Biden's new 'Alliance for the Future of the Internet' likely will do the same.

A year into the Biden administration, 'there is no spectrum plan, there are no big auctions planned, at a time when everyone was all about 'we've got to beat China on the race to 5G,' said a former FCC chief.