By their nature, protest movements often splinter into more radical factions. Just look at the French Revolution, which started out demanding rights for plebs and ended up guillotining most of its dandies. A century later, Russian revolutionaries split into Menshevik and Bolshevik camps after a tiff at a party.

Similar cracks have appeared in open RAN, a protest group rebelling against the technologies used in today's mobile networks. If this topic received unlikely treatment at the hands of Monty Python, it could rival the split between the People's Front of Judea and the Judean People's Front in Life of Brian.

Open RAN's primary objective is to build support for a new interface between radios and baseband equipment, which processes signals. With this, operators could theoretically buy radios from one vendor and baseband gear from another. The interface in widespread use today forces operators to use the same supplier for everything. That makes it a barrier to competition, say the revolutionaries. 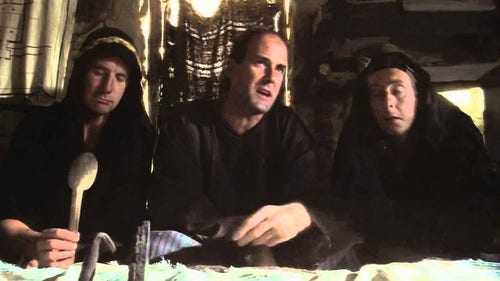 'But apart from bringing low-cost networks, advanced technology and competition, what has Huawei ever done for us?'

But one open RAN faction thinks baseband is a major problem. Running software on Intel's x86 processors, as purists intend, would gobble up enough power to hasten climate change overnight, it seems. The additional expense can be offset through more advanced software, say optimists in this camp. Critics are not convinced.

In the meantime, another, more radical group dismisses this concern almost entirely. The more pressing issue is not baseband but radio. Unless this improves fast, operators using open RAN technologies will have no chance against Huawei, the Chinese vendor that has become an enemy of the US government and some of its open RAN advisors.

Papa does preach
That faction has already rounded on its fellow open RAN protestors and effectively accused them of overlooking the radio problem. Its Lenin is Steve Papa, the CEO of Parallel Wireless, one of three prominent US companies developing open RAN software. When Altiostar and Mavenir, his two rivals, recently teamed up on a radio project, Papa gave them a harsh critique in comments emailed to Light Reading and other publications.

Open RAN, or O-RAN, as he calls it, "will only be as good as the radios that are available," he said. As far as he is concerned, Huawei is the Tsar in 5G radios and those Altiostar and Mavenir are developing are "not going to change that lead" in the all-important 5G market. "If Ericsson and Nokia are struggling to be competitive with Huawei's radios, we should not expect O-RAN to magically solve this problem by using the same semiconductors available to Ericsson and Nokia at present."

Huawei's lead in this market relates to its use of power amplifiers based on gallium nitride, a material that is ideal for high-performance 5G products. Huawei, says Papa, has invested substantially more than Ericsson, Nokia or any independent radio vendors in gallium nitride technologies. The result, he insists, is a more power-efficient set of radios and a major competitive advantage. "Energy efficiency is of paramount importance to operators," he said.

Earl Lum, a semiconductor analyst with EJL Wireless Research, agrees that Huawei's decision to use gallium nitride has paid off. The move appears to have happened years ago, when Chinese vendors began using gallium nitride for the performance-boosting "massive MIMO" products then sold to China's 4G operators. Today, it is more suited than silicon to the high temperatures and power demands that come with 5G active antennas, says Lum.

That history puts Ericsson about four or five generations behind Huawei on these technologies, according to the analyst. Chinese vendors, he says, have recently unveiled high-specification active antenna units that weigh just 25 kilograms apiece. "The current Ericsson solutions are still in the 40-kilogram range and so you have a significant weight difference between Chinese and European suppliers."

But while Lum and Papa might agree with each other about Huawei's lead, their opinions diverge on the underlying causes and the necessary response. Papa blames a lack of semiconductor innovation outside China and has repeatedly urged US authorities to pump an extra $1 billion into radio semiconductor research. He has even suggested using the $1 billion the US recently fined Ericsson for corruption, a remark that is unlikely to win him many friends in Stockholm.

Lum disputes this semiconductor lag. The US already has a company at the forefront of gallium nitride technology in Cree, a semiconductor firm based in North Carolina, he says. Huawei, meanwhile, obtains its gallium nitride components from Japan's Sumitomo, says John Baker, Mavenir's senior vice president of business development. "Huawei is completely dependent on an outside source for that technology, which is fundamental to the efficiency of the amplifiers," says Baker.

Whether Sumitomo or Huawei is the real design expert is the next point of contention. If it were Sumitomo (or Cree), then other companies would surely have challenged Huawei using those designs, reckons Papa. But Lum says Huawei is only ahead because it started using the technology in advance of its rivals. "Both Ericsson and Nokia are going to switch over to gallium nitride, too," he says. "Everyone will use gallium nitride, especially as the bandwidths get wider and you go up in frequency."

Ericsson, for its part, says its devices are now based on various semiconductor technologies, including gallium nitride. "The specific choice of optimal device technology depends on many factors such as radio product type, output power level and frequency band," said a spokesperson. "We are not locked into any specific choice of technology or supplier."

It's all about the baseband
The real problem for the open RAN protest movement is not the radio but the baseband, insists Lum. And while he is not himself a part of that movement, some of the protesters are also concerned about the inadequacy of general-purpose processors.

They include Alex Choi, the senior vice president of technology and innovation for Deutsche Telekom, Germany's biggest operator. Despite his enthusiasm for open RAN, and his interest in using it as an alternative to mainstream technologies, Choi sees hurdles. "If you have an ASIC [application-specific integrated circuit] for baseband processing, it is always cheaper than using a general-purpose processor [GPP] like an Intel processor," he told Light Reading earlier this year.

Choi thinks the x86 costs can be offset in other areas, though. One option is to entirely separate the radio software management from the underlying hardware and then work on improving the efficiency of the software. Earlier this year, Deutsche Telekom boasted success in trials with several vendors. VMware, a cloud-computing part of Dell, contributed a newly standardized feature called a "RAN Intelligent Controller" (RIC), aiding hardware and software separation. An algorithm provided by Cohere, a Californian software company, seems to have produced a major improvement in radio performance.

"The cost of using the GPP is more expensive than an ASIC, but that can be offset by the higher layer  this advanced radio resource management algorithm," Choi told Light Reading. "In total, the overall cost can be lower than in the case of using a traditional platform."

This week, AT&T appears to have done something similar with Nokia. Much like Deutsche Telekom, AT&T used a RIC provided by Nokia to automate network management and boost efficiency. France's Orange has also been touting the RIC as a major new element that could help to "optimize" the customer experience.

None of this will be enough, say detractors. "I don't think it is possible using Intel that you will overcome anything on scaling," says Lum. "You can do it, but you will need 20 kilowatts of energy to power the amount of capability you will get from 500 watts of ARM-based solution." A subsidiary of Japan's Softbank, the UK's ARM remains the chief architectural alternative to Intel in numerous sectors.

Factionalism and dispute can be fatal to small protest movements, but enthusiasm for open RAN has become mainstream in the last few months. Chief executives at Deutsche Telekom, Vodafone and other giant service providers are as au fait with open RAN as they are with the company share price. Some variant of the technology seems bound to succeed. The unknown is how fast that revolution happens, and how much it rocks the establishment.