It's a headscratcher that a smartphone company with as crappy a brand name as Nothing has been able to generate so much publicity. Nor is most of this week's coverage quizzical in nature, asking why a mainstream news site like the BBC saw fit to write about another addition to a category of devices that has long ceased to be interesting.

Is it because the Nothing Phone (1) marks an iPhone-like break with earlier designs, or does something totally different? Mmm, not really. It has a translucent back, which means that some of the phone's electronic guts are visible. Diodes here light up to provide notifications, which sounds like the most useless feature ever for people who carry their phones out of sight rather than dangling from a selfie stick strapped to their foreheads (so everyone, then).

It's also free of what Deutsche Telekom (an operator that plans to sell it) calls "bloatware," industry jargon for pre-installed software that gobbles storage space. This could explain the Nothing brand, but one customer's bloatware is another's pleasure on the commute to work. People who buy Nothing 1 are likely to spend their first hours filling up its memory with useless applications so they have something to do. 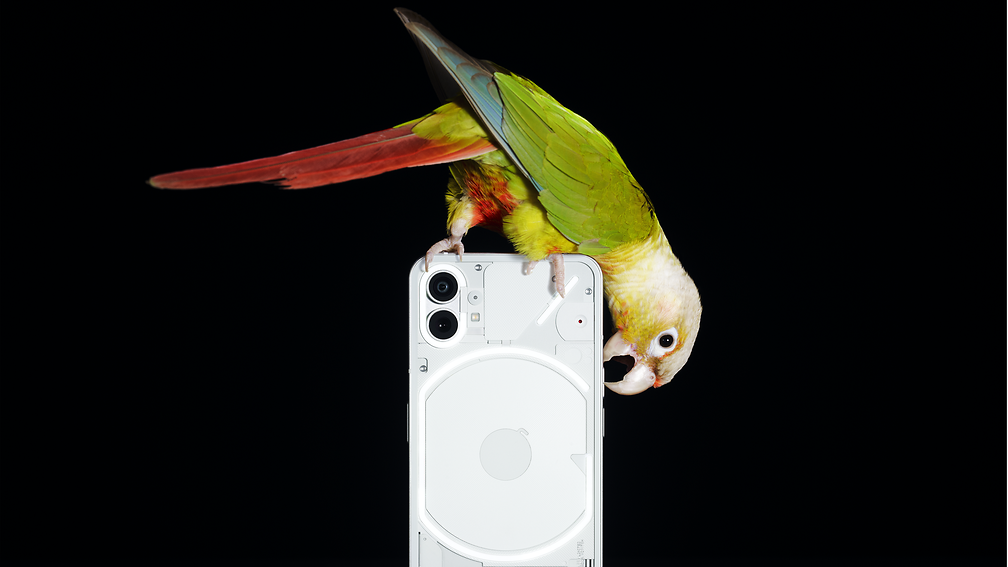 Where are my nuts?
(Source: Deutsche Telekom)

Advertising imagery bizarrely features a parrot perched on the phone's rim, gnawing at the off button as if it were a Brazil nut. Parrots are famous mimics, of course, which is apt because Nothing 1 mainly copies the dozens of other Android smartphones that preceded it. This message was probably not the company's intention, though.

Seriously, a translucent smartphone with no bloatware is about as necessary as a see-through washing machine. Some weirdo out there would probably enjoy being hypnotized by an unobstructed view of his underwear on spin cycle, just as someone is probably walking around with a selfie stick glued to his head. But was a mass market well served by smartphone makers crying out for LED notifications and a lack of pre-installed features?

The timing of the launch is odd, too. Smartphone shipments tumbled 13% in the first quarter of this year, according to research firm Omdia (a sister company to Light Reading), as consumers realized all their disposable income would be needed just to keep the lights on and manufacturers ran into supply-chain gridlock. Upgrade cycles had already lengthened  people are resistant to buying an iPhone 13 when the only improvement on the iPhone 12 is a slightly better camera. Nothing 1 does not seem like the shot of innovation the industry needs.

On the plus side, the phone is cheap compared with the most expensive gadgetry out there, starting at £399 (US$475) in the UK. Founder Carl Pei previously ran another phone company called OnePlus and has assembled an impressive line-up of backers, including Tony Fadell (co-creator of the iPhone and founder of Nest Labs).

Nothing managed to raise more than $144 million to develop its handset, reports the BBC (which, in its defense, may have covered the story because Nothing is registered in the UK). This, however, is peanuts alongside the research-and-development budgets of Apple ($21.9 billion last year) and Samsung ($17.2 billion), the world's two largest smartphone makers in the first quarter of this year, according to Omdia's research.

Analysts are dubious, to say the least. "The Nothing Phone (1) offers standard specs and features and differentiates itself via the 'glyph' interface on the back slab of the phone," said Ardit Ballhysa, an analyst at GlobalData, in written remarks. "The glyph, however, is more of a gimmick than a feature most consumers will want to use."

Ballhysa's take is that Nothing might threaten smaller manufacturers with mid-range phones. However, he thinks it will "struggle to take market share from bigger players in the same category, such as Apple, Samsung and Xiaomi." Operators are likely to push bigger brands' smartphones instead, he says.

Device makers don't have to be that inventive to thrive. Dozens of companies have ripped off Apple's iPhone design since it first appeared in 2007 (not always successfully), competing mainly on price. But Carl Pei claims to be genuinely different.

"When we started Nothing we wanted to bring back the excitement we once felt for the tech industry," he previously said. "Joining forces with leading telcos and retailers, we look forward to shaking up the smartphone market together." If this is excitement, then God help the business.

Juniper Networks Scalable IP Services Fabric for Wide Area Networks
Juniper Moves the Network Out of the Way, So You Can Focus on Customer Experience
Get Connected with Chris Lewis Podcast: Cloud-Native & Distributed Edge Architectures in SP Networks
The Open Evolutions of the 5G Network
Rakuten and Juniper Discuss the Management of O-RAN Platforms
More Blogs from Morris Lore
Public cloud holds perils, and don't expect an 'open' RAN with it