The C-band struggle continues, but early results suggest a win for telcos

US wireless operators are advancing their plans to put 5G operations into the C-band spectrum, and early results are encouraging. Meanwhile, parts of the US airline industry continue to scramble over concerns that the deployments might interfere with aircraft operations  worries that could have significant, long-term repercussions for some companies and government officials.

The latest developments signal that the C-band issue will remain a hot topic in the coming weeks and potentially for months and years to come.

Even so, it is becoming clear that the C-band spectrum may indeed be worth the eye-popping amounts of money that Verizon, AT&T, T-Mobile and others spent on it in an FCC auction last year. According to new findings from network-monitoring company Ookla, Verizon Wireless' median 5G download speeds jumped 50%  from 76.51 Mbit/s during the week of January 12 to 116.29 Mbit/s during the week of January 19  due to its C-band launch. 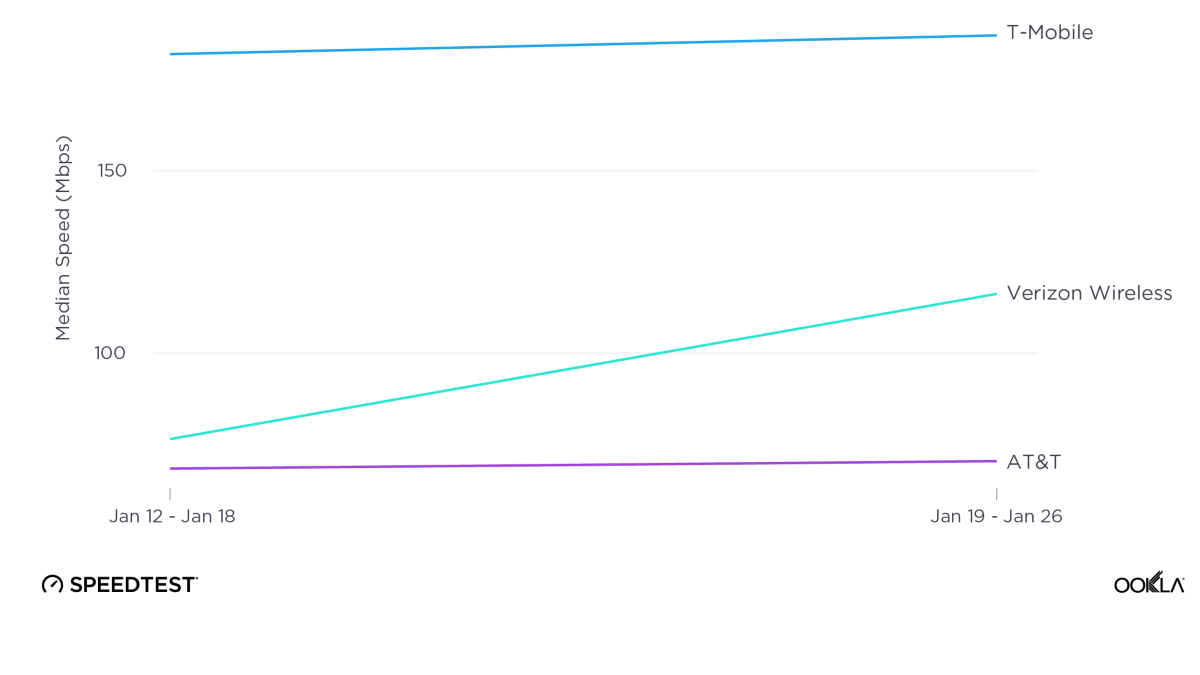 According to data from Ookla, Verizon's download speeds showed a significant increase after the operator launched 5G in its C-band spectrum in January. Click here for a larger version of this image.
(Source: Ookla)

"This massive improvement in speed shows the power of Verizon's widespread deployment of C-band spectrum and C-band's ability to deliver fast speeds," Ookla noted in a post on its website.

"Verizon's recent C-band launch should help the company's competitive position," wrote the financial analysts at Evercore in a note to investors Sunday.

However, that speed boost has been unavailable or curtailed for Verizon's customers at dozens of airports around the country. That's because Verizon and AT&T (though its C-band network is far smaller) agreed to delay the activation of C-band radios on cell towers near airports. All told, roughly 500 Verizon cell towers  about 10% of its total C-band deployment  have been affected, according to Reuters.

At issue are concerns among some airline industry executives that 5G operations in the C-band spectrum might interfere with aircraft radio altimeters  gadgets that can be critical to landing in low-visibility conditions. Those concerns escalated into a remarkable few weeks of very public, high-stakes negotiations that finally resulted in AT&T and Verizon agreeing to delay their 5G launches.

According to the Federal Aviation Administration (FAA), the delay has allowed more time to ascertain the exact locations and operating parameters of cell towers that are close to airports, as well as how the C-band transmissions from those towers might impact radio altimeters across a wide range of aircraft carriers. In recent days, the FAA has announced that 90% of the commercial fleet in the US won't be affected by 5G. The agency, along with Verizon and AT&T, also recently agreed on unspecified "steps that will enable more aircraft to safely use key airports while also enabling more towers to deploy 5G service."

It's also worth noting that some wireless vendors are more than happy to sell their services to the FAA and other officials amid this ongoing testing.

"We aim to help the industry and government regulators tackle any issues comprehensively, to enable communication service providers and aviation to operate harmoniously," Viavi's Sameh Yamany said in a release detailing the network-testing company's various offerings.

"This is a dynamic process," JetBlue Airways CEO Robin Hayes said during his company's recent quarterly conference call, according to a Seeking Alpha transcript of the event. "Whilst I'm pleased that the industry and the government are now collaborating effectively to work through this problem together, we can't assume that we are completely out of the 5G woods yet."

He's not alone in worrying. NPR reported that Alaska Airlines canceled all 24 of its flights into and out of Paine Field near Seattle on Monday and Tuesday last week due to weather and possible 5G interference. At issue was the airline's Embraer E175 jet, which uses an altimeter not yet approved by the FAA. There are concerns that such altimeters may need to be replaced, a potentially expensive proposition.

"Some of our regional jets have not yet been cleared at certain airports and are still subject to restrictions on landing/takeoff during low visibility conditions (such as dense fog or winter weather) that were put in place before the agreement to limit 5G," the airline warned customers last week. "This is causing cancellations, delays and diversions."

It's difficult to determine how widespread such cancellations are, particularly among smaller airlines and airports. Neither the Regional Airline Association nor the Airlines for America trade associations responded to questions from Light Reading about the issue.

Nonetheless, the disruptions are prompting plenty of finger-pointing among past and present US government officials charged with preventing such problems.

"The Trump FCC had the solution at hand, but failed to use it," wrote Tom Wheeler recently. Wheeler is the former FCC chief appointed by President Obama.

"The C-band reallocation also inconvenienced another industry: the satellite licensees that had been using the spectrum," he added. "The FCC required those who bought the new licenses to pay the satellite companies to retrofit their systems. Something similar could have easily been designed into the FCC's C-band decision to pay the airlines for their altimeter retrofit."

Interestingly, a detailed report on the topic by CNN found a noteworthy lack of communications among the FAA, the FCC and the NTIA (an executive branch agency charged with federal spectrum management) during the development of the C-band auction.

For example, former NTIA chief Adam Candeub told CNN that the agency disagreed with the airline industry's concerns about 5G interference to radio altimeters. As a result, the agency did not officially pass along an FAA letter about the topic to the FCC prior to its C-band spectrum auction. Further, the FAA didn't register its concerns directly with the FCC, despite evidence that it probably could and should have.

CNN also reported that the issue was exacerbated by a reluctance among telecom industry executives to cooperate with the airline industry to address concerns.

One stumbling block involved the specific location of C-band transmission towers, which wireless network operators were unwilling to share with the airline industry. When the FAA "plays the safety card, usually it's an ace, and for whatever reason, the telcos have been trying to pretend it's a one," according to an unnamed government official who spoke with CNN.

It's worth noting that the current head of the FAA  Steve Dickson, an appointee of former President Trump  is scheduled to testify in front of the House Transportation and Infrastructure Committee later this week on the issue.

And his testimony will come just days after a US Government Accountability Office (GAO) report on how the NTIA might improve its spectrum reallocation process. "We found that NTIA lacks a formal process for planning these transfers," the report states.

Finally, it's worth noting that there's a distinct chance that lawyers will ultimately decide how the issue plays out. For example, Recon Analytics analyst Roger Entner told S&P Global that it's possible Verizon and AT&T may file a lawsuit over their C-band launch delays considering the FCC auctioned the spectrum as free and clear to use more than a year ago.