The 5G robots are officially coming

Boston Dynamics announced that its Spot robots can now connect to AT&T's network. "Customers with AT&T's private 5G networks will be able to teleoperate Spot immediately," the company wrote on its website. "And public 5G teleoperation will be made available in the near future."

Although the development may seem minor, it represents an important marker in the evolution of 5G. As evidenced by years of YouTube videos featuring Boston Dynamic's human- and dog-shaped robots performing various tricks, the company has long been a high-profile cheerleader for the robotics industry. Its embrace of 5G technology in its official product lineup signals another step toward a future where all kinds of non-smartphone gadgets connect to 5G.

Boston Dynamics began selling Spot in 2020 for roughly $75,000, after almost 30 years of research and development. The robots have been used in several 5G tests, trials and demos.

For example, Ericsson said more than a year ago that it connected a Boston Dynamics Spot to TDC's commercial 5G network so the robot could patrol the perimeter of Hans Christian Andersen airport in Denmark. More recently, IBM said that it was testing 5G, edge computing and other services with Spot robots that were inspecting National Grid's gas and electric operations in Massachusetts and New York. Robots of all shapes and sizes, including those from Boston Dynamics, played an outsized role at the MWC trade show in Barcelona in February. 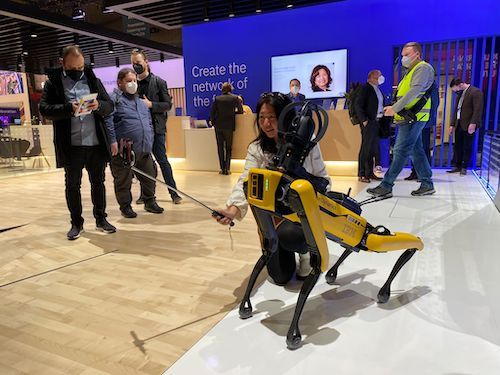 Boston Dynamics' Spot was on display during the recent MWC trade show in Barcelona, Spain.
(Photo by Fiona Graham)

Now, Boston Dynamics is touting the 5G capabilities of Spot as a selling point to customers, rather than simply providing the robots to other companies for their 5G trade show demos. The company said customers could purchase its Spot CORE I/O add-on, which provides additional computational and communications capabilities, including support for 4G LTE and 5G connections.

"It is intended for industrial and commercial use, by individuals with proper training who operate it in accordance with its user guide," according to Boston Dynamics. "This version is not intended for use in the home, or by children or others who cannot operate it responsibly. However, we may explore consumer-facing applications of a future variant of this robot or others."