Just weeks after Dish Network said it plans to switch its MVNO business from T-Mobile's network to AT&T's network, T-Mobile responded with a promotion designed to siphon Dish's MVNO customers onto its own 5G network.

Specifically, T-Mobile announced a new offering by its "Metro by T-Mobile" prepaid brand that offers a free 5G phone and unlimited 5G service at roughly half the price that Dish's Boost Mobile brand charges.

T-Mobile also appeared to take an oblique swipe at Dish in its release by noting that "millions of prepaid customers still have old devices that don't even access last year's technology, and some on Boost are on technology from a decade ago." That's likely a reference to Dish's complaints that it needs to shift an unspecified number of its Boost Mobile customers off the CDMA network that T-Mobile plans to shutter at the beginning of next year.

In other T-Mobile news, the company updated its customer-facing coverage map to include its growing "ultra capacity" 2.5GHz 5G network. Previously, the company offered only a generic 5G" coverage layer that did not differentiate between its 600MHz and 2.5GHz 5G networks. That's important considering one is slightly faster than 4G while the other offers speeds around 300 Mbit/s.

"T-Mobile's 2.5GHz deployment should become more geographically material as T-Mobile expands into even less dense areas in 2022 and 2023," wrote the financial analysts at New Street Research in a note to investors Tuesday. "Still, the progress to date underscores just how far T-Mobile is getting ahead (Verizon and AT&T's [midband] C-band networks aren't live anywhere, and they are very early on the deployment timeline)." 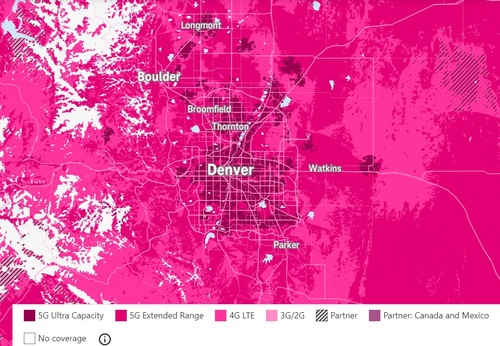 T-Mobile now offers an "ultra capacity" coverage layer on its 5G map. Click here for a larger version of this image.
(Source: T-Mobile)

Taken together, the efforts by T-Mobile indicate the operator is gearing up to press its advantage in valuable midband spectrum for 5G  centered on its 2.5GHz holdings, which it brands "ultra capacity"  to counter rivals ranging from Dish to AT&T.

A battle over prepaid

T-Mobile's newest prepaid offer is particularly worrisome for Dish, which acquired roughly 9 million Boost Mobile prepaid customers from T-Mobile last year. Those customers currently connect to T-Mobile's network thanks to a 2019 MVNO agreement between Dish and T-Mobile, but Dish announced earlier this month it will switch that MVNO deal from T-Mobile to AT&T. Thus, T-Mobile stands to lose roughly 9 million wholesale customers.

With its new prepaid promotion, T-Mobile is hoping to get those Boost customers to switch to its Metro by T-Mobile brand, essentially keeping them on the T-Mobile network. T-Mobile's latest promotion promises "unlimited" 5G service for one line of service for $25 per month, a price that won't change for two years. It also promises a free phone to customers who trade in an existing device, including low-end flip phones. T-Mobile noted customers on the plan may see their speeds slowed after they consume 35 gigabytes of data during a month.

T-Mobile's offer represents a competitive shot against Dish's Boost, which currently offers unlimited plans that start at $50 per month, with speeds slowed after customers consume 35GB of data in a month.

T-Mobile's promotion  and its public call-out of Boost  appears to cap months of deteriorating relations between T-Mobile and Dish. Although the companies inked a major agreement in 2019 that paved the way for T-Mobile to acquire Sprint, Dish earlier this year began complaining of T-Mobile's plans to shutter the CDMA it acquired from Sprint at the beginning of 2022. Dish argues that plan will strand a large but unspecified number of its Boost customers who still rely on that network.

With its new AT&T MVNO agreement, Dish will likely soon begin working to get its existing Boost customers, including those on T-Mobile's CDMA network, to acquire a new phone or new SIM card that can access AT&T's network. But, thanks to T-Mobile's promotion, Dish will likely need to conduct that migration effort with dramatically reduced prices, lest it lose its customers to T-Mobile.