T-Mobile: FWA is 'ready for its primetime moment'

T-Mobile executives promised that the operator's new fixed wireless Internet business is now hitting its stride and will continue to grow in the months and years to come.

Further, they said that the bulk of their new fixed wireless access (FWA) customers are coming from cable providers.

"We're half the price of cable companies," said Dow Draper, the T-Mobile executive in charge of the operator's FWA offering, during T-Mobile's quarterly conference call. He argued that, in general, Internet customers aren't pleased with cable operators and that T-Mobile's pricing doesn't sport the same kinds of fees and price hikes that cable operators sometimes levy.

"I think some people are going to be surprised at how mainstream this [FWA] product really is," added T-Mobile CEO Mike Sievert on the call. He reiterated that T-Mobile's average FWA users consume 300-400 GB of data per month, but that some consume 1 TB or more. He said T-Mobile's 5G network has the capacity to support that kind of usage.

Sievert's statements are noteworthy considering analysts have been skeptical that T-Mobile, Verizon and other FWA providers can make a significant dent in the cable industry's overall home Internet business. "It doesn't seem, to us, that it all adds up," wrote Craig Moffett, a financial analyst with MoffettNathanson, in a recent note to investors.

However, new data from Bloomberg shows that FWA accounted for 22% of the 3.7 million new broadband customers signed up by the five biggest cable and telephone companies last year.

Importantly, T-Mobile officials announced that the company would increase spending on its network during 2022 to support FWA and other 5G offerings. T-Mobile's networking chief Neville Ray said that the operator expects to cover 260 million people with its speedy midband 2.5GHz 5G network by the end of 2022 and 300 million people by the end of 2023. 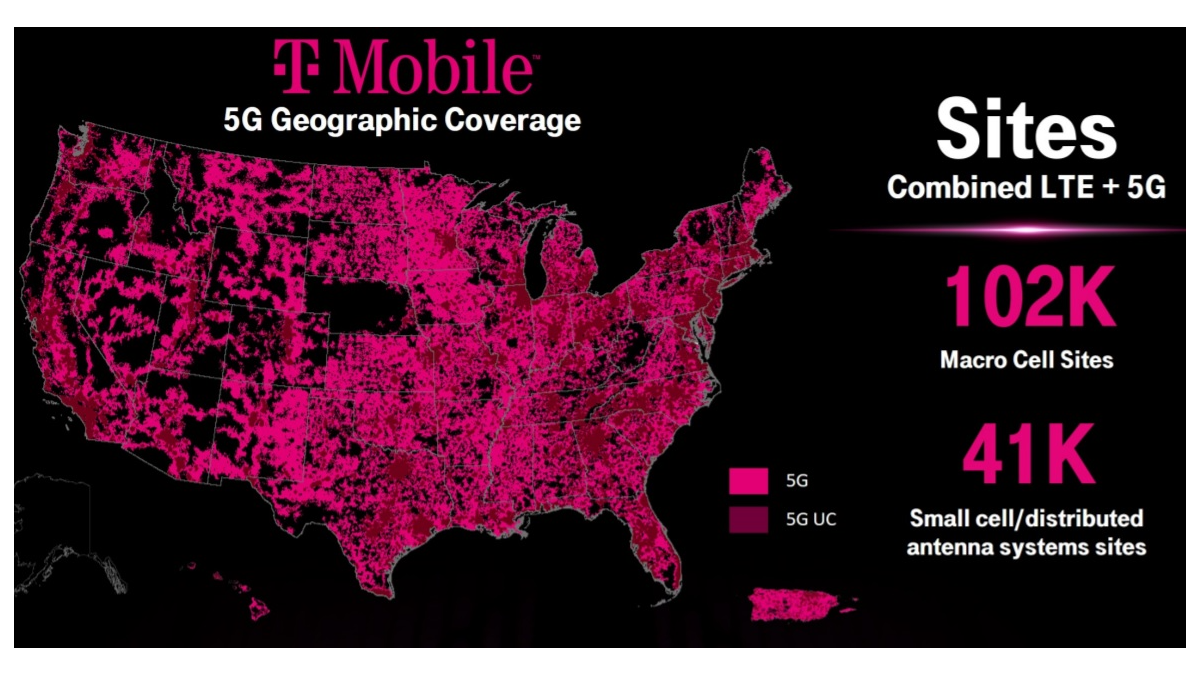 T-Mobile continues to boast of its 5G network buildout. Click here for a larger version of this image.
(Source: T-Mobile)

He said T-Mobile plans to wait until 2023 to begin that work because that's when one single radio supporting both bands would be available from T-Mobile's equipment vendors. AT&T, meanwhile, expects to start deploying those spectrum bands this year, but plans to do so with two separate radios.

Broadly, T-Mobile executives argued that the operator is ahead of both Verizon and AT&T in the deployment of 5G in midband spectrum, and expects to retain that position in the coming months and years.

T-Mobile said it expects to add a total of up to 5.5 million postpaid net customer additions during 2022. Company officials declined to provide specific customer figures for T-Mobile's FWA business.