T-Mobile emerges as 'the most compelling investment proposition' in 5G

Here in the spring of 2022, there are plenty of concerns roiling the 5G industry. Inflation is up, there are indications that customer growth may be slowing, supply chain troubles continue, and there are the persistent worries that big 5G network investments may never pay off.

Last week those concerns were on clear display following Verizon's sluggish quarterly customer performance amid its massive 5G upgrade project, and AT&T's repeated warnings that inflation could force it to raise prices.

And then, on Wednesday, T-Mobile posted its own first-quarter results.

"The industry has never seen a competitor that combines both best network and lowest prices," argued the financial analysts at MoffettNathanson in a note to investors following the release of T-Mobile's earnings. "With a long growth runway and a rather undemanding valuation, T-Mobile still presents in our mind what is easily the most compelling investment proposition in our coverage universe."

That's certainly the message that T-Mobile's management team is pushing.

"This is a business with major, under-penetrated growth opportunities. We are proving we know how to execute and that's why we reliably bring the performance, quarter after quarter," said T-Mobile CEO Mike Sievert during the company's earnings conference call. "Our growth strategy has integrity and is reliable, safe, quarter-after-quarter growth, that comes in just like we promised you it would. And it comes in with a healthy industry, and a dynamic where T-Mobile can achieve its cash flow aspirations. And so we like it."

Perhaps more importantly, T-Mobile raised its guidance for the remainder of 2022. The company said it now expects to gain between 5.3 million and 5.8 million postpaid net customer additions during the year, up from previous expectations of 5 million to 5.5 million. The company also increased its financial projections for 2022.

But, according to the analysts at MoffettNathanson, the most noteworthy statistic to come out of T-Mobile's first-quarter report was a 1% increase in its average revenues per user (ARPU), an indication of the popularity of its more expensive unlimited plans.

However, the figure is even more noteworthy in light of T-Mobile's ongoing work to shut down Sprint's network and transition millions of Sprint customers onto the T-Mobile network. Sievert said T-Mobile is nearing the "home stretch" of that integration, having shut down CDMA services to roughly 212,000 postpaid phones and around 349,000 IoT devices during the first quarter.

"Both AT&T and Verizon posted negative ARPU growth yet again in Q1," the MoffettNathanson analysts explained, arguing the development is particularly important in light of fears over rising inflation. "That makes T-Mobile's ARPU growth  yes, growth!  all the more impressive. Indeed, in our view, it is perhaps the most important part of the Q1 story. It stands in sharp contrast to the declines at AT&T and Verizon."

Waiting for a slowdown

The results from T-Mobile come amid widespread expectations that outsized customer growth in the US wireless industry will slow sometime during 2022. "There is little argument that industry growth has been well above sustainable levels," wrote the MoffettNathanson analysts. "Even the companies agree that 5x population growth rate isn't sustainable. What the companies don't agree about is who wins and who loses when growth does inevitably slow." 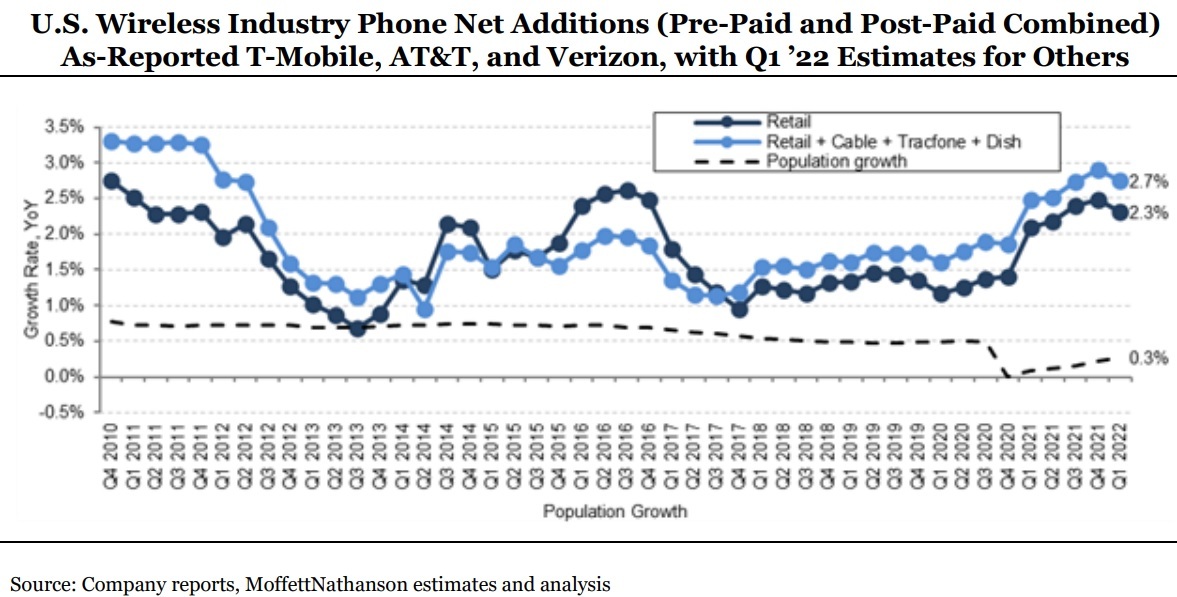 According to the analysts at MoffettNathanson, the US wireless industry has enjoyed outsized customer growth through 2021. Click here for a larger version of this image.
(Source: MoffettNathanson. Used with permission.)

But the financial analysts at New Street Research, in their own assessment of T-Mobile's earnings, argue that there are no signs yet of a broad slowdown in the growth of new customer additions in the US wireless industry. But they suggested that Verizon might be the first to be affected by the trend.

"Based on today's commentary, Verizon may be facing market share pressure in 2Q22," they wrote. "This is surprising, in that Verizon is doing everything right. They bought 160MHz of C-band [spectrum] and they are deploying it faster than expected. Perhaps it's as simple as AT&T and T-Mobile are improving. It is tough for the company with 40% market share in a four-player market to maintain their position as differentiation between the players narrows."