Europe's 5G spectrum auctions to date certainly seem to illustrate that national governments still treat radio frequencies as a big cash cow, with scant thought for the impact this might have on the cost of future network rollouts.

Italyand Germany were both criticized over their approaches to 5G auctions  the former for maximizing proceeds at the expense of competition in the telecom sector, and the latter for reserving airwaves for industrial groups and driving up license fees for the remaining frequencies.

More recently, France forced its four operators to cough up about 2.8 billion (US$3.3 billion) for 5G licenses, and Dutch operators had to shell out 1.23 billion ($1.42 billion). 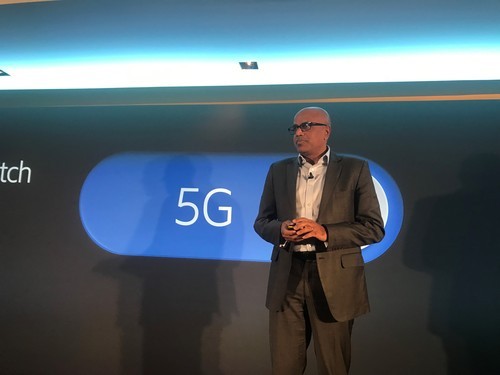 Ericsson's Arun Bansal says Europe is getting it badly wrong on spectrum auctions.

In most markets, the only bidders are the companies that already operate telecom networks, raising questions over why auctions are run at all. Other markets have been forced to delay spectrum auctions primarily because of COVID-19, in turn putting 5G rollout plans on hold.

Indeed, during the latest Ericsson Ringside Session, how and when spectrum is being awarded were cited as key reasons for Europe's lack of 5G progress compared to Asia-Pacific and the US.

The online panel, hosted by Peter Mandelson, currently the chairman of Global Counsel and a former cabinet minister under Prime Ministers Tony Blair and Gordon Brown, was titled "5G and Europe's recovery: time for a step change," and sought to clarify why Europe is still a 5G laggard on the global stage, and what needs to be done to change this.

"Spectrum is the elephant in the room here," remarked Mandelson, after listening to complaints from Arun Bansal, executive vice president and head of market area, Europe & Latin America at Ericsson, that spectrum is too expensive and spectrum policy is too slow.

Anthony Whelan, digital policy advisor, office of the President at the European Commission (EC), noted that not all member states have implemented best practices on spectrum deployment and conceded that spectrum policy has been holding Europe back.

However, he insisted that "all is not lost. We are very early in the game."

Whelan pointed to the opportunities that lie ahead once standalone 5G technology is deployed, such as 5G's ability to act as a platform for a range of economic and industrial activities.

Barbara Frei, executive vice president, Europe operations at Schneider Electric, agreed that the main business case for 5G lies in supporting industrial applications. Contrary to some views, she believes that Germany did the right thing in reserving spectrum for industry.

Schneider Electric itself is working with Orange France and Nokia on indoor 5G trials at its factory in Le Vaudreuil. The trials are supporting two use cases: augmented reality applied to maintenance technician activities and the implementation of a telepresence robot for remote visits. However, the right to use the frequencies awarded for the trial expires later this year, Frei remarked wryly.

Despite the hurdles, the European Commission is pinning its hopes on 5G and supercomputing to help different nations recover economically from the COVID-19 pandemic. The commission recently issued a recommendation on how all 27 member states of the European Union (EU) could ensure a timely and more cost-effective way of deploying very high-capacity broadband connectivity infrastructure, including 5G.

Allison Kirkby, president and CEO of Sweden-based Telia Company, noted that the pandemic has amplified the digital divide as people have become more reliant on the Internet to keep in touch.

"We believe digitalization and addressing the digital divide will be key to boosting society after the pandemic," she said. "5G will play a role here."

Kirkby said she applauded efforts to harmonize spectrum allocation throughout the EU, but pointed to delays at national levels that are stalling 5G rollouts. She noted, for example, that Sweden was first to launch 4G, but will be late with 5G because of its delayed spectrum auction.

As things stand, the Swedish Post and Telecom Agency (PTS) plans to sell 5G-capable spectrum in the 2.3GHz and 3.5GHz bands in November.

The Telia CEO also made references to the geopolitical tension over certain suppliers  no doubt referring here to US pressure to block the use of Huawei equipment in future 5G networks.

"This has delayed things," she said. She also said governments should not regard spectrum as merely a means to raise cash.

The panel also discussed whether it is the role of the EC or national governments to drive 5G deployments and achieve digital transformation objectives.

Kirkby said that an EU framework to support a collaborative and common approach plays an important role, but noted that this should enable domestic policy and innovation to allow member states to thrive.

Mandelson concluded that while Europe as a whole needs to get the 5G process back on track, "it seems more rests on member states than we have fully acknowledged."