5G is the fastest "G" in terms of uptake among phone makers, according to new figures from research and consulting firm Strategy Analytics.

The firm reported that 5G smartphones will account for over 50% of all handset sales in 2023. The technology is poised to reach that level after just four years of 5G phone sales. "In comparison, it took 4G handsets five years to reach a similar level," the firm reported. 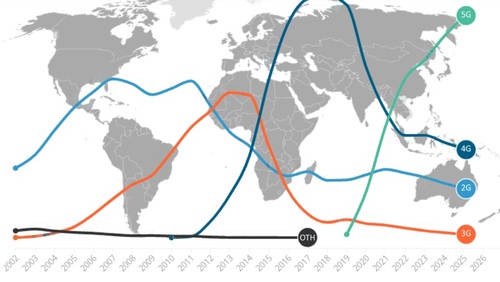 The rise of 5G technology in smartphones has also upended the vendor marketplace. Huawei, once a leader in smartphones, has fallen dramatically due to ongoing US sanctions on its business. The company is no longer able to sell 5G-capable phones.

Into Huawei's place has jumped China's Xiaomi, which was the world's leading 5G Android smartphone vendor in the second quarter, according to Strategy Analytics. The firm reported Xiaomi accounted for 26% of the 95 million 5G Android smartphones shipped globally during the quarter.

Overall, Samsung remains the world's biggest smartphone vendor across all Gs, with 18.2% market share in the second quarter. But Samsung's growth has stalled amid Xiaomi's rise. Meanwhile, iPhone vendor Apple managed to increase its share of the overall global smartphone market with 15.1% share.

"We estimate China has overtaken the USA being the largest single market for Apple iPhone this quarter, for the first time ever," Strategy Analytics wrote in a release. 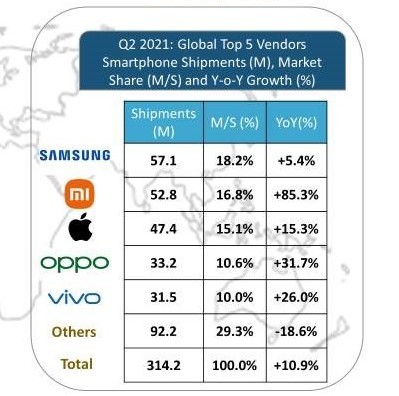 Another interesting dynamic in the global smartphone market: The cost of phones is increasing, partly due to the inclusion of 5G technology. Specifically, Strategy Analytics predicts that the global, average wholesale unit price for smartphones will rise 11% year-over-year to $310 in 2021, up from $279 in 2020. Partly as a result, global smartphone wholesale revenues are to hit a record $435 billion in 2021, the firm predicted. 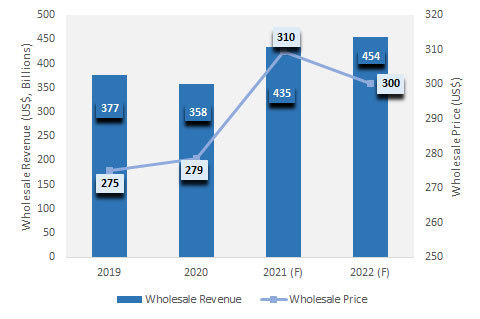 The cost of smartphones is rising.
(Source: Strategy Analytics)

Feeling the impact of component shortages

Those component shortages have already tripped up some smartphone makers. "Samsung has really fallen behind the eight ball relative to other OEMs [original equipment manufacturers] on the global supply chain issue," said T-Mobile CFO Peter Osvaldik during an investor event last month. Specifically, Osvaldik noted that Samsung discontinued its Galaxy Note smartphone "which many of our customers just loved," and that many of the company's S-series smartphones "are in very short supply."

Continued Osvaldik: "Others that have a more Apple-oriented base are probably less likely to be impacted by this."