Samsung chip shop is cooking on gas, but it probably won't last

The COVID-19 world's insatiable hunger for semiconductors has transformed the companies that make them into some of the most prized stocks. Taiwan's TSMC, which dominates production of the most advanced chips, has watched its share price soar 131% since March 2020, when people started raiding supermarket shelves for toilet roll and retreating tortoise-like into the protective shell of their gadget-filled homes. Samsung, TSMC's main chipmaking rival, is up 64% over the same period.

The South Korean electronics giant is now guiding for a surge in revenues for the final quarter of 2021. In the usual brief statement Samsung issues in advance of more detailed earnings reports, it points to a sales increase of about 23%, compared with the year-earlier quarter, to roughly 76 trillion Korean won (US$55.9 billion). Profits are expected to soar, too. The midpoint of its guidance represents a 52% rise in operating profit, to KRW13.8 trillion ($10.1 billion).

The lack of detail and commentary in these updates makes it impossible to be certain about the source of growth. And Samsung does a lot more than just make chips. Besides being the world's largest manufacturer of smartphones, it also churns out TVs and various other consumer devices. A division that makes wireless networks is growing. In the last 18 months, it has landed 5G deals with America's Verizon and the UK's Vodafone.

Chipmakers before and during the pandemic 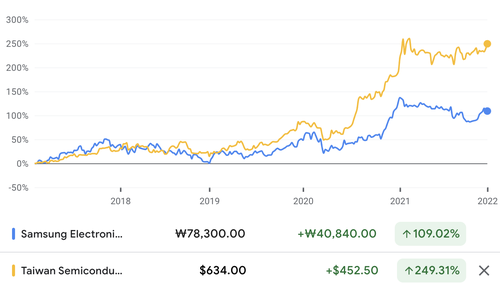 But chips have been largely responsible for more recent financial success. The unit Samsung breaks out as "semiconductors" generated 36% of its sales for the third quarter of 2021, a rise of eight percentage points year-on-year. While total revenues were up one tenth over that period, semiconductor sales gained 40%.

The contribution to profits is even greater. For the third quarter of 2020, semiconductors accounted for about 45% of the South Korean firm's operating profit. With the world starved of chips and prices rising, that figure had risen to 64% just a year later. Semiconductor profits rocketed 82% over this period, while total operating profits rose 28%.

In providing its outlook for 2022, Samsung previously said it expects to see "robust" demand for memory chips as business customers pump money into IT systems. It is expanding its line-up of system-on-a-chip products for mobile customers and investing in state-of-the-art technologies. It boasts an "industry first" on the development of 3-nanometer chips.

The main short-term risk to the company is of factory closures prompted by the pandemic. In China, a manufacturing location for Samsung, authorities continue to pursue a zero-COVID strategy that has meant lockdowns and other draconian restrictions for citizens and companies.

"Due to the ongoing COVID-19 situation, we have decided to temporarily adjust operations at our manufacturing facilities in Xi'an, China," said Samsung in a statement issued on December 29, days after Chinese authorities put Xi'an into lockdown. While the extent of the disruption is unclear, Samsung also said it would "take all necessary measures, including leveraging our global manufacturing network, to ensure that our customers are not affected."

Strange as it might seem now, the next few years are likely to bring a semiconductor glut that forces down prices and wipes out profits for some of the world's biggest producers. Both for geopolitical reasons and to address supply constraints, Samsung is ramping up investments in new facilities, including a $17 billion fab in Texas.

It is not the only chip company with big spending plans. California-based Intel has said it will invest between $25 billion and $28 billion in capital expenditure this year, up from just $14.3 billion in 2020. TSMC is budgeting for $30 billion in capex this year. "In 2020, the capital intensity was 38%. 2021, this year, is going to be over 50%," said Wendell Huang, TSMC's chief financial officer, on the company's third-quarter earnings call.

The industry, he told analysts, is entering a high-growth period due to the "megatrends" of 5G and high-performance computing. "As a result, we expect the capital intensity to be relatively higher than previous years, like in 2020, for the next two or three years before gradually coming down to maybe the mid- to high 30s level from what I can see at this moment."

Price rises this year will be tough for major customers, including makers of 5G equipment like Ericsson and Nokia. But the money going into semiconductor facilities could mean the squeeze does not last into next year. For Samsung and its rivals, a future deluge of expensively produced components may be very hard to clear.