Rakuten's 4G rollout is holding up a 5G push

Building a mobile network from scratch ordinarily requires a wallet as fat as Elon Musk's (he prefers satellites, though).

Thanks to open RAN, and various other mystifying new technologies, Japan's Rakuten has reckoned it can slash about 40% off the normal budget for capital expenditure.

Its case was somewhat undermined at the start of the year when it figured that 27,400 4G basestations were not going to be enough for a near-nationwide service. Another 16,600 would be needed, inflating its bill by 30% to 40%. The even bigger worry is that its 5G rollout has barely started.

By the end of March, Rakuten had installed only about 1,000 5G basestations, compared with roughly 18,300 4G ones (the figure it provides in its last earnings update). This puts it well off the pace set by some rivals.

KDDI, for instance, was boasting a figure of 10,000 5G sites in its last earnings statement, and NTT DoCoMo claimed to have 7,100. Japan's newest operator is putting most of its effort into an ageing mobile standard. 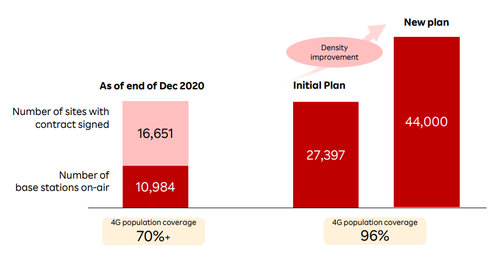 The 5G news is not all bad for Rakuten fans, however. In April, it secured another 20MHz of spectrum in the 1.7GHz band that it can use to support 5G services. That adds to its 100MHz in the 3.7GHz range and another 400MHz of millimeter wave spectrum.

Its lack of 4G spectrum compared with rivals seems largely to explain why it needs additional basestations. It is at no such disadvantage in 5G.

Unfortunately, the effort now required on 4G means a 5G push will not start until later in 2021.

"Maybe by September this year, I will be able to publicly announce a mass acceleration plan for 5G," says Tareq Amin, Rakuten Mobile's chief technology officer.

"In an ideal world, we would love to have a one-for-one mapping on the 5G layer with this 1.7GHz spectrum. It really changes our perspective about certain geographies and areas. We will launch with 1.7GHz and [for] certain geographies now that require ultra-capacity we'll deliver it on 3.7GHz and millimeter wave."

By September, though, Rakuten is likely to be even further behind its rivals. NTT DoCoMo, Japan's biggest operator, aims to have 20,000 5G basestations up and running by March next year, while both KDDI and SoftBank are aiming for about 50,000. The most enthusiastic Japanese consumers may already have settled in for a long 5G ride with Rakuten's competitors.

Unlike in 4G, Rakuten refuses to disclose 5G buildout targets at this stage, but it does not anticipate having to adjust its original budget. "I can't comment yet on the exact site count, but we will build 5G on the capex numbers that we have publicly communicated in our financial announcements," says Amin.

The original intention was to spend about 600 billion Japanese yen (US$5.4 billion) on 4G rollout and another JPY200 billion ($1.8 billion) on 5G. After revising its 4G basestation targets, the entire budget is now more like JPY1 trillion ($9 billion), and only 20% of this is meant for the newer mobile technology.

Is this even realistic? Possibly. Rakuten can obviously make use of the same underlying site infrastructure and transport technologies it is currently deploying for its 4G service.

Yet 5G could demand a denser network "grid" than Rakuten's 4G one, largely because signals do not travel as well in the higher frequency bands. Amin says his new-look technologies bring site coverage improvements, but installing 5G at every one of Rakuten's 44,000 4G sites would mean having just 3.5 for every 10,000 people. The equivalent number for all the 4G sites in South Korea is 56.

Nor is there obvious financial provision for the 5G rollout. On first-quarter sales of JPY391.5 billion ($3.5 billion), Rakuten's overall net loss hit about JPY25.8 billion ($230 million) because of its ambitious telecom project.

The additional 4G effort required has forced it to sell shares worth $2.2 billion to Japan Post, Tencent and Walmart to fund construction. But hardly any of those funds have been allocated to 5G.

Delaying "mass acceleration" of 5G to September could make financial sense. Until it has nearly finished its own 4G rollout, Rakuten needs to pay for the use of KDDI's network.

"The reason we are putting a lot more effort into 4G is because we need to build the foundation of coverage and move away from dependency on roaming," says Amin.

But not everyone is convinced Rakuten will be able to afford the additional work. In a country of 126 million people, it has managed to attract only about 4 million customers since launching its service in April 2020.

Equity analysts at New Street Research reckon it needs 20 million just to break even. The challenge of "4G entry in a market migrating to 5G" was one of numerous hurdles they described in a paper issued last month. Rakuten "faces several years of multi-billion-dollar losses in mobile in our view and no obvious route to fund this," they wrote.

Amin seems to revel in proving his critics wrong, and there was good publicity for Rakuten when Umlaut, a market research firm, recently said its 4G service in Tokyo measured up to some of the world's best. But succeeding in 5G, both technically and financially, may be his toughest challenge yet.