Rakuten says chips crunch is 'much worse' than expected

Consumers have grown used to long store queues in the age of social distancing. The same goes for the organizations that buy semiconductors. This used to be a relatively quick and easy affair. But amid an unceasing pandemic, surging demand for electronics and a trading spat between superpowers, businesses today face a long wait for their chips. And it is threatening a full-blown economic crisis.

Unlike the automotive sector, the telecom industry has looked relatively unscathed so far. But it seems increasingly vulnerable. In April, Nokia CEO Pekka Lundmark aired some concern about the crunch. "I believe we will continue to do a great job, but it would be naïve to say there are no risks because visibility is not what it was," he told reporters on a call about results. The latest warning from Tareq Amin, the chief technology officer of Japan's Rakuten Mobile, indicates long-term disruption is now unavoidable.

"The situation is actually, honestly speaking, much worse than I had anticipated," Amin told reporters and analysts earlier today. "The mid- to long-term outlook I don't think in this industry is looking necessarily great. Everyone I talk to tells me this will be an uphill battle for the next 24 months." 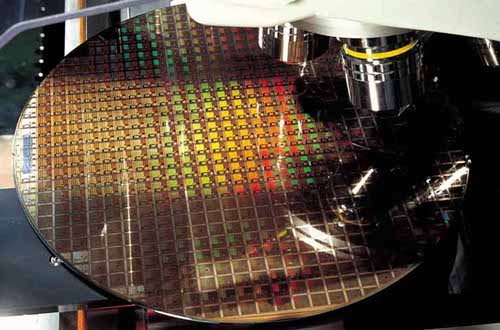 The silicon wafer used inside one of TSMC's fabs in Taiwan.

Amin seems to have based his assessment on conversations with company bosses at Broadcom, Qualcomm, Intel, Nvidia and NXP, several of the main semiconductor firms that serve the telecom industry. And he is sanguine about his own immediate situation. "Luckily, I have purchased and forecast and placed orders well ahead of time before shortages have happened, whether it is servers or products and components for remote radio heads or even products we need for terminals we are building under Rakuten," he said.

But he has already seen evidence of growing delays. TSMC, the Taiwanese foundry with a near monopoly on the manufacture of high-end chips, has already told him not to expect any parts to arrive for two months. "My worry is not about cost but about my ability to procure and supply the hardware products that are needed to continue to meet the build plan numbers that we want to finish."

Crunch to hurt big vendors, too

Known historically as a smaller, Japanese version of Amazon, Rakuten is busy constructing a fourth mobile network in Japan that takes advantage of the latest cloud and software technologies. Amin has relied more heavily than traditional service providers on general-purpose processors and server equipment normally intended for the IT sector.

His background on the vendor side  he previously worked for China's Huawei, among other firms  and interest in shaking up the supply chain have made him more intimately familiar with the components market than many telecom technology executives. "He is close to semiconductor companies and has been working with them directly for the Rakuten Mobile deployment," says Gabriel Brown, a principal analyst with Heavy Reading, a sister company to Light Reading.

Typically, says Brown, the big equipment vendors would have greater oversight of the supply chain. "This is part of what the vendor does  they are supposed to keep the supply chain stocked and running so you don't have to," he explains. "That is value add by a vendor, if they are doing it right."

Amin now thinks supply problems will be as problematic for Ericsson and Nokia as they are for companies using general-purpose equipment. "This supply chain issue is hindering and impacting worldwide infrastructure and so I think everyone has to start watching this and learning," he said. "Understanding how to mitigate this is going to become an art."

Ericsson partly attributed a 26% year-on-year drop in operating cash flow for its recent first quarter to "buffering up on critical components," in the words of Carl Mellander, its chief financial officer.

"With some of these components it is difficult to have a dual-vendor strategy," said Fredrik Jejdling, Ericsson's networks boss, during an interview with Light Reading when results were published.

One specific delay that Rakuten experienced came when it was buying what Amin described as a "simple switch" from Broadcom for its baseband equipment. Ordinarily, procuring that switch would take between four and six weeks, according to Amin. The waiting time is now a staggering 56 weeks, he said on today's call.

To provide additional capacity, TSMC has promised to spend as much as $100 billion on new facilities over the next three years, including a $30 billion investment it made in 2020. But it warned investors in April that facilities would not be ready soon. "Building a fab from start and installing capacity  it won't be available until 2023 and so this year and next I still expect the capacity tightness will continue," said CEO CC Wei on a call with analysts. "In 2023 I hope we can offer more capacity to support our customers."

Intel is also investing in new manufacturing facilities in Arizona but these are unlikely to be up and running until 2024. In March, the US firm said it would pump $20 billion into two new factories that will produce chips based on other companies' semiconductor designs. Intel has said the investment will generate 3,000 high-tech jobs as well as more than 3,000 roles in construction.

Amin is not the only telecom executive sounding the alarm about component shortages. Just a few days ago, the NTCA, which represents broadband operators in rural America, said members were reporting average delays of three to four weeks because of chip shortages. In some cases, said the NTCA in a filing with the Federal Communications Commission, operators had been unable to procure equipment for the "2021 construction season," it said.

Recent stockpiling of chips by some companies may have led to even worse shortages for others. Inventory levels rose sharply at Huawei in 2019 and 2020 when US sanctions began cutting it off from important suppliers, including TSMC. Huawei's inventory and contract costs soared 73.4% in 2019, to about 167.4 billion Chinese yuan (US$26.1 billion), and they were roughly the same in 2020.