Rakuten is "on track" to become the number-one mobile operator in Japan, proclaims a busy and colorful slide in its latest earnings presentation. Rakuten Card, the Japanese firm's financial service, took nearly five years to attract 2.9 million customers, a feat its fledgling mobile business accomplished in about 11 months. Keep up this "superfast acquisition" and Rakuten Mobile would reach 23 million customers, the number Rakuten Card serves today, in just four years.

That would still leave it some distance behind NTT DoCoMo, currently Japan's largest mobile operator with more than 80 million customers. Nor do analysts think Rakuten can afford to wait years. Its operating loss soared 85% for the recent six-month period, to about $900 million, as the cost of building a new mobile network tore into company profits. New Street Research says it needs 20 million customers just to break even.

Confidence that it can stem losses by 2023 has dipped, according to the research company. Rakuten reported about 4.42 million customers in June, with growth slowing after it ended a promotional offer in April. Due to worldwide semiconductor shortages, it will miss a target of covering 96% of Japan's population with its 4G service this summer. The expected delay of several months, until the end of 2021, will force it to spend more on the use of rival infrastructure. 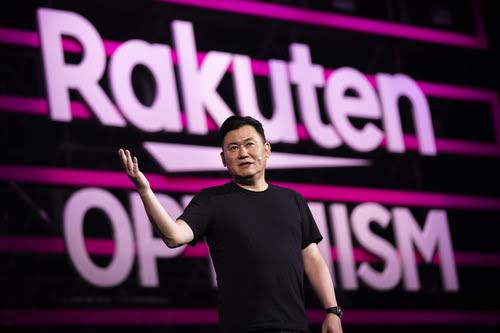 That all helps to explain why the bigger telecom opportunity for Rakuten might be in the role of vendor, rather than service provider. This was conceivably the company's plan all along  to prove the case for building a new-look network and then sell its expertise and technology to operators in other countries.

Valued at up to $100 billion annually, this addressable market could be worth as much as $150 billion by 2025, says Rakuten. Contrast that with NTT DoCoMo, which made about $25 billion from mobile services last year and expects revenues to shrink in 2021. If Rakuten's forecast is realistic, the attraction is not hard to see.

Operators do not typically moonlight as vendors, but Rakuten is hardly typical. It is perhaps better known as a Japanese version of Amazon (albeit much smaller), with interests that span ecommerce, consumer finance, television and several other Internet services. The diversification into the capital-intensive mobile telecom sector is as daring and radical as anything it has attempted before.

Rakuten's formula for success is premised heavily on its belief that new cloud and software technologies  of the kind already used by Internet companies  will allow their owners to undercut rivals stuck with older networks. It has repeatedly said it expects to slash 40% off its capital expenditure and 30% off operating costs by taking advantage of automation, virtualization and concepts such as open RAN, an industry attempt to boost interoperability and competition among suppliers of mobile network kit.

Whatever one makes of these claims  and Rakuten is not short of critics  the company as vendor is pitching to a receptive audience. Rakuten-like technologies, and especially open RAN, have surged up the telco agenda. Regularly thwarted in their efforts to grow sales, operators have shifted their attention to being as lean as possible. Many have expressed dissatisfaction with their current line-up of vendors and complained about a lack of competition in the mobile kit market.

Sustained interest in Rakuten owes much to Tareq Amin. Hired in June 2018 as Rakuten Mobile's chief technology officer, he previously led the rollout of a new mobile network in India for Reliance Jio, now that country's biggest operator. Before that, he spent time at Huawei, the controversial Chinese company that has dominated industry headlines in recent years.

Articulate, astute and ambitious, Amin has become a kind of Robespierre to the guillotine-sharpening sans culottes of telecom, a firebrand determined to unseat the industry's incumbents and bring revolution to the airwaves. Au fait with the complexities of the supplier market, he has shown a much stronger desire than most telco CTOs to shape the technologies the industry will use. He seems to hold unusual sway over suppliers such as NEC, a Japanese maker of mobile kit, and has pushed Rakuten to buy smaller vendors such as Altiostar and Innoeye.

Those companies form part of what Rakuten calls the Rakuten Communications Platform (RCP), the portfolio of technologies it uses in Japan and is now pitching to other service providers. Besides Rakuten's own software and services (Altiostar, Innoeye, plus automation and orchestration tools developed internally), RCP includes partner products. Rakuten's seriousness about the venture was shown earlier this month when it launched Symphony, a new division that will look after its vendor business. Amin has been named as Symphony's CEO.

Rakuten's $100 billion estimate for the size of the addressable market seems plausible. It includes the full range of technologies that a mobile operator would need, from the radio access and core networks to all the IT systems and supporting services. But Rakuten faces stiff competition, from traditional vendors like Ericsson and Nokia to the Internet giants of Amazon and Microsoft. Realistically, it cannot hope to capture anything but a small share of this market. 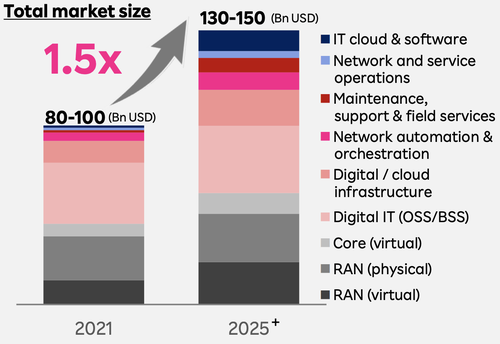 Its forecast for growth is also described as "optimistic" by Gabriel Brown, a principal analyst with Heavy Reading (a sister company to Light Reading). It implies the industry is about to witness an investment boom in cloud-based IT and software, for instance. If existing operators were to spend so much more on their mobile networks, they would have to make enormous cuts elsewhere to avoid hurting profitability. No brownfield operator is guiding for an increase in overall capital expenditure on the scale of Rakuten's forecast, which also rings discordantly with its claims about cost-saving technologies.

It is true that 5G is set for a decent uptick in spending this year. Dell'Oro, a market-research firm, reckons investments in the radio access network (RAN) will rise 10% globally in 2021. Nor does Ericsson think this will be the peak year of 5G investment. The Swedish equipment maker anticipates a growth curve that will taper off before 2025 and then plateau, thanks to later-stage 5G investments by the enterprise sector.

The increase illustrated in Rakuten's chart is dramatic, though, implying the RAN market will be roughly 30% bigger by 2025. This seems improbable unless dozens of other companies decide to follow Rakuten's example and build "greenfield" networks from scratch. And Rakuten is not a compelling advert today. Its difficulties in Japan, even with all its trendy tech, will probably have discouraged some prospective investors. 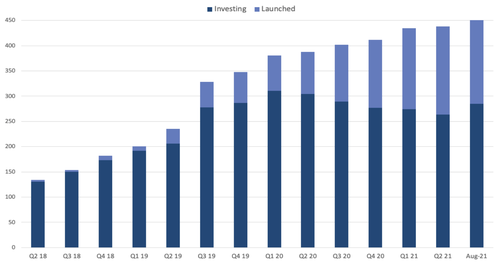 Besides Rakuten, the only notable greenfield mobile networks under construction in developed markets are American and German. Dish, a pay-TV company founded by US billionaire Charlie Ergen, is building America's fourth nationwide mobile network on Rakuten principles. While it does not have a turnkey deal with Rakuten, it is using some of the same suppliers and buying RAN software from Rakuten's Altiostar subsidiary. A firm called 1&1 is the German equivalent, having picked up 5G spectrum licenses in the country's 2019 auction. This month it became Symphony's flagship customer.

These two companies and Rakuten will account for only a small share of spending, and most existing operators are unlikely to have much use for Rakuten as a provider. Just-published research by the Global mobile Suppliers Association (GSA) indicates that 461 operators, spread across 137 countries, are now investing in 5G. Many have already signed contracts with traditional 5G kit vendors, including nearly all the big carriers in Asia, Europe and North America.

Rakuten faces several problems with Symphony. The first is open RAN's immaturity and operators' wariness of the technology. After the recent deal-making between service providers and traditional vendors, open RAN could be left with a very small share of the market until it has matured and 5G kit needs replacing. Dell'Oro and Omdia (whose parent, Informa, also owns Light Reading) do not expect open RAN to account for more than roughly 10% of total RAN spending by the mid-2020s. This alone implies Rakuten's addressable market is much smaller than its estimate.

The second, related problem is the risk Symphony hits a bum note with the open RAN tune. One of the concept's key attractions, supposedly, is that it would let operators take RAN components from a multitude of vendors, instead of buying all their products from one vendor's system, as they do today. Yet as a turnkey vendor, with a full stack of products, Rakuten would look much like Ericsson or Nokia, and it would certainly play the same (and critical) systems integrator role as the Nordic giants.

Even if Rakuten's RAN products are more easily "swappable" than traditional components, would the commercial terms of a turnkey Symphony contract support a straightforward replacement? While RCP features partner products, it seems unlikely that it will ever include RAN software alternatives to Altiostar, such as Mavenir or Parallel Wireless. As outsiders and rivals, how could those companies feasibly substitute for Altiostar in the Rakuten orchestra?

Clearly, if Rakuten can make this happen, it will have to split revenues with those firms, something it must already do with RCP partners. Even if Rakuten eventually buys some of these companies or extends the reach of its own technology, it has no stated desire to be a hardware vendor. Instead, it has unveiled plans to create an open book for component-level pricing and allow other service providers to order validated and certified products directly through Rakuten. For these products to be competitive, Rakuten's cut will presumably have to be very small.

Making money from hardware is probably not the main idea, according to Heavy Reading's Brown. "One motivation for Rakuten could be to drive more volume through its supply chain," he told Light Reading when the plans were first announced. "As an individual operator specifying its own equipment, it has limited volume and pushing more through this channel will help it, and its suppliers, sustain this open networking model."

Sales and losses at Rakuten Mobile

For all the doubts about Symphony, the initiative has momentum. Rakuten boasts deals of one kind or another with 11 companies and claims to be in talks with another 22. A mere handful of turnkey deals could make a big difference to sales. While Rakuten has not disclosed the financial terms of its 1&1 deal, the contract is worth between $2.3 billion and $2.7 billion over a ten-year period, reports Nikkei Asia. By contrast, Rakuten made about $1.8 billion in revenues at its Japanese mobile business in the last year.

With even a half-decent share of Japan's mobile market, Rakuten would be able to generate several billion dollars annually in telco revenues. That is probably more than it could ever realize in vendor sales unless it can rapidly dislodge major suppliers to brownfield operators. But its Japanese mobile business has struggled to attract consumer interest as quickly as Rakuten would have hoped, while Germany's fourth operator has given Rakuten the sort of job that might normally go to a Nokia. If Rakuten's domestic difficulties are not too off-putting, Symphony could really make some noise.