Tareq Amin managed to avoid any blushes while his boss likened him to a couple of the world's best-known technology entrepreneurs as well two of its most famous soccer players. "In the network sector and mobile, he is the Steve Jobs or Elon Musk," gushed Hiroshi Mikitani, Rakuten's CEO, seated alongside Amin on stage in Tokyo today. "He is going to make a bigger impact than Iniesta. Messi and Iniesta added and divided by two is Tareq," he added, confusingly.

In a sector that is often compared unfavorably with Big Tech, Amin has certainly drawn attention. Recruited by Mikitani in 2018 from India's Reliance Jio, he has led the rollout of a software-based and "cloud-native" mobile network in Japan as chief technology officer of Rakuten Mobile, the subsidiary Mikitani set up. The comparison with Jobs, no doubt, is flattering: Rakuten has not (yet) had the same impact on networks that Apple had on gadgetry (or, for that matter, Iniesta had on football). But Amin has a vision that everyone  whether critic or admirer  seems to be constantly discussing. 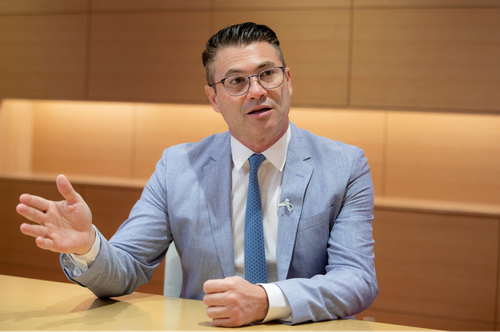 From late March, he will step into the CEO job at Rakuten Mobile, replacing Yoshihisa Yamada, who will continue to have a group advisory role, according to a Rakuten spokesperson. Amin has already been appointed CEO of Rakuten Symphony, the international unit selling Rakuten's technologies to other carriers, and relinquished his former CTO role. Working just underneath him as Rakuten president will be Shunsuke Yazawa, the man credited with the success of Rakuten's Ichiba e-commerce marketplace, with both men reporting to Mikitani.

"On the division of responsibility, Yazawa will be chief revenue officer and own the technology deployment and site construction and oversee all the local activities in Japan while I make sure the linkage between the global business and the strategy that is driving Rakuten Mobile is synergized," said Amin. "I look at Yazawa as a partner trying to ignite the next stage of growth."

The hugely expensive project continues to worry parts of the financial community. Despite offering low-cost, all-you-can-eat services to consumers, Rakuten has not grown as fast as it must have hoped. Nearly two years after launch, just 5.5 million people use Rakuten's mobile services, including a few hundred thousand at its older MVNO (mobile virtual network operator) business.

This gives Rakuten a market share of only 2% and puts it far behind mobile new entrants in other countries, including Jio, at similar stages of their existence, according to equity analysts at New Street Research. Net additions have slowed and there is a dwindling base of MVNO customers to migrate.

Mobile losses are currently tracking at about $1 billion a quarter on buildout costs. Yes, the company has reached a 4G population coverage target of 96% four years ahead of schedule, deploying nearly 40,000 sites across Japan. With 4G nearly done, it can also wean itself off a costly roaming deal with KDDI for zones it did not previously cover. But its 5G network comprises only about 4,000 macro sites  far fewer than rivals  and Rakuten plans to build another 10,000 this year. Funding needs remain significant.

In fact, New Street Research envisages a $4.7 billion funding gap between now and 2024  even with an initial public offering of Rakuten Bank, the sale of an $800 million investment portfolio and the generation of profits by Symphony. In a research note issued this week, New Street Research said Rakuten would probably need to raise funds in the next two or three months.

The analyst firm certainly has a more upbeat take on Symphony than it does on the domestic mobile unit. Its bear case is that Symphony will end up with a quarter of the market for open RAN, an umbrella term for more interoperable and virtualized radio access networks. The emergence of such a powerful player hardly bodes well for supplier diversity, a goal of the open RAN movement, but that is another matter.

The problem for Rakuten is the relatively small size of the open RAN market. Dell'Oro, another research firm, predicts the technology will account for 15% of annual RAN market spending in the mid-2020s, sizing the total RAN market at between $40 billion and $45 billion a year. New Street Research broadly agrees. In its bull case for Symphony, it envisages a 50% share (bang goes diversity) of an open RAN market generating $6.8 billion for suppliers in 2025.

But this equates to just $3.4 billion for Symphony, about 14% of what Ericsson made last year. Even if Symphony can achieve an Ericsson-like margin of 15%, its operating profit would be as little as $510 million. This would make only a smallish dent in New Street Research's projected loss for Rakuten Mobile of $2.9 billion in 2025.

One thing analysts may not have considered is a planned push into the enterprise market for communications services, announced today. "We are coming to enterprise this year," said Amin. "We are in the later stage of getting our network and billing systems ready for customer trials and by the second quarter we will begin customer trials."

Besides tailoring its Link communications app to the needs of organizations big and small, Rakuten also sees an opportunity to build private mobile networks for factories and warehouses. The Internet of Things (IoT) is a further target. "Every site deployed has native support for IoT and we are the only operator in Japan with the full capability to support NB-IoT," said Amin, referring to a network technology that has lagged expectations so far.

Rakuten Mobile's management shake-up is a sign of Mikitani's enduring confidence in Amin, despite the concerns that continue to swirl around the mobile strategy. As Rakuten internationalizes, it reflects his globetrotting status as one of the most recognizable faces in telecom  someone, said Mikitani, who can immediately engage top executives at firms like Cisco, Intel and Qualcomm.

But it also moves Amin into a role where he will need to speak as much about sales and profits as he does about software and the cloud. "He is never bound by convention," said Mikitani in what sounded like a eulogy earlier today. The same persuasiveness that overcame doubts about unconventional technology choices may be needed on the commercial side, too.